With the president now infected with the novel coronavirus, there isn’t much in this election year that can be described as “normal.” But among the most abnormal is that a group of lifelong Republicans — political strategists for Republican candidates for the last 30 years — have banded together to mount a rogue offensive aimed at defeating the sitting president of their own party.

They call themselves the Lincoln Project. Named for the “Party of Lincoln,” which they allege has gone so dangerously astray under President Donald Trump that they’ve decided to take the strategic and ad-making firepower they’ve trained for years on Democrats and turn it against their own. And the president’s bout with COVID-19 is not slowing them down.

DYSTOPIA AD
Narrator: How would you rate your response to this crisis?
Trump: I’d rate it a 10.

Some of the most gut-punching, bare-knuckled and most widely-viewed anti-Trump ads of this election season…

…have not come from the Biden campaign.

UN-AMERICAN AD
Narrator: He’s a draft dodger in chief who despises the men and women he supposedly leads.

…to elect a Democrat.

And this week they pounced with a biting ad.

COVITA AD
Singer: The truth is I will infect you.

A parody of the hit “Evita” that’s gone viral.

Steve Schmidt: We are in a war for the soul of this country.

Steve Schmidt, one of the founders of the Lincoln Project, is a longtime Republican strategist who worked in the George W. Bush White House and ran John McCain’s 2008 presidential campaign.

Lesley Stahl: How did serious Republicans decide to go rogue?

Steve Schmidt: We all had a conviction that there are millions of Republicans who look at this debacle and reject it. And what we thought we could do is talk to those voters in the language and the iconography that they understand, connect with them, and persuade them, many of them, to vote for the Democratic nominee for the first time in their lives.

Lesley Stahl: Have you lost friends over this?

Steve Schmidt: For sure. Of course.

He launched the Lincoln Project super PAC in December, with seven co-founders including Rick Wilson, media consultant and ad maker for Republicans like Rudy Guiliani and Marco Rubio. Veteran Republican strategist John Weaver, who also worked with McCain and John Kasich. George Conway, conservative lawyer, and husband of Kellyanne Conway — herself recently diagnosed with COVID-19 — and Reed Galen, who worked on both George W. Bush’s campaigns. Together, more than 200 years of Republican party activism.

Lesley Stahl: Have you given up your careers?

Steve Schmidt: None of us will ever work in Republican politics again. We– we joke that like some of the explorers who came to the new world, they were incentivized by the captain when he burned the ships that there was– (LAUGH) there was no return (LAUGH) going back.

Working from their homes across the country, the Lincoln Project team likes nautical analogies. They call themselves a pirate ship, with Reed Galen helping chart their course.

These buccaneers have made a name for themselves with malicious attack ads, churning out new ones almost daily, most released cost-free on social media.

Rick Wilson is in charge of the ads.

Lesley Stahl: Who are you aiming for? What kind of a voter?

Rick Wilson: So those independent-leaning men, those college-educated Republicans, the suburban Republican women. We understand where these voters are, we understand who they are and how they think. And Lesley, it’s a game of small numbers. I mean, Donald Trump won this election by 77,000 votes in three states.

Reed Galen: We have. We have endorsed Joe Biden. Yes.

Lesley Stahl: It feels like– I’m sure, to the other Republicans, as– as a total betrayal?

Reed Galen: Republicans can call us, you know, betrayers of the faith all they want. We go– we sleep well at night.

John Weaver: I mean, look Lesley. We’ve gone from caring about character, rule of law, defending the constitution, a cogent national security policy, free trade, where are all those issues? Imagine if you had traveled the country for 30 years, fighting for Republican principles, and you learn it was all a lie. No one cares about all the issues that we fought for.

Lesley Stahl: How painful is it for you to turn against the Republican party? Do you ever sit around and talk about… you’re repudiating your life in a way?

John Weaver: Yeah, of course we do. I mean– I mean, we’re busy, but there are moments of melancholy about it. No doubt.

One of the most effective political ads ever was Ronald Reagan’s Morning in America, from 1984.

In May, the Lincoln Project made a version that flipped the original on its head, adding the letter “u” to morning…

The day it was released, the ad got more than half a million views. Among them, the president, who unleashed a tweetstorm at 12:46 a.m., calling the Lincoln Project “losers.“

Trump on tarmac at Joint Base Andrews –5/5/2020
Reporter: Mr. President, do you want to make any comment about this Lincoln Project ad?
President Trump: Yeah, no, I saw it. It’s a group of major losers. They’re Republican losers. And they should call it the “Losers Project.” Okay. Thanks.

Reed Galen: The President attacked all of us by name. Called us losers. And we raised $2 million in 48 hours.

Lesley Stahl: So he’s helping you?

And gave them a strategy…

UNPRECEDENTED AD
Narrator: Here’s what Trump’s own people are saying about him…

…to get under the president’s skin.

UNPRECEDENTED AD
John Bolton: I don’t think he’s fit for office.
Trump: I have the most loyal people.

Reed Galen: We have a standing buy on Fox News in Washington, D.C. with Fox and Friends, Tucker Carlson and Sean Hannity, every night.

Lesley Stahl: Is that because he watches?

Reed Galen: Yes. Because we know he’s in the residence with his super TiVo watching.

Lesley Stahl: Why is provoking him a good strategy?

Rick Wilson: Every time Donald Trump loses his mind and throws things at the wall because a Lincoln Project ad is up, that takes the whole campaign off track. There’s one thing you never get back in a campaign. That’s a lost day.

Lesley Stahl: Are you concerned that you’re stooping to the president’s level of being mean?

Last month, the Lincoln Project got their staff tested for COVID and moved them from around the country into temporary headquarters in Utah.

We joined them for their first TV interview as a group — remotely.

Rick Wilson: Not as tall or athletic. (LAUGHTER)

Much of the focus here in the home stretch is on this team led by Mike Madrid, former political director of the California Republican Party. They run the day-to-day strategy and ad targeting in an expanding number of battleground states.

Mike Madrid: We’ve been focused like a laser beam on certain segments of the Republican electorate.

Lesley Stahl: What about ads specifically for Republican women?

Mike Madrid: The one that analytically has proven the best is an ad called “Memories,” which is an ad that speaks to the loss of the normalcy of life during COVID.

MEMORIES AD
Narrator: These are the memories COVID took from us — a child’s birthday.

Mike Madrid: We find that women move off of Donald Trump first, and then, often, their husband will follow behind them.

They’re targeting COVID ads to seniors too, while they say “Mourning in America” continues to be effective with voters in hard-hit Rust Belt counties. Military-themed ads work across the Republican spectrum. And they’re playing up reports that the president called fallen soldiers “losers” and “suckers.”

With the help of data analysts, including one who’d worked in Major League Baseball, they are trying to take advantage of a shift they’re seeing in the Republican landscape.

It’s a reverse twist on the old Southern strategy where Republicans used racist appeals to attract white voters in the South. And they’re trying to capitalize on it.

Mike Madrid: What we see in the South is more and more people in high-tech industries saying, “This is a politics that I reject.”

Lesley Stahl: So, where are you most focused then? Are you focused in the north Rust Belt? Or in the Sun Belt?

And they’re also focused on Republican senators, attacking them brutally on their fealty to President Trump.

They’ve spent more than a million and a half

LINDSEY AD
Lindsey Graham: We’ll wait ’til the next election.
Narrator: Lindsey Graham has told us who he is.

Attacking him for his flip flop on filling the Supreme Court vacancy.

HYPOCRISY AD
Graham testifying: And you could use my words against me and you’d be absolutely right.

The Lincoln Project has become a lightning rod for criticism from Trump allies.

Lou Dobbs clip
Lou Dobbs: What a nasty bunch of son of a guns.

For being traitors, mercenaries for taking large donations from Democrats. And in this just to maintain their relevance.

Lesley Stahl: And I’m gonna quote, “They’re failed strategists who are doing this for the money.”

Rick Wilson: The easiest way in the world for a Republican strategist to make money right now is to shut up and say nice things about Donald Trump. So clearly, we’re in the wrong line of work.

But they’ve also drawn fire from some on the left, for their own role in creating the Republican politics they now decry.

Lesley Stahl: Do you bear any responsibility, you personally, for bringing the country to where it is?

Steve Schmidt: When I look at the party and I see what it’s become, I think that I was naive about how deeply embedded the racism issue was in the party.

Lesley Stahl: Do you feel at all that you’re making amends?

They’ve raised more than $60 million thus far, and they’re convinced that if they get just 4% of Republicans to switch sides, they’ll succeed in their goal of defeating Donald Trump.

Lesley Stahl: What about the insult that everything you’re doing is just– playing to the choir? You’re–

Steve Schmidt: I think that we have hurt him. We have cut him. We have defined him. We have provoked him. There was not a glove proverbially laid on him for a really long time. And I think we’re amongst the first groups to effectively do that.

Lesley Stahl: Well, you know, you say that and he still has 90% of the Republicans, every poll you see. He could win.

Rick Wilson: Of course he could. Donald Trump could win. This is why, you know, we don’t sleep a lot, and why we’re constantly pushing to expand our envelope because you can’t take chances with Donald Trump. We’re not outta this fight till the fight is done.

Mon Oct 12 , 2020
The Los Angeles Lakers have won the NBA Finals, defeating the Miami Heat 106 to 90 on Sunday, taking the series 4-2 and securing LeBron James’ fourth championship. The win brings an end to a season that was left in doubt after the coronavirus pandemic threatened to upend it. But […] 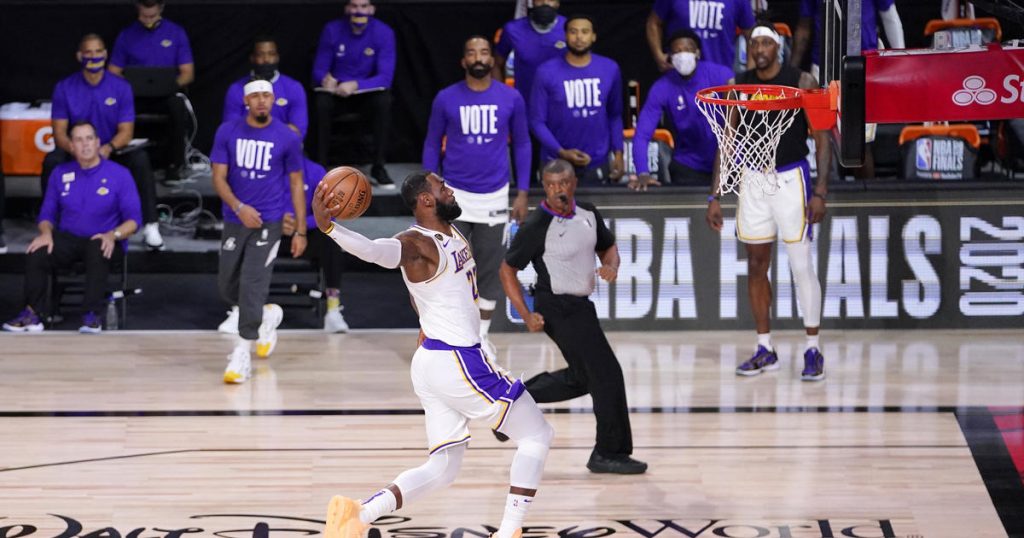