Saudi Arabia says two of its oil tankers were attacked Sunday off the coast of the UAE port city of Fujairah.;

The Latest on the reported sabotage attacks on ships near the Persian Gulf amid heightened tensions between the U.S. and Iran (all times local):

Spain has temporarily pulled out a frigate that was part of a U.S.-led combat fleet from waters near the Persian Gulf, where tensions are mounting between the United States and Iran.

The Spanish Ministry of Defense says the Méndez Núñez frigate, with 215 sailors on board, will not cross the Strait of Hormuz into the Gulf together with the fleet headed by the USS Abraham Lincoln aircraft carrier.

The Ministry declined to elaborate on the reasons of the sudden change.

Spanish media, citing government sources, said Spain is concerned that it could be dragged to an unwanted conflict as a result of the crisis between Washington and Teheran surrounding the unraveling nuclear deal with world powers.

The Spanish frigate was the only non-U.S. vessel in the fleet, which is scheduled to sail to California in late October.

New satellite photos obtained by The Associated Press show the oil tankers that Gulf officials alleged were the targets of “sabotage” off the coast of the United Arab Emirates.

The images, provided on Tuesday by Colorado-based Maxar Technologies, show the oil tankers. Two are from Saudi Arabia, one is Norwegian and the other is Emirati.

A boom surrounds the Emirati oil tanker, suggesting officials worry about an oil leak from the vessel.

Otherwise, the vessels do not show signs of massive damage. The Norwegian ship sustained a hole just above its hull in the incident.

A U.S. official, who spoke to the AP on condition of anonymity to discuss the ongoing investigation, said all the ships sustained similar damage.

Tue May 14 , 2019
article Automaker Volkswagen AG says it is investing 1 billion euros ($1.12 billion) to set up a battery production plant in Germany. Continue Reading Below Chief executive Herbert Diess said Tuesday that the factory is part of the company’s effort to electrify its vehicles. He said the plant will be […] 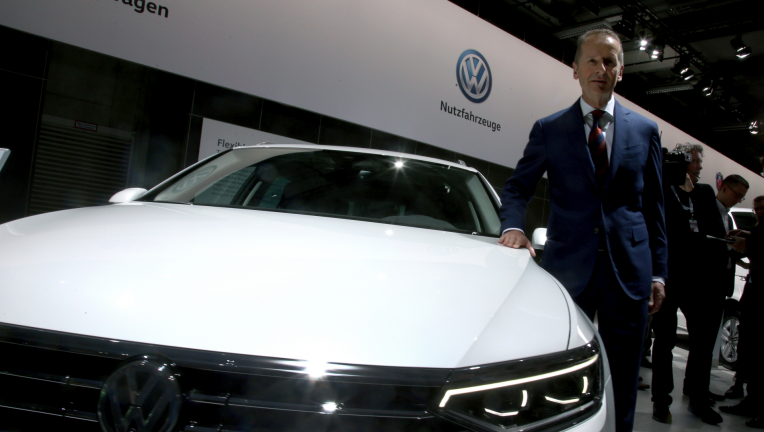