Tesla CEO Elon Musk speaks during the unveiling of the new Tesla Model Y in Hawthorne, California on March 14, 2019.

Tesla finished its second best day of the week on the stock market Thursday after a report that it is reaching record sales numbers.

The stock closed up 4.8%, adding more than $1.6 billion to its market cap, which now sits at $36.4 billion. Thursday marked Tesla’s fifth best performance in 2019. Its best day of the year was Tuesday, when the stock spiked more than 8%, rallying after weeks of uneasiness among investors who questioned the company’s financial health. The stock is also on pace for its best week since October 2018.

Shares of Tesla spiked on a report from Electrek that Tesla executives told sales and delivery managers in North America that the company has already delivered 33,000 vehicles in the region this quarter. That’s more than half the number of deliveries the company made in the first quarter of 2019, when it delivered 63,000 cars, falling short of analysts’ consensus estimates of 76,000.

The incentives are a sharp departure from the “hardcore” cost-cutting measures CEO Elon Musk said the company must undertake despite raising $2 billion in new funds. Musk said the funding would only get the company through 10 months if it kept spending like it had, and said the new measures would be so stringent that he would “personally review and sign every 10th page” of outgoing payments.

According to Electrek, a source on the call with executives said Tesla has delivered 2,512 cars in North America in June so far and it has 10,000 more deliveries scheduled as well as around 6,000 orders matched to an identification code but not yet scheduled.

Tesla’s stock has seen a turnaround as it seems to be approaching its goals for delivery and production. Musk previously indicated in an email to employees late last month that Tesla was on pace to reach its production goals for the quarter.

But the company still faces external threats, like the potential impact of tariffs in China. Last month, Loup Ventures co-founder Gene Munster estimated China deliveries would fall from 70,000 to 40,000 vehicles as some Chinese consumers are likely to avoid the brand.

Thu Jun 6 , 2019
Zoom founder Eric Yuan reacts at the Nasdaq opening bell ceremony on April 18, 2019 in New York City. Kena Betancur | Getty Images Zoom rose as much as 12% on Thursday after the videoconferencing company reported better-than-expected financials and provided an optimistic forecast in its first earnings announcement since […] 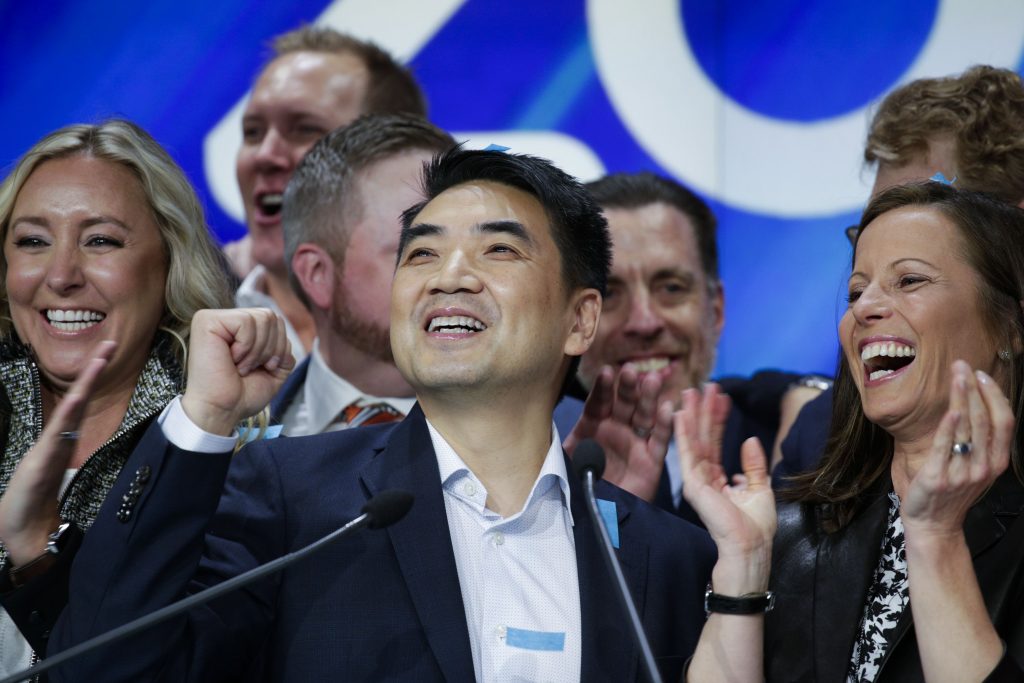