On Sunday House Intelligence Committee Chairman Adam Schiff, D-Calif., announced that an agreement had been reached with the House and the whistleblower who filed a complaint about President Trump in regard to the July phone call between Trump and Ukrainian President Volodymyr Zelensky.

Schiff said, “As with [acting Director of National Intelligence Joseph] Mcguire, that whistleblower will be allowed to come in without White House or DOJ lawyers to tell him or her what they can or can’t say.”

Schiff also added, “We are taking all the precautions we can to protect the whistleblower’s identity. With President Trump’s threats, you can imagine the security concerns here.”

Schiff’s concern with the anonymity of the whistleblower comes after Trump allegedly threatened “the person” who he said gave information to the whistleblower when he spoke with staff from the U.S. mission to the United Nations at a private event in New York.

The whistleblower remains unnamed at this point but much is on the table regarding the testimony to be given before Congress.

Republications will have to pick a side because the impeachment of a president is no small matter.

Trump will also have pressure on himself to rebut the core contentions of the aforementioned phone call.

In an audio posted by The Los Angeles Times Trump said, “Who’s the person who gave the whistleblower the information? Because that’s close to a spy. You know what we used to do in the old days when we were smart? Right? The spies and treason, we used to handle it a little differently than we do now.”

On Sunday Schiff was on NBC’s “Meet The Press.” On that show Schiff said that the president’s behavior was so “egregious” that House lawmakers were forced to open an impeachment inquiry relating to his call with the Ukrainian leader.

Schiff said, “The gravamen of the offense here is the president using the power of his office to coerce a foreign nation into helping his presidential campaign to once again interfere in our election, and at the same time withholding foreign aid that country so desperately needs to fight off who? The Russians.”

He also added, “The situation demands that we move forward with the inquiry.”

The Democrats, if not all of them, then at least the progressive ones want to impeach President Trump and have given the rest of their party no alternative but to initiate an inquiry into impeachment. The fact that no vote to do so was implemented doesn’t seem to bother lawmakers.

Folks, I don’t know about you but, I read the readout of the phone call in question. From the information given, at this point, it appears that former Vice President Joe Biden and his son, Hunter Biden, have a lot more to worry about than Trump.

I’ve always said that the wheels of justice move very slowly but I’ve never waited this long to see justice being served. After all, there is a video which shows that the elder Biden used quid pro quo in getting the top Ukrainian prosecutor, Viktor Shokin, fired.

Biden allegedly wanted the prosecutor ousted to protect his son, Hunter, from being investigated. That fact is adamantly denied by Biden.

The Ukraine’s largest private gas company, Burisma, hired the younger Biden and paid him up to $50,000 a month.

Stayed tuned folks, corruption is abundant in government but the end result of that finding doesn’t necessarily tell the whole story.

Is your popcorn ready? Mine is.

Mon Sep 30 , 2019
PeopleImages | E+ | Getty Images A tantalizing 20% tax break for business owners went into effect in 2018 — and more than 15 million taxpayers grabbed it. The qualified business income deduction is one of the new features of the Tax Cuts and Jobs Act. This new tax break […] 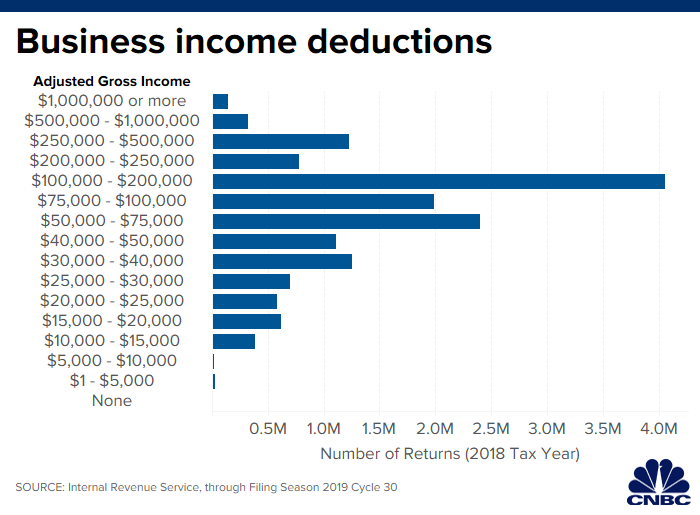