MUZAFFARABAD/CHAKOTHI, Pakistan (Reuters) – Three decades ago, Ali Mohamad says he made a trip into Indian-controlled Kashmir to join a small armed militant group. Now he works in a shop on the Pakistani side of the region, but he hasn’t given up thoughts of returning to the conflict.

After the Indian government clamped down on Kashmir this week, Ali has again been thinking of going back.

“I have not left, we are all watching”, he said, adding that he believes all Kashmiris will take up arms when needed.

“I fought for my rights. When someone crushes you then what else can you do?” said Ali, 53, who was born in Indian-controlled Kashmir and then moved to the Pakistani side.

Seeking to tighten its grip on the region, India this week withdrew special rights for Jammu and Kashmir state. It has cut off almost all communications, prohibited assemblies of more than four people and detained hundreds of political and separatist leaders.

The constitutional change will mean that non-residents will be able to buy property, get government jobs and take college places in the state, to the fury of arch-rival Pakistan, which claims the region as its own and accuses India of trying to change the demographics of its only Muslim-majority state.

It has also angered many on both sides of Kashmir who see India as imposing its will on the region without giving the people a chance of self-determination.

Ali is not alone in wondering whether he might rejoin the armed struggle.

In the 1990s, Tanveer-ul-Islam was one of the top commanders of Tehreek-Ul-Mujahideen, a group resisting Indian rule that was banned as a terrorist organization by New Delhi in February.

He and many other militants renounced violence decades ago, but said some veterans of the Kashmir conflict had been outraged by India’s decision.

“If the situation continues it might compel us to take up arms again. It is not just me, there are many others.”

If the views of Ali and Tanveer are representative of a fraction of the people in Kashmir, it could create a worsening threat of armed attacks for India.

To be sure, the majority of the refugees from Indian-controlled Kashmir whom Reuters spoke to in Muzafarabad, the capital of Pakistani-controlled Kashmir, said they didn’t support an armed struggle, with some saying it just ended up hurting ordinary Kashmiris. Instead, they wanted to see stronger action against India by Pakistan and the international community.

Nuclear-armed neighbors India and Pakistan have fought two of their three wars over Kashmir and engaged in an aerial clash in February after a militant group based in Pakistan claimed responsibility for an attack on an Indian military convoy.

India has long accused Pakistan of funding and harboring the groups. Islamabad denies this, saying it provides only diplomatic and moral support to non-violent separatists on the Indian side.

In the small town of Chakothi, three kilometers (2 miles)from the Line of Control (LoC) that divides Indian and Pakistan-controlled Kashmir, Zeeshan Sadiq said families are beginning to rebuild underground shelters.

“The neighbors also came to stay in here as their bunkers were in disrepair,” Sadiq said, crouched in a claustrophobic reinforced concrete room under his home.

“Now everyone here is rebuilding them”.

Last week, Pakistan accused India of using illegal cluster bombs, killing two civilians and wounding 11. India has denied using such weapons. Exchange of fire between the two countries has intensified in the past few years along the LoC.

The blackout has made communication across the border impossible, residents said.

“I have not heard from them for five days,” he said.

“I spoke to my seven-year-old daughter the night before communication got cut off. She said ‘papa we are troubled here’ and since then I have heard nothing.”

Fighting rages in Yemen’s Aden as U.N. calls for dialogue

Sat Aug 10 , 2019
FILE PHOTO: Smoke rises during clashes in Aden, Yemen August 8, 2019. REUTERS/Fawaz Salman/File Photo August 10, 2019 By Mohammed Mukhashef ADEN (Reuters) – Fierce fighting broke out on Saturday in Yemen’s southern port of Aden between nominally allied forces that have turned on each other, exposing rifts in a […] 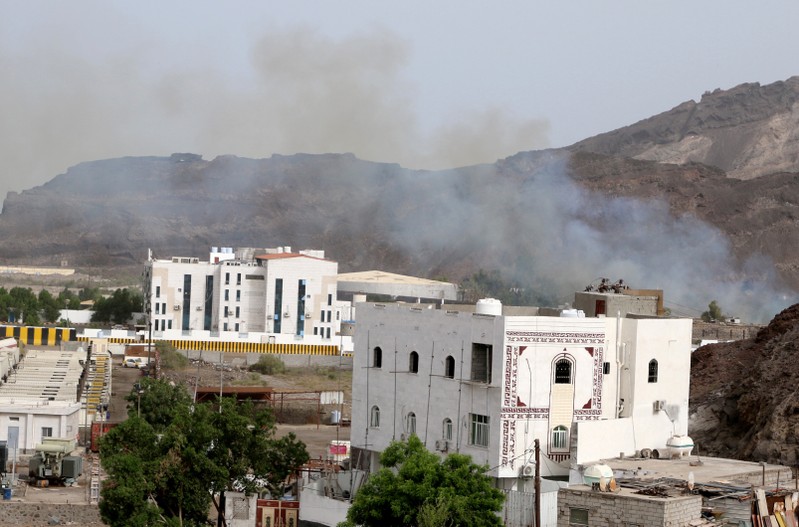