An 80-year-old Chinese tourist has died of the new coronavirus in a hospital in France, French Health Minister Agnes Buzyn said Saturday, confirming the first fatality from the fast-spreading respiratory virus in Europe.

France has 11 confirmed cases of the illness, with more than 63,800 cases around the world, the vast majority of which are in China. More than 1,500 people have died and cases have been identified in at least 27 countries.

Until Saturday, only three countries outside of mainland China had confirmed coronavirus deaths: Hong Kong, Japan and the Philippines.

4:23 pm: Chinese minister says coronavirus hit to Chinese economy will be ‘temporary’ and country will ‘rebound’

“The impact of the epidemic on the Chinese economy will be short term and temporary,” Chinese foreign affairs vice minister Qin Gang said at the Munich Security Conference on Saturday.

“When the epidemic is over, the subdued consumer demand will be released rapidly and the economy will rebound strongly.”

The State Department will provide a chartered aircraft to fly American citizens aboard the quarantined Diamond Princess cruise directly from Japan to the U.S., it said in a statement Saturday. The aircraft is set to arrive in Japan on the evening of Feb. 16, and will land in the U.S. at Travis Air Force Base in California.

Some passengers will then continue onward to Lackland Air Force Base in Texas. All passengers will need to be quarantined in the U.S. for a further 14 days. Those symptomatic passengers unable to board the flight will “receive the required care in Japan,”  the State Department said, expressing its gratitude to Japan for its “extraordinary care and hospitality” and assistance.

“Should you choose not to return on this charter flight, you will be unable to return to the United States for a period of time,” the State Department said. “The Centers for Disease Control and Prevention will make a final determination on this matter.”

Chinese officials disclosed Saturday that travel during the latest Lunar New Year period was a fraction of previous years, as people stayed home and took advantage of refund policies that authorities enacted in an effort to limit the spread of the virus.

China’s aviation authority said since it first announced a ticket refund policy in late January, domestic and foreign airlines have processed 20 million tickets worth more than 20 billion yuan ($2.9 billion). The number of flights has been about a quarter of what it was last year, a representative said.

China’s railway authority said rail trips during the holiday travel period so far have been one-seventh of the 280 million it had anticipated, and that it has processed 11.5 billion yuan ($1.6 billion) in ticket refunds.

China’s central bank says lenders will accept higher levels of bad loans in a bid to support firms affected by the virus outbreak, according to a Reuters report.

It said that situation will be manageable as China has a relatively low bad loan ratio, the report said.

He added that the problem will be manageable as China has a relatively low bad loan ratio.

China’s deputy chair of the banking and insurance regulator, Liang Tao, said Saturday at a press conference that there are already more than 400 insurance products that can cover risks related to the new coronavirus pneumonia.

“Due to the lack of pricing data, and for the protection against violation of consumer rights, the China Banking and Insurance Regulatory Commission prohibits companies from issuing such single-liability products,” Liang said, according to a CNBC translation of his Mandarin-language remarks.

A total of 217 medical teams comprised of 25,633 healthcare workers have been sent to the virus-hit Hubei province as of Feb. 14, according to state-owned media People’s Daily citing China’s National Health Commission. The majority of them are in Wuhan.

On Friday, China said that 1,716 health workers in the country have been infected with the COVID-19 virus.

11:15 am: Trump trade advisor Navarro says drug production could start as soon as this month

He said on the show that the White House is “moving at Trump time” on a treatment drug and are hopeful testing and production could begin “as early as the end of the month, mid-March.”

Navarro told Fox Business Network a vaccine could be “hopefully as early as next November,” adding that five large American companies are working to get 150 million doses of a vaccine ready.

10:40 am: US evacuating citizens aboard quarantined cruise ship off Japan

The U.S. is evacuating its citizens and their families who are onboard the Diamond Princess cruise ship off Japan that has been quarantined for almost two weeks, according to the Wall Street Journal, which cited an official from the U.S. Centers for Disease Control and Prevention.

There will be two evacuation flights from Japan for around 380 people, the report said.

At least 218 passengers on the Diamond Princess were confirmed to be infected.

10:25 am: Support for companies to fight outbreak in China

As of noon on Friday, banks and financial institutions have supplied more than 537 billion yuan ($76.9 billion) in credit to fight the virus, Liang Tao, deputy head of the China Banking and Insurance Regulatory Commission, said Saturday morning at a press conference in Beijing. 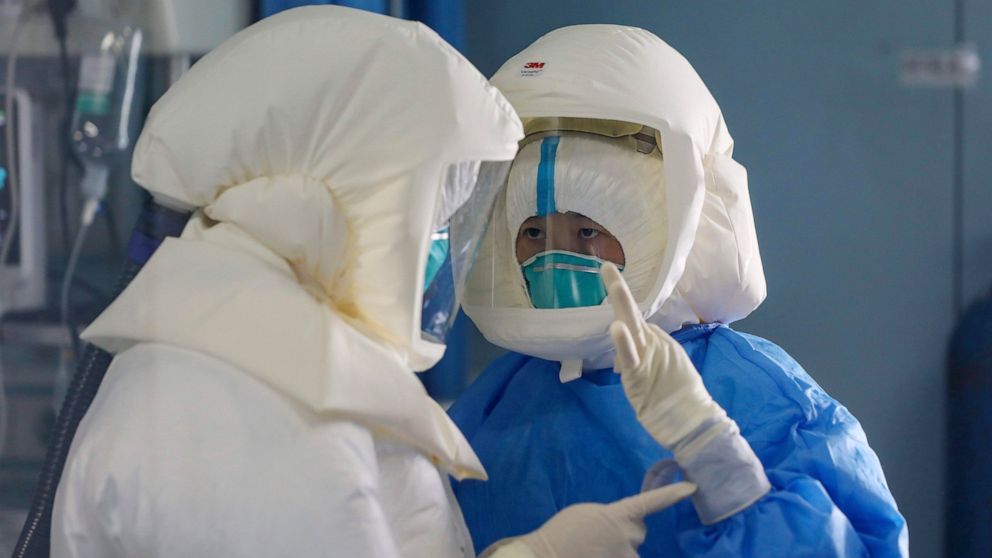