PARIS (Reuters) – Novak Djokovic was under no illusions about the Herculean effort it would take to beat Rafa Nadal in Sunday’s French Open final but even he was surprised by the level of perfection the Spaniard reached to win a 13th title on the Paris clay.

The 33-year-old Djokovic did not play badly in the final but it took him 55 minutes before he registered his first game in what turned out to be a mauling.

By that stage his task appeared about as hopeless as climbing the Eiffel Tower with his arms and legs tied together and although he battled valiantly, he was crushed 6-0 6-2 7-5.

“I don’t have much to say but that I was completely outplayed by Rafa, by the better player on the court,” top seed Djokovic, who many thought was a slight favourite to end Nadal’s domination at Roland Garros, told reporters.

“He was not missing at all and getting every ball back, just playing tactically great. I felt well throughout the entire tournament. I thought I was in a great form.

“Certainly, I could have played better, especially in the first two sets. But he did surprise me with the way he was playing, the quality of tennis he was producing,” Djokovic added.

“He’s phenomenal. He played a perfect match, especially in the first two sets.”

Eight of the first 11 games went to deuce but whenever Djokovic had a sniff of a chance Nadal slammed the door shut. Incredibly, the Spaniard made only 14 unforced errors and while Djokovic made 52, many were the result of desperation as he tried to fathom a way to stop the onslaught.

“No holding him back it seems like. It’s amazing. I mean, I admire all his achievements, I mean, especially the one here,” Djokovic said of Nadal’s record at Roland Garros which now reads 100-2 in terms of wins and losses.

Djokovic had a 37-1 record this year going into the final, his only “loss” being his default at the U.S. Open when he struck a line judge with a ball in the fourth round.

Rarely does the sharp-minded Djokovic make a mistake with his strategy, but he said his ploy to use the dropshot liberally against Nadal, as he had all tournament, had backfired.

Nadal read most of them and Djokovic’s success rate with the shot was mediocre at best.

“It didn’t work great today, let’s say,” Djokovic, who has now lost all three French Open finals in which he faced Nadal, said. “He was winning a lot of those dropshot points.

“I wanted to kind of disrupt his rhythm, obviously. But he was ready. He was there, he was prepared. He was playing all the right shots today.”

Sun Oct 11 , 2020
Scores of people were detained in Belarus on Sunday during protests against the country’s authoritarian leader, who won his sixth term in office in a vote widely seen as rigged, a Belarusian rights group said ByThe Associated Press October 11, 2020, 6:09 PM • 3 min read Share to Facebook […] 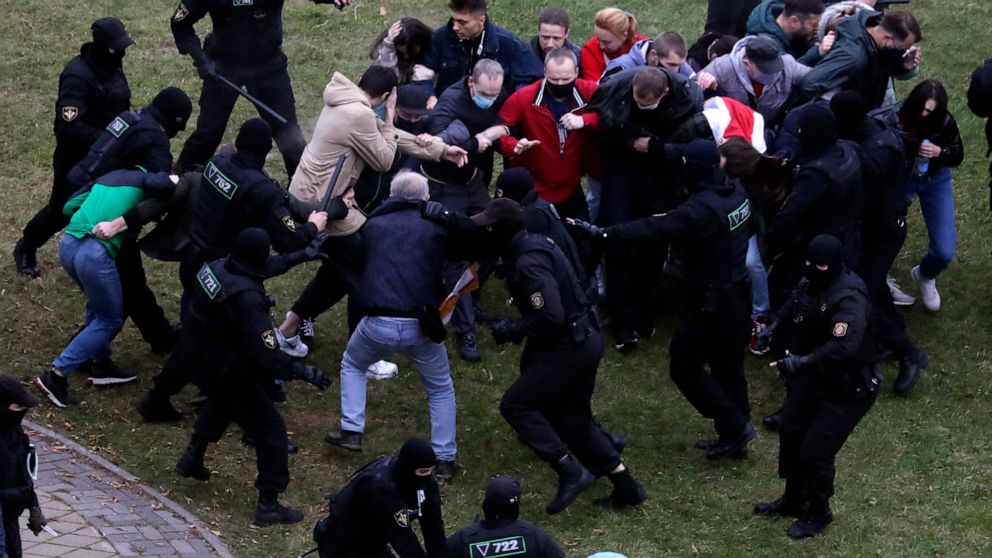