In a world where knowledge is supposed to be power we just witnessed a week where the powerful were completely remiss of knowledge.

The head of the Impeachment Inquiry, now known as Little Shifty Schiff, stated he would do everything he could to protect the name of the Whistleblower while then proclaiming to not know the name of said Whistleblower.

It is but a simple application of logic that it is impossible to protect something, of which you have no knowledge, as one wouldn’t know whether they were being successful, or not, in their plight.

It would be akin to asking a U. S. Marshall to protect a confidential informant yet never introducing the two.

AOClueless was feeling left out of the drama and proceeded to proclaim that Trump was clearly engaged in extortion and bribery.

Fascinating stuff here as most criminals will tell you one doesn’t generally extort and bribe at the same time.

It’s kind of like spitting into the wind . . . or voting Democrat.

Hang in there Alex, only eleven and a half more years to go.

The Speaker of the House stated that President Trump was an imposter.

Grossly Incompetent Pelosi is either under the impression that Mueller’s Russian Collusion Delusion is still on tap or she’s posing as someone who isn’t sober.

The greatest measurement of Democratic fluidity and productivity was the soiling of Eric Swalwell’s pantaloons while “allegedly” flatulating on MSNBS.

Now that was proof of Liberal knowledge.

I’m sure the cows were amused.

LIEUTENANT Colonel Stay Puff Marshmallow VindMan was quite fluffed about his role as Head of all things Ukraine.

Putting aside his ridiculous testimony it is amazing to continuously uncover so many foreign nationals supporting the Liberal Progressive agenda.

Vindman’s paternal connection to Russia only exacerbates Feinstein’s Chinese spy, the DNC’s Pakistanis, the Palestinian Tlaib, the Somalian Omar, the Iranian Jarrett, and La Raza who is everywhere, including but not limited to, Attorney General Xavier Becerra in California and Sonia Sotomayor on the United States Supreme Court.

Add in Obama bending over at the waist to show his flexibility for Putin, and one hundred and fifty-BILLION dollars overnighted to the Ayatollah, that cost the lives of American soldiers, one can only wonder how much longer Americans will allow forty-million plus criminal foreign nationals to run wild in America.

One can only wonder.

Finally, it appears someone connected to the greatest suicide ever has been charged.

My guess is both of them will suddenly come down with terminal cancer or be “robbed” while walking home one night Seth Rich style.

With that said, and there can be no doubt, knowledge alone is currently irrelevant.

As long as the Trump/Barr Justice Department does nothing to stop the Oppression, coming from the Power that hates this country, the degradation and ruin will continue.

"Mobituaries": Reconstruction and the death of representation

Sun Nov 24 , 2019
On May 13, 1862, just over a year into the Civil War, an enslaved man named Robert Smalls, who labored on a Confederate steamer in South Carolina’s Charleston harbor, set into motion a daring plan. As his great-great-grandson Michael Boulware Moore explained, “He saw that the Confederate crew had left, […] 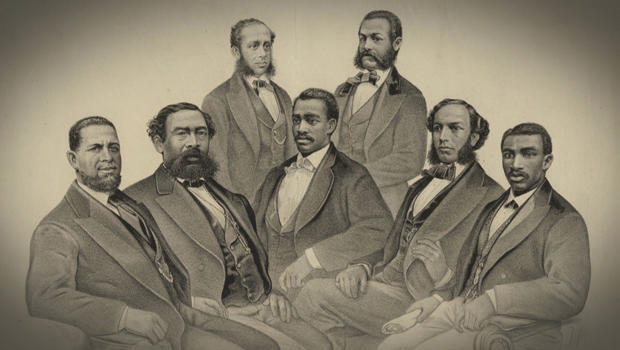