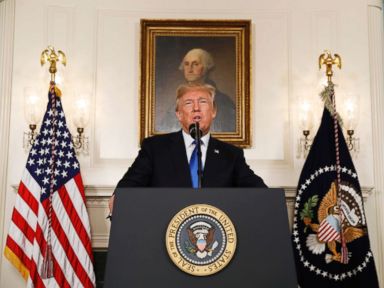 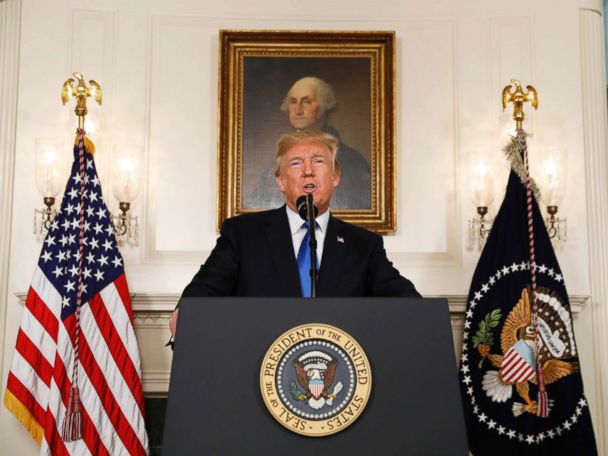 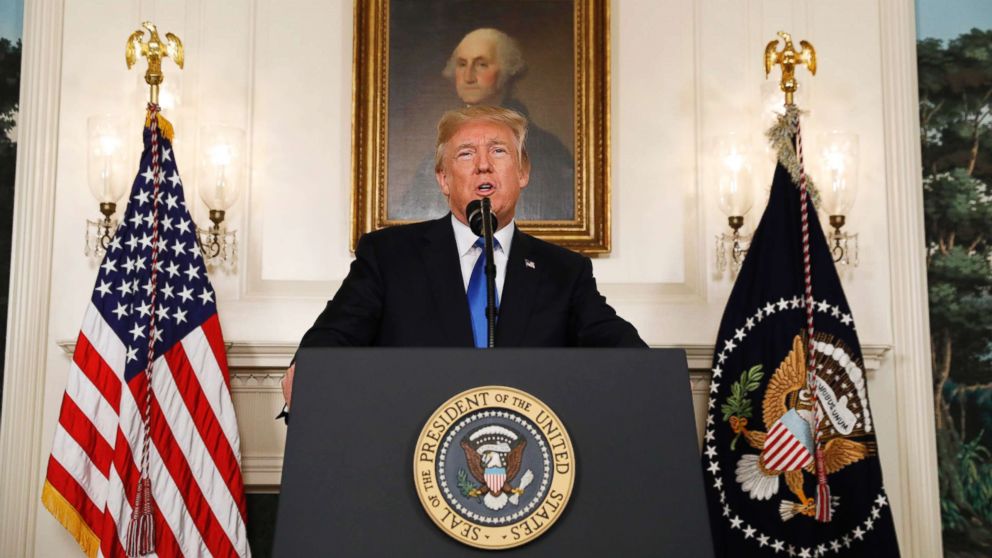 President Donald Trump slammed Iran Friday, called the country a “menace” and announced new sanctions against the regime — but didn’t do anything that would alter the Obama-era deal that he has denounced since his presidential campaign.

The deal, Trump said, is no longer in the national security interest of the United States. This decision, which has been referred as “decertification,” is a shift in official position.

It is a significant declaration that leaves the nuclear agreement in place, but puts Congress in charge of whether or not to follow up with action — triggering a 60-day window for lawmakers to re-impose sanctions against Iran that were suspended in 2015 as part of the agreement.

Trump outlined three steps as part of America’s path forward: to counter “destablizing activity” in the Middle East, impose new sanctions on non-nuclear aspects of the regime and address the country’s nuclear ambitions.

“Our policy is based on clear assessment of Iranian dictatorship, its sponsorship of terrorism and its continuing aggression in the Middle East and all around the world,” Trump said.

While the president portrayed the decision as having originated with his administration, he acknowledged that Congress holds the key to the deal’s future.

“I am directing my administration to work closely with Congress and our allies to address the deal’s many serious flaws so that the Iranian regime can never threaten the world with nuclear weapons,” he said.

Tehran and world powers in July 2015 crafted a deal that eased sanctions on Iran in exchange for stepped-up international monitoring of its nuclear development activities. The agreement reduced the amount of nuclear fuel Iran can keep and extended the “breakout time” needed for Iran to create a single bomb. Some of Iran’s facilities are now also subject to constant monitoring, with others subject to inspections after a waiting period.

The president accused Iran of “not living up to the spirit of the deal,” while the U.S. abides by its promises, despite top officials on his national security team, including Defense Secretary James Mattis, saying Iran has technically complied with its restrictions.

“By its own terms, the Iran deal was supposed to contribute to regional and international peace and security,” Trump said. “And yet while the United States adheres to our commitment under the deal, the Iranian regime continues to fuel conflict, terror, and turmoil throughout the Middle East and beyond.”

Trump also announced sanctions on Iran’s Revolutionary Guard Corps, whom he accused of providing assistance to terrorist groups. He encouraged U.S. allies to take action to counter the group’s efforts “including thorough sanctions outside the Iran deal that target the regime’s ballistic missile program in support for terrorism and all of its destructive activities, of which there are many.”

Even Sen. Tom Cotton, R-Ark., one of the most vocal critics of the Iran deal and supporters of decertification, has recommended holding off on “snapping back,” or restoring immediately, the nuclear sanctions lifted as part of the deal. He called the move a “backward-looking step” and said Congress should instead impose new ballistic sanctions and lift some of the Iran agreement’s sunset provisions which allow some regulatory measures to expire after certain periods.

The goal with such actions, according to Cotton, would be to bring Iran back to the negotiating table to strengthen the original deal.

But some Obama-era officials who worked on the agreement said that hope was unrealistic.

“I would love to see Iran come back to the table, apologizes for everything and agree to all of our demands,” Philip Gordon, White House coordinator for the Middle East during the Iran negotiations, told ABC News. But he called such a notion a “fantasy.”

Sen. Bob Corker, R-Tenn., the chairman of the Senate Foreign Relations Committee who led the charge against the bill and wrote a law forcing congressional oversight of the Iran agreement, has also expressed skepticism that decertifying the deal is the right decision.

“You can only tear these things up one time. It might feel good for a second, but one of the things that’s important for us is to keep our allies with us,” he said, referring to the other signatories of the Iran deal which include China and Russia as well as the European Union.

The White House has been in touch with Capitol Hill for the past two weeks over its Iran decision. White House national security adviser H.R. McMaster was on Capitol Hill Wednesday evening briefing top Republican lawmakers on the administration’s forthcoming announcement.

Secretary of State Rex Tillerson has also been briefing key lawmakers on the administration’s plans for the agreement, and met with Sen. Ben Cardin, D-Md., Wednesday at the State Department.

Sen. Chris Coons, D-Del., who was among a group of Senate Democrats who met with McMaster last week, said the White House was open to negotiating the Corker-authored bill that requires the president to certify the deal every 90 days in the first place.

Coons told reporters in a conference call earlier this week that he believes Trump should just continue to affirm that Iran is complying with the deal but said he’d be open to amending the requirement “if that’s what’s required to get the president to continue to embrace” the Iran deal.