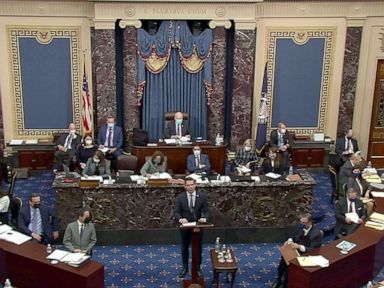 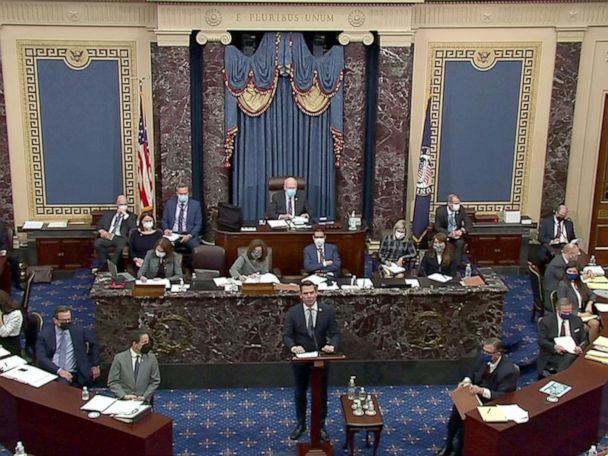 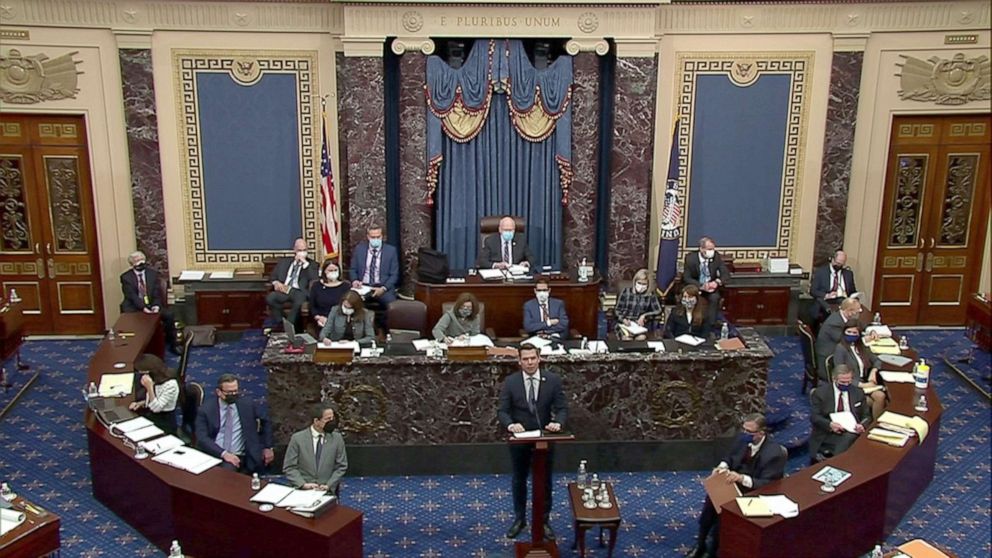 House Democrats wrapped up their opening arguments in Donald Trump’s second impeachment trial Thursday by honing on Trump’s slow response to the Jan. 6 riot and his lack of remorse about the attack – and the weaknesses the riot revealed in America’s system of government at home, and to the rest of the world.

Democrats, who also warned the Senate about the lasting danger Trump would pose if not convicted, were again praised by Republicans for their performance. But they still appear to be short of the Republican support needed to convict Trump, as the former president’s lawyers prepare to mount their defense on Friday.

IN THEIR OWN WORDS: DEMS SAY RIOTERS FELT ENCOURAGED BY TRUMP

After a day of emotional and searing moments on the House floor Wednesday as Democrats played never-before-seen footage of the Capitol riot, managers argued before the Senate that many participants pointed to Trump’s own words to defend their actions, and claimed he had invited their attack.

They also pointed to Trump’s praise for white supremacists in Charlottesville in 2017, and his criticism of Michigan Gov. Gretchen Whitmer’s coronavirus restrictions that led to demonstrations at the state capitol.

“It was a preview of the coming insurrection,” Rep. Jamie Raskin, D-Md., said Thursday.

Rep. Diana DeGette, D-Colo., pointed to Couy Griffin, a local government official in New Mexico who founded the group “Cowboys for Trump” and stormed the Capitol – who was later arrested near the Capitol just days before Joe Biden’s inauguration.

Griffin said in a Facebook video after the riot that there would be “blood running” from the Capitol during Biden’s inauguration. Last year, Trump retweeted a video of Griffin saying, “The only good Democrat is a dead Democrat,” and spoke to Griffin on the phone in 2019.

“They truly believed that the whole intrusion was at the president’s orders, and we know that because they said so,” DeGette said. “Many of them actually posed for pictures, bragging about it on social media, and they tagged Mr. Trump in tweets.”

“This was not a hidden crime. The president told them to be there, and so they actually believed they would face no punishment,” she said, as managers played video of Trump’s rally outside the White House on Jan. 6, where attendees shouted, “invade the Capitol!”

AN APPEAL ACROSS THE AISLE

For the second day in a row, Democrats used the threat rioters posed to Vice President Mike Pence in an effort to court Republican support for conviction.

They also played a slideshow of Republican governors and lawmakers condemning the riot and Trump’s inaction as it unfolded – from Maryland Gov. Larry Hogan, to GOP Reps. Adam Kinzinger and John Katko, who both voted with eight other Republicans to impeach Trump in the House.

Managers cited the words of Trump’s former chief of staff John Kelly – who said Trump “poisoned the minds” of Americans with his unsubstantiated claims of voter fraud – as well as the list of administration officials who resigned in the aftermath of the riot.

“So much for backing the blue,” Cicilline said, in reference to Trump and the Republican Party’s vocal support for law enforcement.

Managers took aim at one of the Republicans’ most frequent criticisms of their case – that it’s not constitutional for the Senate to convict a former president.

Raskin argued that the Senate should move past that “frivolous” question, after it was debated on Tuesday, and six Republicans voted with all Democrats to proceed with the trial.

“It’s not relevant to the jury’s consideration of the facts of the case,” he said.

Instead, he challenged Trump’s team to answer several other questions.

“If a president did invite a violent insurrection against our government, would that be a high crime and misdemeanor? Can we all agree, at least on that?” Raskin asked.

Anticipating another argument from Trump’s lawyers first raised in a Monday brief, Raskin pushed back on the notion that Trump’s Jan. 6 comments to supporters should be considered free speech.

“There’s nothing in the First Amendment or anywhere else in the Constitution that can excuse your betrayal of your oath of office. It’s not a free speech question,” Raskin said, after citing the late conservative Supreme Court Justice Antonin Scalia’s writing on free speech cases.

Trump’s words, he continued, “represented the most devastating and dangerous assault by a government official on our Constitution, including the First Amendment, in living memory.”

Invoking Thomas Paine, Raskin encouraged senators to “exercise” their “common sense” about what happened on Jan. 6

“We need to exercise our common sense about what happened. Let’s not get caught up in a lot of outlandish lawyers’ theories here,” he said.

Rep. Joaquin Castro, D-Texas, argued that the Jan. 6 riot damaged U.S. national security and the country’s standing abroad, introducing a new element to managers’ presentation to the Senate on Thursday.

“Every foreign adversary considering attacking this building got to watch a dress rehearsal, and they saw that this Capitol could be overtaken,” Castro, a member of the House Intelligence and Foreign Affairs Committees, said.

The attack has also impacted America’s credibility with other countries, and ability to promote democracy around the world, he said.

“President Trump gave the Chinese government an opening to create a false equivalency between Hong Kongers protesting for democracy and violent insurrectionists trying to overthrow it,” Castro said.

The line of argument took Democrats away from the central themes of their case this week, but it suggested another attempt to reach Republicans on the bipartisan turf of national security and foreign policy.

EYES ON THE CLOCK

Speaking to reporters Thursday afternoon, Sen. Jim Inhofe, R-Okla., summed up the sentiments of several Republicans on the third day of managers’ arguments.

“To me, they’re losing credibility the longer they talk,” he said.

Even though Raskin and Democrats left time on the table – they ended up not using roughly five hours of the up to 16 hours allotted to them – some lawmakers suggested proceedings should be moving even faster, after the emotionally-charged second day of arguments.

Sen. Elizabeth Warren, D-Mass., told reporters that the managers didn’t need to call witnesses – which the Senate could vote on after Trump’s team argues his case, and four hours of questioning.

“I feel satisfied that the House managers have made their case,” she said.

Trump’s legal team, led by attorneys Bruce Castor and David Schoen, only plan to use a handful of hours Friday to argue Trump’s case.

“I think the end result of this impeachment trial is crystal clear to everybody,” Sen. Ted Cruz, R-Texas, told reporters after meeting with Trump’s attorneys.

Schoen, in a Fox News appearance during the trial Thursday, said the trial should be “as short as possible” and signaled that his team would argue that Trump had nothing to do with the riot after Democrats spent days arguing he had laid the groundwork for months with his words and actions.

“There is no reason for us to be out there a long time,” he said on Fox News.

Black and poor left behind in Florida's vaccine rollout

Fri Feb 12 , 2021
As Florida scrambles to vaccinate residents of the state against COVID-19, a key determinant in whether people are able to get a shot is whether they live in an area that is predominantly White and wealthy. One factor seemingly not playing much of a role: the number of COVID-19 cases in […]