Trump on Sunday increased pressure on China to reach a trade deal by announcing he will hike U.S. tariffs on $200 billion worth of Chinese goods this week and target hundreds of billions more soon.

The announcement via Twitter marked a major shift in tone from Trump, who has cited good progress in trade talks and praised his relationship with Chinese President Xi Jinping.

Chinese officials are scheduled to meet their U.S. counterparts in Washington on Wednesday after meeting in Beijing last week for a round that Treasury Secretary Steven Mnuchin described as “productive.”

Investors responded by bidding up the yen which is considered a safe harbor in times of stress given Japan’s status as the world’s largest creditor and its huge hoard of assets abroad.

The dollar initially fell to a five-week trough at 110.53 on Reuters dealing, having ended Friday around 111.12. It was last at 110.83, with the market again thin as Japan remains on holiday.

The Australian dollar took a spill given the country’s exposure to Chinese trade and lost around 0.6 percent at one stage to $0.6960. It was last holding at $0.6992.

“An increase in tariffs would be bad news for risk assets and would threaten the prospect of a global growth recovery,” said Rodrigo Catril, a senior FX strategist at NAB.

“AUD and NZD are lower at the open as we await for Asian markets to open,” he added. “An aggressive response from China that halts current negotiations, with higher tariffs by the end of the week would be a disaster for risk assets.”

As a taste of what was to come, E-Mini futures for the S&P 500 slid 1.4 percent in early trade and Treasury futures jumped 14 ticks. Nikkei futures were down 2 percent at 22,035, though the cash market will not open until Tuesday.

The U.S. dollar had already softened on Friday when jobs data beat expectations but a soft reading for wages meant the Federal Reserve could afford to stay patient on policy.

The futures market on Monday moved to price in an even greater chance of a rate cut this year as Trump’s tariff warnings was seen as a risk to the global economy and business sentiment.

Futures imply a funds rate around 2.230 percent by December compared to the current effective rate of 2.40 percent.

Sun May 5 , 2019
100 Yuan notes are seen in this illustration picture in Beijing November 5, 2013. REUTERS/Jason Lee May 5, 2019 By Julia Fioretti HONG KONG (Reuters) – A surge in junk-rated bonds has made Chinese borrowers more aggressive, with select ones succeeding in cutting their costs for repaying bonds early, a […] 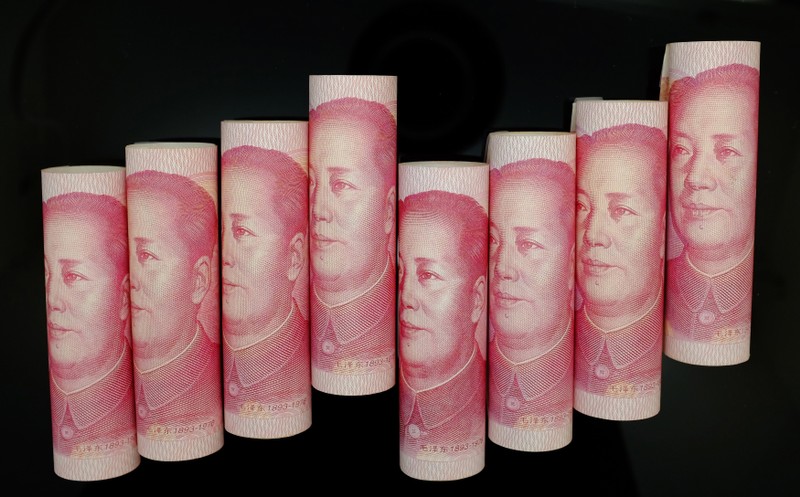