President Donald Trump suggested that the new coronavirus would “go away” in April, as temperatures warm. While some viruses are seasonal, it’s not yet clear if the new virus will follow the same pattern — and experts caution against banking on the weather to resolve the outbreak.

The outbreak of a respiratory illness now known as coronavirus disease 2019, or COVID-19, began in Wuhan, China, at the end of 2019. According to the World Health Organization, as of Feb. 13, the virus has infected more than 46,000 people and killed at least 1,116. Some scientists and others have speculated that if the new coronavirus is similar to influenza and some other viruses, it could dissipate once temperatures rise and humidity increases. But right now, that’s an unknown, and whether the virus will decline by April may also hinge on other factors, including the degree of spread and the effectiveness of containment efforts.

“It’s possible, but it is wishful thinking, by analogy with flu and other winter respiratory viruses,” Columbia University epidemiologist Stephen Morse told us of an April timeframe. “I’d say wait until April, we’ll know then if it’s true.” In the meantime, he recommended continuing to attempt to control the virus, and not being “lulled by hopeful, but quite possibly wrong analogies.”

The president first referenced the weather potentially helping with the outbreak in an early morning tweet on Feb. 7, when he said he had just spoken on the phone with President Xi Jinping of China.

“Nothing is easy,” Trump said, but Xi “will be successful, especially as the weather starts to warm & the virus hopefully becomes weaker, and then gone.”

Several days later, in a White House meeting with state governors, he repeated the idea and was more specific on the outbreak’s timeline.

Trump, Feb. 10: Now, the virus that we’re talking about having to do — you know, a lot of people think that goes away in April with the heat — as the heat comes in. Typically, that will go away in April. We’re in great shape though. We have 12 cases — 11 cases, and many of them are in good shape now.

At the time, the Centers for Disease Control and Prevention had confirmed 12 cases in the U.S., although the agency announced an additional case in California that day. As of Feb. 13, the tally had risen to a total of 15.

Later in his remarks to the governors, Trump praised China for “doing a good job” with the outbreak, and again mentioned his call with the Chinese leader.

Trump also said similar things at his rally in New Hampshire that evening.

Trump, Feb. 10: “And by the way, the virus. … It looks like by April, you know in theory, when it gets a little warmer, it miraculously goes away — I hope that’s true. But we’re doing great in our country. China, I spoke with President Xi, and they’re working very, very hard. And I think it’s going to all work out fine. Rough stuff, I tell you, rough, rough stuff. But I think it’s going to work out good. We only have 11 cases, and they’re all getting better.

There is a scientific basis for some of Trump’s comments, as many respiratory viruses ebb in spring and summer, possibly because the warmer, wetter conditions hamper viral spread. But it’s unknown if that applies to the new coronavirus — and it wouldn’t be that the virus “miraculously goes away.”

Seasonality of Some Viruses

Numerous human viruses, including influenza and some other coronaviruses (there are several), are seasonal, typically striking in the cooler months, with cases declining as summer nears. Scientists aren’t exactly sure why this happens, but one of the prevailing theories is that it’s because of the weather.

“We know that some respiratory viruses in the air or on surfaces lose their ability to infect cells under warmer and moderately humid conditions,” Linsey Marr, a professor of civil and environmental engineering at Virginia Tech, said in an email.

Marr, who has studied viral survival under different environmental conditions, said the mechanism for this is unknown — and could involve various parts of the virus, including the viral envelope, surface proteins or genome — but there appears to be something about the colder, drier air that allows some viruses to better survive and spread. “Once the weather warms up, conditions are not as favorable for virus survival,” she said.

Several studies have found that absolute humidity in particular may be especially important in driving some of these effects. Absolute humidity, Harvard epidemiologist Marc Lipsitch explained, is essentially the amount of moisture in the air. “This is always low when it’s cold because cold air can’t hold much water or it will start to rain,” he said in an email.

Lipsitch is a co-author on a paper that found in models of seasonal flu, outbreaks in temperate regions tend to start once absolute humidity levels fall.

Beyond direct interactions between the environment and the virus, seasonality of certain viruses could also be due to social factors, such as the school calendar or indoor crowding, as well as changes in a person’s immune system.

Experiments in mice, for instance, have shown that inhalation of dry air may weaken the immune response against influenza infection. Some scientists have also suspected that in the winter, less sun exposure could lead to lower vitamin D levels, which could then potentially reduce the body’s ability to fight off a virus.

Marr said there wasn’t yet a consensus among scientists about what leads some viruses to be seasonal — and it could be a mix of factors. “It could be due to differences in virus survival in air and on surfaces and/or it could be due to seasonal changes in people’s immune function,” she said. “This is an area of active research.”

David Fisman, an epidemiologist at the University of Toronto, agreed, noting that the drivers of viral seasonality are “often hard to identify with certainty as so many environmental and behavioral factors change in tandem.”

Unknown If New Virus Is Seasonal

Whether the new virus will be seasonal — and the outbreak improved by shifting weather — is unknown.

Looking back to 2003’s outbreak of SARS, or severe acute respiratory syndrome, Lipsitch said weather “may have helped a little,” but that the outbreak subsided because of “very intensive control efforts based on quarantine of contacts and isolation of cases.” The new virus is fairly similar to the SARS virus, sharing approximately 80% of its genome, which is reflected in its new name, SARS-CoV-2.

Lipsitch added that his ongoing analyses “do seem to show a little less transmission in more summery conditions” for the new coronavirus and some other human coronaviruses responsible for common colds. But, he said, “that is not likely to be enough” to make the new virus “‘go away’ on its own.”

Morse, the Columbia epidemiologist, noted that in Canada, one SARS outbreak was controlled by mid-April, but another peaked in late May. Another coronavirus, the one responsible for Middle East respiratory syndrome, or MERS, thrives in high-temperature Gulf countries, suggesting it’s not particularly susceptible to environmental conditions. But outbreaks of both viruses were driven by health care transmissions, Morse said, which so far does not appear to be the case with the new virus.

“We don’t know if this virus will be seasonal, because we haven’t had previous experience with this virus, and SARS and MERS are not necessarily good analogies,” he said in an email. “It’s possible it will be seasonal, but it’s too early to tell, so it’s just speculation.”

While the new virus could behave similarly to flu, several epidemiologists noted that there are additional reasons not to assume that will be the case.

For one, even though flu generally subsides in temperate regions when summer rolls around, there are instances in which flu has not always obeyed its own calendar.

“A number of flu pandemics have come in late spring or summer,” Morse said, including the 2009 H1N1 pandemic flu and the 1957 flu in the U.S.

Influenza viruses, too, do not show typical seasonal patterns in tropical areas, and the new coronavirus has already landed in those parts of the world.

The new coronavirus “seems to circulate quite nicely in tropical areas,” such as Singapore, Fisman said in an email, “so it seems to me unlikely that it would stop circulating simply because of warmer weather.”

Lipsitch added that if temperature or humidity are important factors for this new virus, air conditioning could undermine some of the potential benefit hot and humid climates bring.

“An April end to the outbreak would be truly astonishing,” Lipsitch said. “I think it will just be getting under way in much of the world.”

Marr, who thinks it’s “likely” the outbreak will “die down in the spring,” nevertheless was wary of implying that the world should rely on a shift in weather to help control the virus. “Both containment efforts and a change in weather could help slow the outbreak,” she said.

Thus, while the president’s assertions are possible, and guided by some scientific thinking, they are hardly a given.

Indeed, as Nancy Messonnier, the director of the CDC’s National Center for Immunization and Respiratory Diseases, said in a Feb. 12 telebriefing, “I would caution overinterpreting” the idea that warmer weather would “weaken” the virus. Noting that the agency has had less than six weeks of experience with the outbreak, she said, “I’m happy to hope that it goes down as the weather warms up, but I think it’s premature to assume that. And we’re certainly not using that to sit back and expect it to go away.”

The post Will the New Coronavirus ‘Go Away’ in April? appeared first on FactCheck.org.

Thu Feb 13 , 2020
Attorney General William Barr said Thursday that President Donald Trump should stop tweeting about the Department of Justice, complaining that the president’s comments “make it impossible for me to do my job.” Barr’s unusual critique of his boss came in an ABC News interview. The remarks followed days of sharp […] 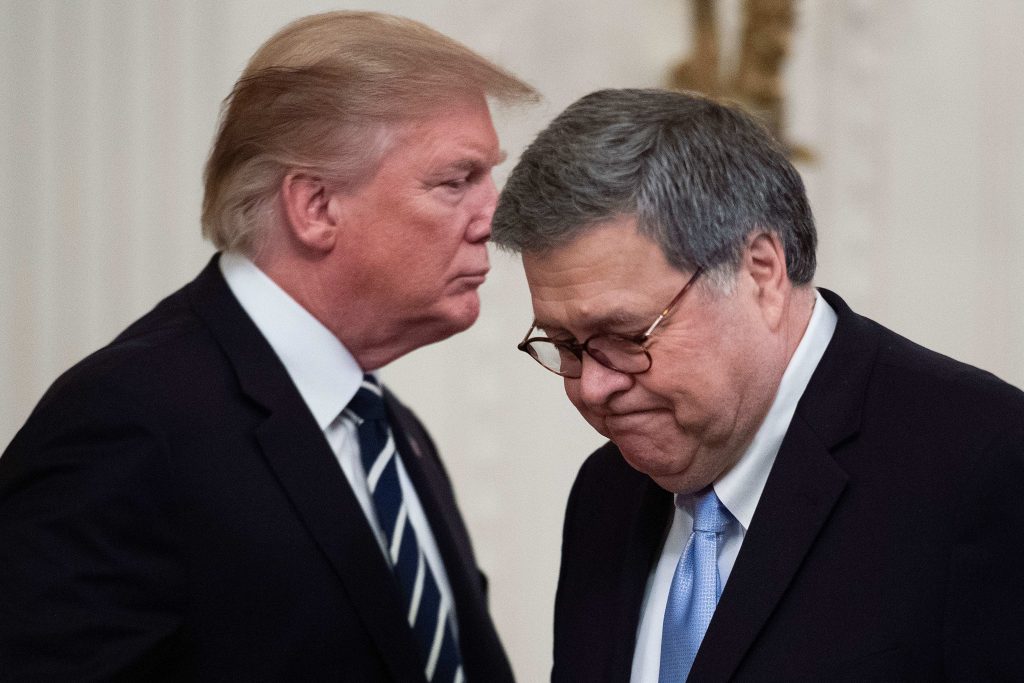