Several of the officials who’ve testified before the House Intelligence Committee in the presidential impeachment hearings this week have name-dropped the same famous rapper: A$AP Rocky.

Rocky, whose real name is Rakim Mayers, was accused with two others of beating a 19-year-old man in Stockholm on June 30. He was arrested and jailed in Sweden. President Trump sought to personally intervene in the situation, although Sweden insisted its legal process had to play out. Eventually the rapper was released and returned to the U.S.

A$AP Rocky’s legal saga came up during the impeachment hearings when State Department official David Holmes privately testified — and then said again during a public hearing Thursday — that he overheard a July 26 phone call between Ambassador Gordon Sondland and President Trump as the two discussed topics ranging from A$AP to Ukrainian President Volodomyr Zelensky.

“I could only hear Ambassador Sondland’s side of the conversation,” Holmes testified Thursday. “Ambassador Sondland told the president the rapper was ‘kinda f’ed there,’ and should have pleaded guilty. He recommended the president ‘wait until after the sentencing or it will only make it worse.’ He added that the president should ‘let him get sentenced, play the racism card, give him a ticker-tape [parade] when he comes home.'”

Holmes also said Sondland told Mr. Trump that Sweden should’ve released the rapper, “but you can tell the Kardashians that you tried,” referring to Kim Kardashian’s efforts to reform the criminal justice system, and her and husband Kanye West‘s interest in A$AP’s case.

Sondland, the U.S. ambassador to the European Union, first gave a closed-door deposition before testifying in a public hearing, and changed part of his testimony between those two dates, saying he remembered more details now thanks to listening to other testimonies and going over documents.

When the Democrats’ attorney Dan Goldman asked Sondland how and why he remembered more details and phone calls with the president now, Sondland responded, “What triggered my memory was someone’s reference to A$AP Rocky, which was I believe the primary purpose of the phone call.”

While this call was to discuss the imprisoned rapper, Sondland said in his opening statement Wednesday that the five-minute conversation also touched on more weighty topics, which he now remembers.

“I remember I was at a restaurant in Kiev, and I have no reason to doubt that this conversation included the subject of investigations,” he said. “Again, given Mr. Giuliani’s demand that President Zelensky make a public statement about investigations, I knew that investigations were important to President Trump. We did not discuss any classified information.”

Sondland said he didn’t dispute that other witnesses could have overheard this call. “It is true that the President speaks loudly at times,” he said. “And it’s also true I think we primarily discussed A$AP Rocky. It is true that the president likes to use colorful language. Anyone that has met with him at any reasonable amount of time knows this.”

The mention of A$AP Rocky at a very serious moment prompted late-night comedian Stephen Colbert to use the rapper’s music to remix Sondland’s testimony. On the “Late Show,” Colbert played a clip of Sondland speaking and interjected A$AP rapping, as the two appear to riff with each other.

“Everyone was in the loop,” Sondland says.

Tesla unveils its first electric pickup, the Cybertruck, starting at $39,900

Fri Nov 22 , 2019
Tesla’s new Cybertruck pickup. Handout Tesla CEO Elon Musk unveiled the company’s all-electric pickup, the Cybertruck, on Thursday night at one of his company’s signature promotional events in Los Angeles. The vehicle, which represents a large metallic trapezoid, will start at $39,900. The truck is Tesla’s sixth vehicle since it […] 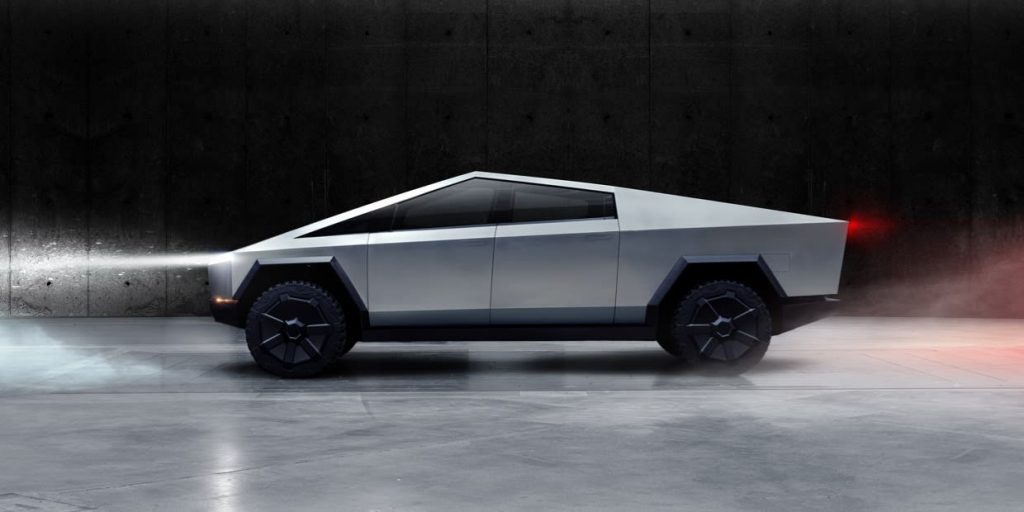