Jeffery Epstein has been put under indictment for sex trafficking and sex trafficking conspiracy but on Monday, a former FBI official has allegedly said that Epstein is a “placeholder” for prosecutors.

This is not the end of arrests and that Former Assistant FBI Director Chris Swecker expects a much larger “superseding” indictment is imminent to come.

The indictment that alleges that the billionaire, Epstein, who is a financier and registered sex offender, preyed on “dozens” of victims as young as 14 years of age. Epstein allegedly operated a “vast network” from 2002 “up to and including” at least 2005.

Epstein, aged 66, pleaded not guilty to the charges in a New York courtroom on Monday afternoon.

Chris Swecker, Assistant Director of the Federal Bureau of Investigation has said he believes the two-count indictment was brought to get Epstein “off the street” as fast as possible.

He said, “I think a decision was made that this conduct was ongoing, perhaps.”

Epstein was arrested on Saturday after his private jet, known to many as  “LOLITA EXPRESS,” landed on U.S. soil after flying back from France.

The plane earned the nickname for its large bed reported on board where passengers had group sex with young girls.

Many famous names are alleged to have been friends with Epstein and flew on his famous private jet. Former President Bill Clinton, former Secretary of State Hillary Clinton, Britain’s Prince Andrew, Mick Jagger, Courtney Love, Alec Baldwin, Peter Soros (George Soros’ nephew), Ted Kennedy, David Koch and many more. The list is rather extensive and even President Trump is alleged to have flown on the jet at least once.

The president’s legal team denies allegations that Trump was ever friends with Epstein.

According to an FBI affidavit, Epstein’s former house manager, Alfredo Rodriguez, had in his possession an address book  but despite having been subpoenaed for everything he had on his former boss, Rodriguez didn’t share it with the FBI or Palm Beach Police Department detectives investigating Epstein. He did, however, try to make a $50,000 score by covertly peddling the black book, with addresses and phone numbers in it, to one of the attorneys launching lawsuits at Epstein on behalf of his victims.

Bill Clinton took at least 26 trips flying aboard Epstein’s private jet. He  apparently ditched his Secret Service detail on some of the excursions.

NYPD and the FBI have emails that allegedly show that  Hillary Clinton traveled as Epstein’s guest to the Island at least six times.

Epstein had made a plea deal, in which he was sentenced to 13 months in jail. It was overseen by former Miami U.S. Attorney Alexander Acosta. Acosta is now Trump’s labor secretary.

The much visited Island is located on an estate on Epstein’s 72-acre Island that is called “Little St. James,” which is in the U.S. Virgin Islands.

Swecker has said that he believes the current investigation is a “redo” of a previous one that closed with Epstein receiving the “deal of the century.”

The Southern District of New York’s public corruption unit is handling the Epstein case. It is probable that they became involved because he is alleged to have provided underage women to “pretty high-profile individuals.”

Swecker said, “That would involve, by definition, public corruption if the charges were suppressed for that reason.”

The Miami Herald published a series of reports on the once sealed document. Victims in this case were not asked for permission to have their names released.

A judge, earlier this year, ruled that because the victims were not notified and permission was not granted, the judge is weighing whether to invalidate the agreement.

In my humble opinion, Epstein is a flight risk and a menace to society, especially with young underage girls. His time in jail was no more than a slap on the wrist for the billionaire who allegedly enlisted quite a number of children to please his elite group of friends and travel companions. He should face charges that fit the crime.

This is big and many are going to go down.

Mon Jul 8 , 2019
Apple CEO Tim Cook announces the new Mac Pro with a cost as high as $6,000 as he delivers the keynote address during the 2019 Apple Worldwide Developer Conference (WWDC) at the San Jose Convention Center on June 03, 2019 in San Jose, California. But the company is focused more […] 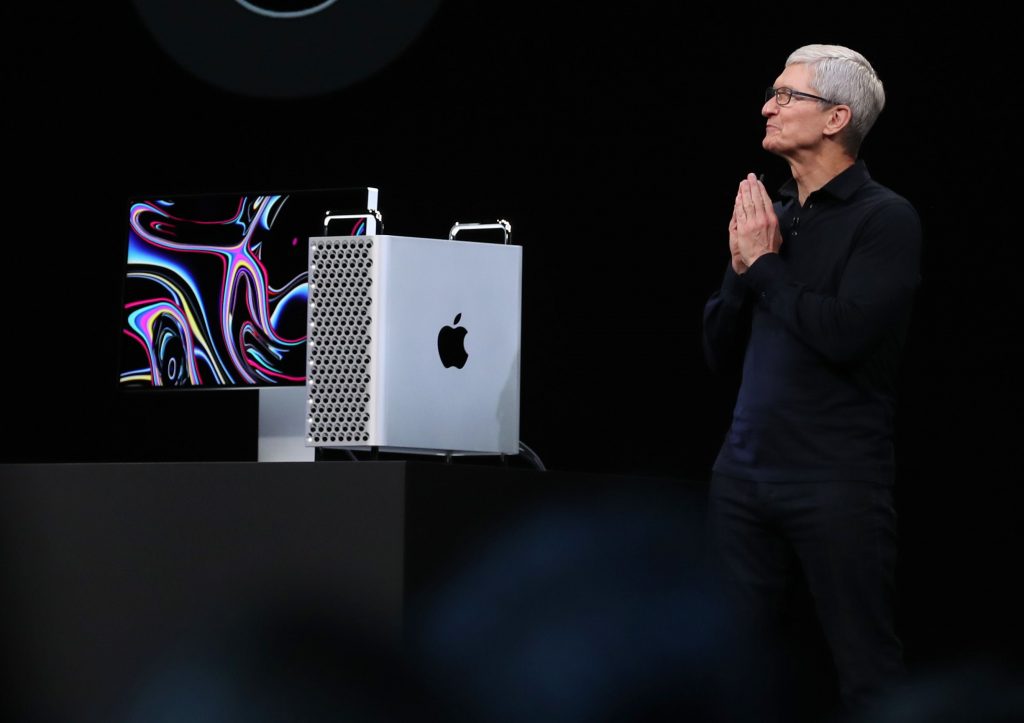