Kraft Heinz (NASDAQ: KHC) has demonstrated that it can cut costs (to the tune of nearly $2 billion) thanks to the playbook of major shareholder 3G Capital. But what about top line expansion? In this second segment on the ketchup and mustard conglomerate, we analyze its prospects for revenue growth as the company heads into 2018.

A full transcript follows the video.

10 stocks we like better than The Kraft Heinz Company
When investing geniuses David and Tom Gardner have a stock tip, it can pay to listen. After all, the newsletter they have run for over a decade, Motley Fool Stock Advisor, has tripled the market.*

David and Tom just revealed what they believe are the 10 best stocks for investors to buy right now… and The Kraft Heinz Company wasn’t one of them! That’s right — they think these 10 stocks are even better buys.

Vincent Shen: How do you think the company and management can deliver here? In this case, the 3G team obviously has to rethink their approach a little bit. They’ve cut costs now, but what about growing that top line? They’ve already implemented quite a few changes. For example, in the leadership structure, there’s been some new positions and promotions and changes in the leadership team at Kraft Heinz that were announced in the last earnings call. So it seems like they’re already starting to rethink things a little bit.

Asit Sharma: Yeah, it’s a great question that you pose, Vince, where is this revenue going to come from? Investor expectation ever since 2015 was that Kraft Heinz was going to act as 3G Capital companies typically do. So cut overhead cost and then go out and acquire revenue by other companies. In February of this year, very shortly after initial talks with Unilever for a $143 billion deal that broke down, following this, there was no other merger that looked good, either to investors or Kraft Heinz management, and that’s because of some of the headwinds on the industry that you mentioned earlier.

Consumer packaged goods companies in the food sector are having a rough time as grocery shopping changes. People start ordering their groceries online, so they’re not in the stores to see the marketing attached to these products. And smaller brands, which have a more sustainable bent, have more natural ingredients, are popping up on shelves when customers do go in. If you look at the potential candidates that Kraft Heinz could conceivably buy — let’s take Campbell Soup, for example. Campbell Soup is struggling, its revenues are declining. So that doesn’t look so great. Other candidates have similar problems. I think Mondelez is one as well that I’ve often thought could be an interesting merger, but they also struggle with revenue. So the trick for Kraft Heinz might be for this next year to go back to the drawing board. The one criticism I’ve had about 3G over the years is that there is no tool for revenue in the playbook. There’s every tool for making the operations better, but when it comes to growing the top line, 3G companies always look to acquire. That’s why, and Vince, you and I talked briefly last year on a podcast about Anheuser-Busch’s massive acquisition of SABMiller, you can’t just grow until you’ve acquired every other fish in the industry. At some point, you have to learn how to increase sales organically on your own.

For this company, I think, maybe look to Europe. That’s where they’ve had some success with packaging innovations in condiments across a more active consumer, especially in the U.K. and Western Europe. They can try this year to extend those gains and translate some of those earnings back into the U.S. Which goes back to what you were mentioning, that there are opportunities to take brands in the U.S. into Europe. Me, I would love to see them focus on the business next year. Maybe the last thing they need is to acquire a company and have this whole long process of merger and finding synergies, optimizing operations. Go back to basics would be my hope for this company in 2018.

Shen: Yeah, and everything else that goes along with the integration process. In terms of organic growth, you think about the traditional levers that a company in this industry might consider. You mentioned a few of them — additional marketing, they might innovate with new products, might try to revitalize some brands. But those are all things that require investment, spending more money, not so much the cutting costs playbook that 3G has become known for operating with.

Getting some closing comments from you, Asit, we talked about some of their challenges, their headwinds, their opportunities, things that lie ahead. But the stock trades at about 22x forward earnings right now. Shares are in negative territory year-to-date, and that’s the same as a lot of the other food and beverage companies, packaged goods that are in this industry like Unilever and Mondelez, we talked about those, Kellogg’s, General Mills. They’re all in the same boat, too. But I guess what an investor will probably ask, then, is about faith in Buffett and the 3G Capital team. Is that something that you have, with such a strong lineup of experienced investors, in terms of taking over these companies, and they’ve had a lot of success in the past, eventually being able to come through? What do you think?

Sharma: That’s one persuasive reason for an investor to hang on to this stock, that the bank of Warren Buffett is next door. In terms of acquisitions, those are always open to Kraft Heinz. It would just take a little bit of organic growth, some resumption into the low single digits. And that seems like a very small number. You’re talking about 1% to 2% organic growth. But in this industry, with all the disruption that’s going on, that would actually be a very positive sign. If they could hit that next year, it gives investors a rationale to see this combination of higher earnings per share from really good operations and their experience, plus just a little bit of growth in terms of customers wanting to buy these products and demand pulling their products more off the shelves, as Heinz enjoyed in past years before all these mergers started. I think you combine just a little bit of resumption with organic growth with what you mentioned, Vince, what better partner would you want than Warren Buffett in the future?

It’s still a good stock to hold, but for investors who think that maybe it’s going to pop back next year, I think we’re probably looking at a 2019 story. But it’s certainly not a stock that you would have to shake out of your portfolio. Just monitor it and keep an eye on it, and hopefully next year, they will resume some of the top line growth that investors have been looking for.

Sun Dec 10 , 2017
A lot’s been said about Russia meddling in our 2016 presidential campaign. But the Russians are already buzzing about their presidential election next March. Because unexpectedly Vladimir Putin has a genuine challenger: a handsome, 41-year-old lawyer, Alexei Navalny, who has chosen one of the most dangerous occupations in the world: […] 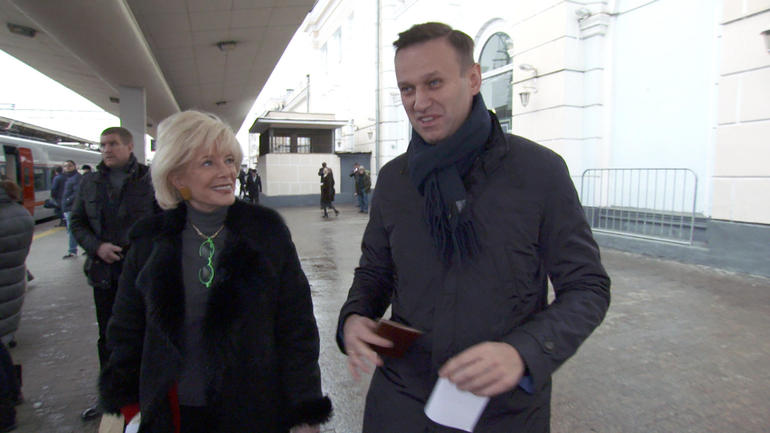