A view outside Cinemas 1, 2 & 3 movie theater during the coronavirus pandemic on May 18, 2020 in New York City. COVID-19 has spread to most countries around the world, claiming over 320,000 lives with over 4.8 million infections reported. (Photo by Noam Galai/Getty Images)

While some industries have heralded the third quarter as the beginning of a rebound from the financial devastation wraught by the coronavirus pandemic, the outlook is still dire for U.S. movie theater operators.

In recent days all of the major cinema chains released quarterly results that showed mounting losses as nearly 100% of revenue was wiped out as auditoriums sat vacant for months on end. With Covid-19 cases still rising in the U.S., states are unlikely to encourage citizens to venture out for a movie night. Meanwhile, studios are making the tough decision to release films straight to video-on-demand in the U.S. after repeatedly pushing back release dates.

“If the U.S. government would have taken this seriously when the shutdown began, and mapped out a comprehensive plan of action, we’d all be sitting in our favorite theaters right now, watching Hollywood blockbusters in their normal habitat,” Jeff Bock, senior analyst at Exhibitor Relations, said.

“Now, because of the lack of leadership, theaters across America are on the verge of bankruptcy with no real cinematic savior in sight,” he said.

As of Friday, U.S. Covid-19 cases topped more than 4.88 million with at least 160,111 deaths. The U.S. accounts for one-fourth of the total global coronavirus cases and more than one-fifth of the deaths. In the last week, the country has averaged more than 50,000 new cases per day, according to a CNBC analysis of data compiled by Johns Hopkins University.

Instead of pushing to reopen the economy, states are tightening restrictions.

When the U.S. first went into lockdown in March, shutting down nonessential businesses, there was an expectation that after a few months, the country could return to some semblance of normal. In places like France, the United Kingdom, South Korea and Germany that has become the reality.

Nearly half of the world’s cinemas are now reopened in some capacity, according to data from Gower Street Analytics, a U.K.-based company that has a partnership with Comscore. It says nearly 12,400 theaters are open, with more than 90% of those outside the U.S.

The good news for theater operators is there is an audience hungry to see new films.

AMC’s CEO Adam Aron said Thursday on an earnings conference call that attendance has been light at open cinemas because older catalog films are being shown, but enthusiasm and ticket sales have spiked when new films are released.

AMC operates around 8,200 screens in the U.S. and more than 2,900 internationally. Aron said that more than a third of its theaters in Europe and the Middle East are already open and the rest should resume operations within two weeks.

Quite simply, content drives movie-going, and in the international marketplace there are some great examples of films that have found windows of opportunity and favor with enthusiastic audiences who are drawn to theaters by these high profile new films

One of the new films doing solid business for the movie theater chain is a sequel to the popular Spanish-language film “Father There is Only One (Padre No Hay Mas Que Uno),” which debuted in Spain at the end of July. It opened to the tune of $2.52 million, or 70% of the total Spanish box office that weekend. So far, the film has tallied more than $4.4 million in sales with more than 665,000 people buying tickets to see the film.

“Box office revenues for the sequel this year were considerably higher than those of the original movie, which itself was the highest grossing domestic film in Spain in 2019,” Aron said.

“Quite simply, content drives movie-going, and in the international marketplace there are some great examples of films that have found windows of opportunity and favor with enthusiastic audiences who are drawn to theaters by these high profile new films,” Dergarabedian said.

In South Korea, a steady flow of local movies has been rapidly lifting sales at the box office. “Peninsula,” has grossed $26 million in three weeks. “Steel Rain 2” opened last week and has tallied $9 million in ticket sales. This weekend will bring “Deliver Us From Evil,” which is expected to conquer the No. 1 spot.

South Korea had the second-highest box office haul in the last week, according to Comscore, just behind China.

With so many theaters open internationally and with local titles performing so well, it’s no surprise that American studios are choosing to release their films outside of the U.S.

On Thursday, horror film “Antebellum” became the latest film to upend its release strategy. It left its August release date and set a September digital rental date, skipping theaters in the U.S. The film will be released in some international movie theaters, though.

This trend could continue as long as the U.S. is unable to safely reopen its theaters. The October release of “Wonder Woman 1984,” as well as the November releases of “Black Widow” and “Soul” are all in question. These blockbuster features would traditionally bring massive revenue to theaters and studios, but without a guarantee that folks in the U.S. would be able to safely venture out to see them, they could easily be pushed to premium on-demand or given an international release.

Prior to the pandemic, Hollywood was already thinking globally by targeting international markets like China with high-octane blockbusters in the hope of scoring bigger box office grosses. U.S. blockbusters often generate more than 60% of ticket sales outside the country.

China operates more than 10,800 theaters, currently 64% of those locations are open. In total, Chinese theaters account for nearly 40% of the total number of theaters in the world.

Last year, the country’s box office tallied $9.2 billion in ticket sales, the second-highest box office haul just behind North America, which took in $11.4 billion. Prior to the pandemic, it was expected that China would eclipse the U.S. within a few years and become the global cinema leader.

“Given the ineptness of the administration in stemming the pandemic, and the resolute idiocy of a large portion of the public, it seems to me that both interest and ability to return to theaters will be blunted well into 2021 when and if there is an effective vaccine available,” Doug Stone, president of Box Office Analyst, said.

Sat Aug 8 , 2020
President Trump is holding a press conference on Saturday afternoon, the day after promising to take executive action because of another failed week of negotiations on Capitol Hill to reach an agreement on a coronavirus relief bill. The president said in a press conference Friday evening that his administration is “talking about” […] 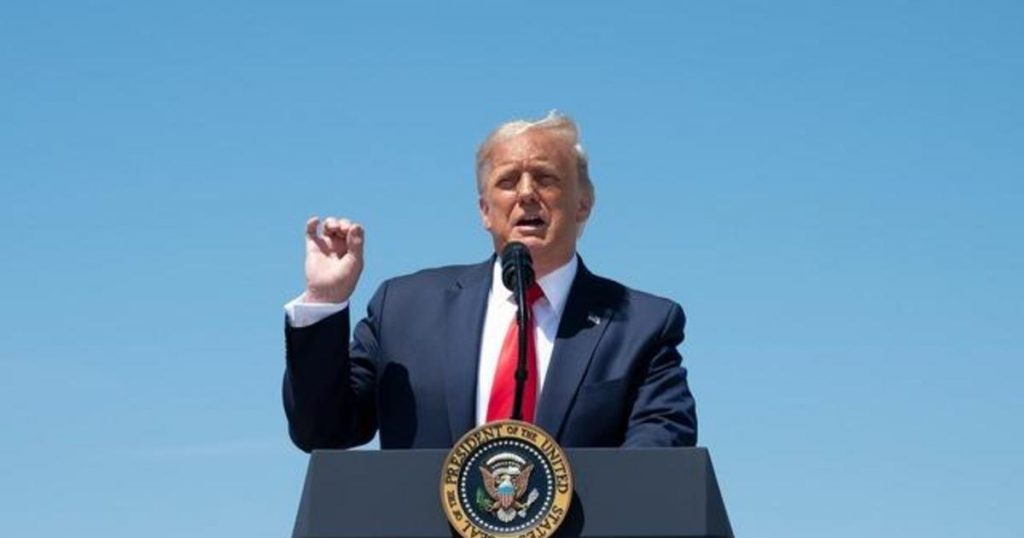