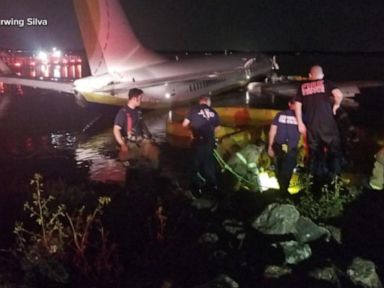 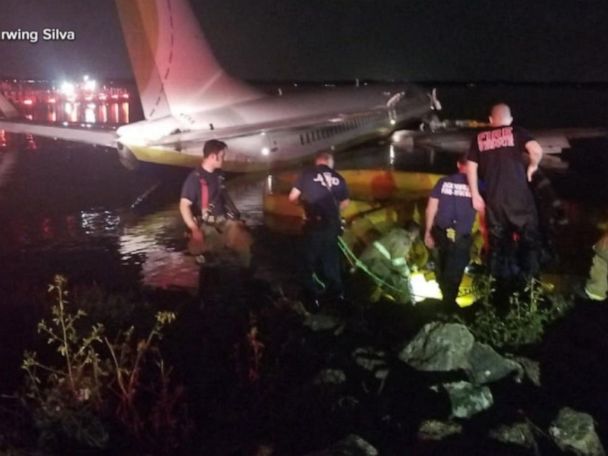 Transcript for Passengers stuck on wings of crashed plane

Authorities also investigating this weekend’s aviation accident here in the U.S. Charter plane skidded off the runway into a river in Jacksonville. ABC’s Victor Oquendo is on the scene and, Victor, what is happening with that plane right now? Reporter: Well, good morning, George. Investigators need to get to the critical cockpit voice recorder as they try to determine a cause, but the problem is, it’s located in the tail of the plane. As you take a look behind me you can see that part of the plane is still submerged. It needs to be removed. Before that they need to take out all the fuel. This morning, new images of passengers stranded on the wings of a plane in the middle of a storm. Baby coming through. Baby coming through. Reporter: The harrowing moments caught on video just after the plane carrying 143 people overran a Jacksonville runway and slid into ray river. Turbulence started. Rumbling started and then all of a sudden it was like a small thud, like a small bump and then it was just the massive, massive impact. Reporter: Those on board the Boeing 737 chartered by the department of defense carrying military and civilians from Guantanamo Bay, Cuba, to the naval air station in Jacksonville last Friday night tell us the top of the aircraft cracked on impact letting water inside. Video clearly shows the nose cone of the plane was torn off. Firefighters taking the passengers to shore, somehow everyone survived. For the most part, you know, it was another miracle. I don’t know how we survived. Reporter: 22 people were taken to hospitals but everyone will be okay. NTSB investigators on scene all weekend trying to determine a cause seen here examining the ground marks made by the landing gear. The flight data recorder quickly recovered but the critical cockpit voice recorder still in the tail of the plane submerged. Weather is also being looked at as a possible contributing factor in this near tragedy. Things could have turned out a lot worse than they did. I think god had his hand on that plane and that’s why I’m sitting here today. Reporter: And there’s no real time line on when the plane might be removed, still looking at options. Might keep it here or take it elsewhere. George. Okay, Victor, thanks very much. Let’s bring in Steve ganyard. Steve, what happened in Jacksonville. It could have been much worse. If you look at the runway lights that extend into the water and how the airplane just veered off at the last second. If it hit the lights, concrete steel could have opened up the plane and could have been a real tragedy. Which is what happened in Russia. We saw the plane bouncing on the tarmac. What does that reveal to you. Other than a botched landing, not much. They had to come back for an emergency and sounds like they lost communication but they hit almost twice and finally hit so hard it broke the airplane apart and caused the terrible fire. What about this idea the troubles might have first been caused by lightning? It’s hard to say why that would have botched the landing. For some reason they came in and hit hard the first time and the airplane bounced again and then caught on fire on the second — but if you look at the response once the fire started I’m concerned people may have lost their lives due to the slow response of the crash fire rescue people at the airport. Should not have been that long. We heard from Dan this superjet has been shunned by European and U.S. Companies. It’s a Russian design. It’s only flown in Russia. It’s got a very poor reliability record. It’s not commercially it’s an airplane to avoid. Steve ganyard, thanks very much. Always appreciate Steve’s insight, George. Now to breaking news.

Mon May 6 , 2019
Various Heinz sauces of U.S. food company Kraft Heinz are offered at a supermarket of Swiss retail group Coop in Zumikon, Switzerland December 13, 2016. REUTERS/Arnd Wiegmann May 6, 2019 (Reuters) – Kraft Heinz Co will restate financial reports for over a two-year period to fix errors that resulted from […] 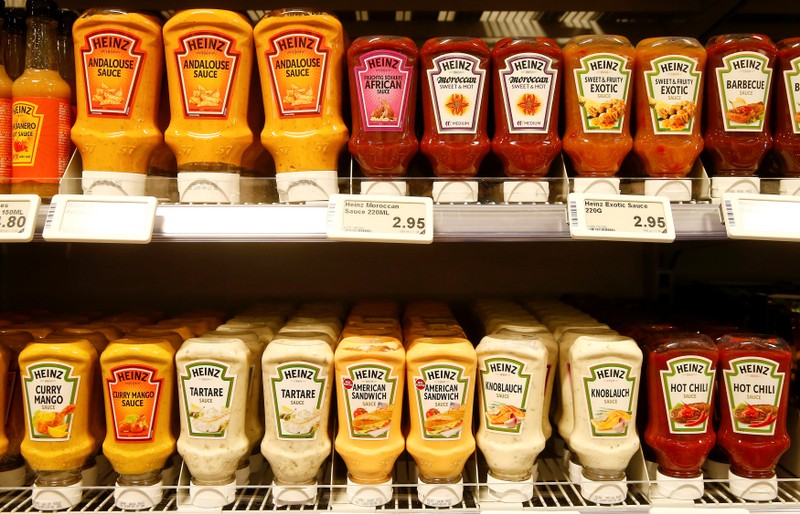