By Sruthi Shankar and Aparajita Saxena

(Reuters) – U.S. stocks rose on Wednesday as investors digested a stronger-than-expected inflation data and a surprise drop in January retail sales, which shifted the focus from rising inflation to the prospect of stagflation.

The Labor Department’s core Consumer Price Index, which excludes the volatile food and energy components, increased 0.3 percent in January, while economists polled by Reuters had forecast an increase of 0.2 percent. However, the year-on-year rise was unchanged at 1.8 percent.

The data again raised the specter of rising inflation and rekindled fears that the Federal Reserve could be forced to be more aggressive with interest rate increases.

However, data showed U.S. retail sales fell 0.3 percent last month, the biggest decline in nearly a year and in sharp contrast to economists’ estimates for a 0.2 percent increase.

U.S stock futures fell more than 1 percent after the data was released at 8:30 a.m. ET. An hour later, the stock market opened a third of a percent lower and has slowly pared losses since.

“The initial reactions were amplified. We took a big dive in equity markets and now, as we digest the numbers a little bit further, people are starting to calm down,” said Jim Smigiel, head and chief investment officer of Absolute Return Strategies at SEI Investments in Philadelphia.

“The number suggests the notion of stagflation, higher-than-expected inflation numbers and weaker-than-expected consumption which is a negative growth in the United States. That’s not the narrative that the plethora of data really supports.”

“I think the market is trying to find a bottom here. The market is not looking for any serious downleg from where we are today,” Smigiel added.

Benchmark U.S. 10-year Treasury yields <US10YT=RR> were near their session highs at 2.8894 percent, but a key measure of near-term volatility fell, in contrast to its reaction to strong U.S. jobs and wages data earlier in the month.

The CBOE Volatility index <.VIX> was down at 20.27 points, slipping below 20 for the first time since Feb. 5 and well below the 50-point mark it hit during last week’s sell-off.

The VIX slipping below 20 is “a very good sign”, said Bucky Hellwig, senior vice president at BB&T Wealth Management. “It shows the volatility is getting priced out of the market.”

Among stocks, Fossil <FOSL.O> surged more than 60 percent after the watchmaker’s strong holiday-quarter sales and a rush among short-sellers to cover their positions.

Chipotle <CMG.N> jumped about 14 percent after it hired Brian Niccol from Taco Bell as its next chief executive, which analysts said sparked hopes of a quicker turnaround.

Wed Feb 14 , 2018
Gil Perry, CEO of startup company D-ID, stands on stage during a presentation to the CyberTech 2018 conference in Tel Aviv, Israel January 31, 2018. REUTERS/Nir Elias February 14, 2018 By Rinat Harash and Ari Rabinovitch TEL AVIV (Reuters) – Big brother is watching. But in the future he may […] 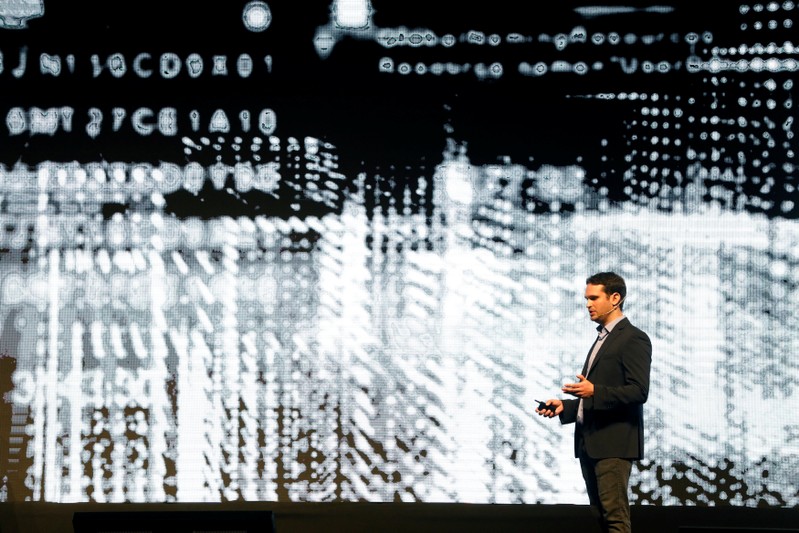