Milwaukee — Giannis Antetokounmpo had the Larry O’Brien Trophy in one arm, the NBA Finals MVP trophy in the other and there was a cigar on the table in front of him.

All the work it took to lift the Milwaukee Bucks from a team that won 15 games when he was a rookie to one with 16 wins this postseason was finally finished.

“This is time to celebrate,” Antetokounmpo said.

Milwaukee waited 50 years for that.

Antetokounmpo’s performance capped one of the greatest NBA Finals ever for any player. He had 50 points, 14 rebounds and five blocked shots as the Bucks beat the Phoenix Suns 105-98 Tuesday night to win an entertaining series 4-2 and cap off a joyous return to a fan-filled postseason after last year’s NBA bubble.

It was the third game this series with at least 40 points and 10 rebounds for Antetokounmpo, a dominant debut finals performance that takes its place among some of the game’s best. He finished with 35.2 points, 13.2 rebounds and 5.0 assists per game while shooting 61.8%, the first player in finals history to reach those numbers.

“It’s not hyperbole to say that Giannis Antetokounmpo put together one of the best single-game performances ever in NBA Finals history in Game 6,” wrote CBSSports.com’s Michael Kaskey-Blomain.

He shot 16 for 25 from the field and made an unbelievable 17-of-19 free throws – a spectacular showing for any shooter, let alone one who was hitting just 55.6% in the postseason and was ridiculed for it at times.

“People told me I can’t make free throws and I made them tonight. And I’m a freaking champion,” Antetokounmpo said.

The Bucks tweeted out some of that interview:

He hopped around the court waving his arms with 20 seconds remaining to encourage fans to cheer, but there was no need. Their voices had been booming inside and outside for hours by then, having waited 50 years to celebrate a winner after Lew Alcindor – before becoming Kareem Abdul-Jabbar – and Oscar Robertson led the Bucks to their first championship in 1971.

“For the city, I’m sure it means everything,” said Khris Middleton, the other player left from that 15-67 team in 2013-14. “They’ve seen the work that we put in over the years for them to get to this point.”

In a season played largely without fans, the Bucks had 65,000 of them packed into the Deer District outside, a wild party that figured to last deep into the Midwestern night.

CBS Milwaukee affiliate WDJT-TV’s cameras took it all in – from the wild cheering to fireworks:

But the celebration was marred early Wednesday when gunfire rang out, WDJT reports. People began running from the area. Police said one person was injured and found at the scene and a second victim arrived at an area hospital with a gunshot wound. Police caught a suspect on scene due to fighting in the area that believed to be related.

In the arena, confetti rained down inside as fans chanted “Bucks in 6! Bucks in 6!” – a hopeful boast by former player that turned out to be a prophetic rallying cry.

“I hope they enjoyed it just like we are now,” Middleton added.

The Bucks became the fifth team to win the NBA Finals after trailing 2-0 and the first to do it by winning the next four games since Miami against Dallas in 2006.

The teams that came into the NBA together as expansion clubs in 1968 delivered a fine finals, with the last three games all in the balance deep into the fourth quarter.

The Bucks won them largely because of Antetokounmpo, a two-time MVP in the regular season who raised his game even higher in the finals and was voted the unanimous NBA Finals MVP.

He was the star of these finals in every way, from his powerful play on the court to his humble thoughts in interviews to taking time after Tuesday night’s win to find children to high-five amid the celebrations. He teared up afterward talking about the sacrifices his family endured while he grew up in Greece.

He did all this after missing the final two games of the Eastern Conference finals with a hyperextended left knee, an injury he feared could be serious enough to end his season.

Just think what people would have missed.

Antetokounmpo sat for a memorable interview with “60 Minutes” in 2018. The broadcast tweeted about it before what turned out to be the series’ final game:

Wed Jul 21 , 2021
Beijing — At least 16 people have died after torrential rains caused landslides and flooded a city in central China, with shocking images showing passengers struggling against chest-high water inside a train carriage. As river embankments were breached in record downpours across Henan province, President Xi Jinping described the situation as […] 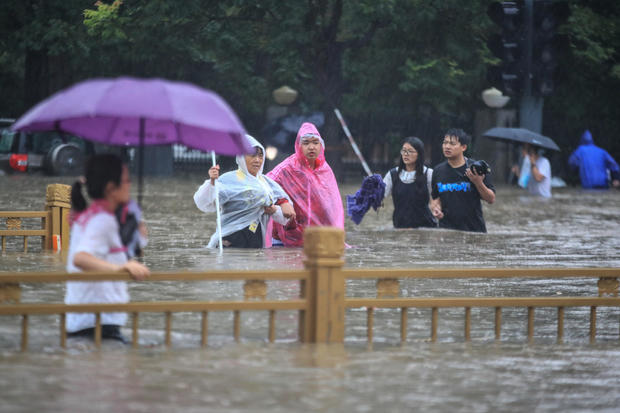