A video spread widely on social media falsely purports to show a man burning 80 ballots cast for President Donald Trump. The ballots shown in the video are sample ballots from Virginia Beach, Virginia — as evidenced by the absence of the bar code found on actual ballots — city officials said.

A viral video that was debunked by local officials in Virginia on Election Day is continuing to proliferate on social media, falsely purporting to show a man burning a pile of ballots cast for President Donald Trump.

The ballots seen in the video are, in fact, sample ballots — which are forms meant to help voters prepare for the election, not actual ballots used to cast votes.

But in the video, a man deceivingly suggests they are actual ballots with votes for Trump.

“You gotta do what you gotta do,” he says as he displays the papers and puts them into a plastic bag, adding: “F— Trump.”

“Got around 80,” he says before lighting the bag on fire.

On Instagram, a Nov. 4 post of the video was captioned: “THESE MFs ARE BURNING TRUMP BALLOTS! This is happening across the country in various ways. Don’t ever try and tell me that this election wasn’t rigged and that ‘voter fraud is a myth.’”

That post alone was viewed nearly 500,000 times in less than 24 hours. The video racked up thousands of views in other posts, too.

It was also shared the same day by one of the president’s sons, Eric Trump, on Twitter, who wrote: “Burning 80 Trump Ballots.” The account whose post he retweeted has since been suspended.

Though the person who filmed the video never says where the ballots originated, at one point the right side of the ballots can be seen showing candidates for “Member City Council At Large”: Rosemary A. Wilson, Brandon C. Hutchins and Nadine Marie Paniccia.

Those were candidates for city council in Virginia Beach, Virginia.

The city released a statement on Election Day about the video, noting that the ballots seen in the video do not have the bar code that outlines the perimeter of actual ballots.

“A concerned citizen shared a video with us that ostensibly shows someone burning ballots,” the city said. “They are NOT official ballots, they are sample ballots.”

Officials published a file showing a still image of the ballots in the video next to an image of what the actual ballots look like to illustrate its point.

While the ballots in the video were sample copies, the city said “[f]ire investigators are looking into the illegal burning.”

The city also responded on Twitter to Eric Trump’s amplification of the claim, writing: “Those were sample ballots. Addressed this yesterday.” 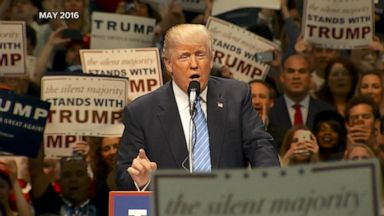