Venezuelan opposition leader Juan Guaido, who many nations have recognised as the country’s rightful interim ruler, greets supporters as he leaves after a rally in support of the Venezuelan National Assembly and against the government of Venezuela’s President Nicolas Maduro in Caracas, Venezuela, May 11, 2019. REUTERS/Ivan Alvarado

Security forces had earlier prevented lawmakers from entering the legislature for Tuesday’s session, saying they were investigating the possible presence of an explosive device inside the building.

The Supreme Court in a statement posted on its Facebook page accused lawmakers Carlos Paparoni, Miguel Pizarro, Franco Casella and Winston Flores of treason and inciting rebellion. The accusations marked the latest step in a crackdown by President Nicolas Maduro on allies of opposition leader Juan Guaido following a failed effort to spur a military uprising in April.

“This simply gives us more strength,” Flores told Reuters, calling the Supreme Court’s accusations “illegitimate orders from the dictator.” “We know they will continue with this process of trying to destroy the National Assembly.”

Last week, one opposition lawmaker was arrested and several took refuge in foreign embassies in Caracas or fled the country after similar accusations from the court.

Flores said he would make an “emergency” trip to Uruguay to denounce the wave of accusations against Venezuelan lawmakers to the parliament of the Mercosur trade bloc, where he is also a representative, in Montevideo.

In a tweet, Pizarro called the court ruling “an illegal sentence that seeks only to generate fear to shut us up.”

Reuters was unable to obtain comment from the other legislators.

Opposition leaders in recent weeks have called such charges an effort by the ruling Socialist Party to shutter the legislature. The Trump administration strongly condemned this month’s detention of Edgar Zambrano, the vice president of the legislature.

Guaido, leader of the opposition-controlled Assembly, in January invoked Venezuela’s constitution to assume an interim presidency, arguing Maduro’s 2018 re-election was illegitimate. More than 50 countries have recognized him as the country’s rightful leader, and say the assembly is its last remaining democratic institution.

“This is a dictatorship that goes after dissidents, and we are fighting for a political change,” lawmaker Juan Pablo Guanipa told Reuters, referring to the blocking of congress.

Tuesday’s session was scheduled for 10 a.m. (1400 GMT), but never began. The lawmakers were set to discuss the charges against their colleagues and the arrest of Zambrano, an outspoken critic of Maduro.

Venezuela’s information ministry, which handles media inquiries on behalf of the government, did not respond to a request for comment on why security forces blocked the entrance to parliament. Maduro, a socialist, calls Guaido a puppet of the United States seeking to oust him in a coup.

The government stripped the assembly of most of its powers after the opposition won a majority in 2015 elections. Lawmakers loyal to Maduro generally do not attend the sessions, but go to meetings of the Constituent Assembly, a legislative body created in 2017 that meets in the same building.

The Constituent Assembly is controlled by the ruling Socialist Party and its powers supersede those of the National Assembly.

Opposition lawmaker Jorge Millan told reporters the report of “bombs” in the building was false.

“It is a trick to prevent the parliament from functioning today,” he said. “If we do not have a session today, we will do it tomorrow.”

U.S. growth would have contracted without trillions in government, consumer debt: Gundlach

Tue May 14 , 2019
FILE PHOTO: Jeffrey Gundlach, CEO of DoubleLine Capital LP, presents during the 2019 Sohn Investment Conference in New York City, U.S., May 6, 2019. REUTERS/Brendan McDermid/File Photo May 14, 2019 By Jennifer Ablan (Reuters) – U.S. growth appears to be based “exclusively” on government, corporate and mortgage debt and the economy […] 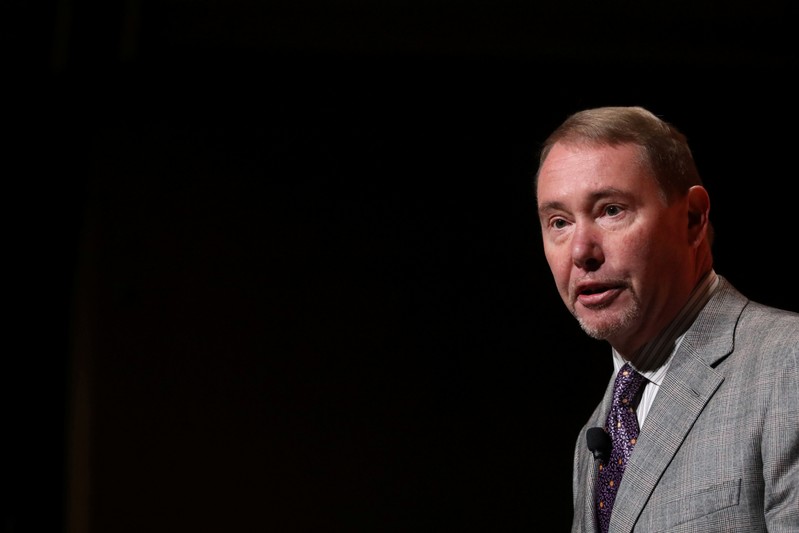