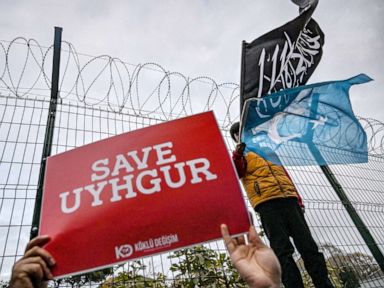 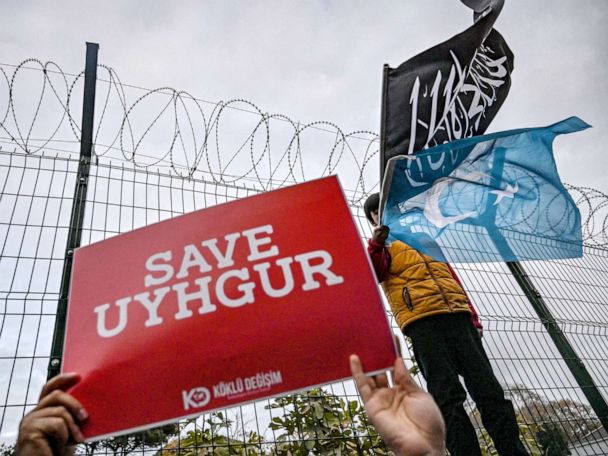 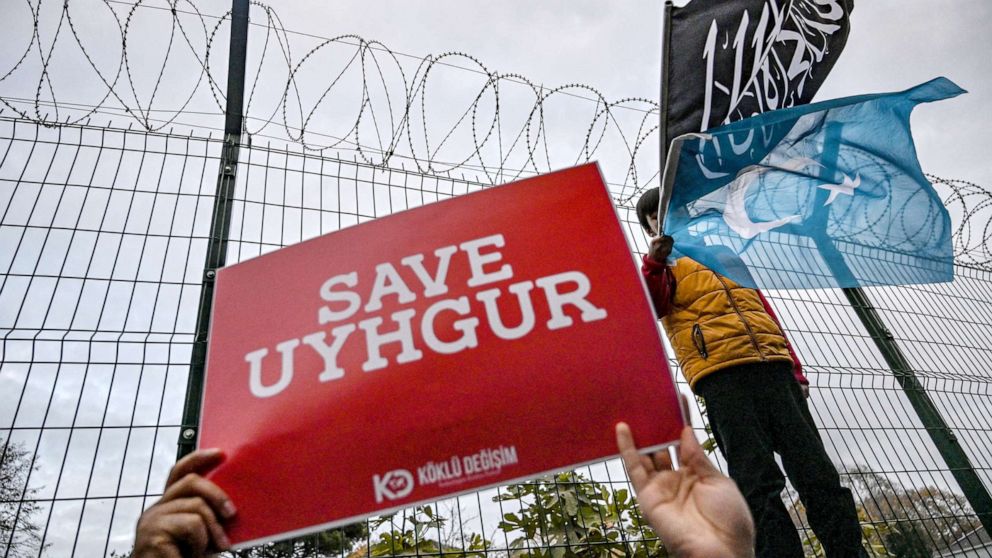 China‘s message to the international community is that its Xinjiang province is a “wonderful land.” But for many who are part of its Turkic Muslim population, the majority of those who live there, it’s a nightmare.

Up to 3 million Turkic Muslims — both Uighur and Kazakh — are, or have been, detained in facilities the Chinese government calls “vocational centers,” according to the U.S. State Department. Human rights activists allege that the Chinese government forces the ethnic minorities to work on farms and in textile factories nearby. The country has denied allegations of slave labor or that these are forced internment camps.

“There are actually factories that are effectively attached to the political education camps, and so, part of the ‘vocational’ training to which people are subjected involves working in these factories, most of which are textile factories,” Sophie Richardson, the China director at Human Rights Watch, told ABC News’ Bob Woodruff.

The outcry over their alleged torture and mistreatment — by people whose family members were held there or who themselves stayed there — has caught the attention of the U.S. government and companies that do business overseas.

The Chinese government has not denied that these facilities exist, but says they’re part of “anti-terrorism and de-radicalization efforts in Xinjiang in accordance with the law to protect people’s lives.” Experts have said China has used this as an excuse to target the province’s Turkic Muslim population after a rise in violence throughout the region over the last 20 years, led by a radicalized group of Uighurs.

A growing number of countries have accused China of committing cultural genocide — attempting to erase the Muslim faith from Uighurs and Kazakhs in the region. In recent weeks, China has also been accused of destroying or restricting access to mosques inside Xinjiang, which it denies.

In 2019, then-Secretary of State Mike Pompeo referred to the “vocational centers” as internment camps and said those detained were “being treated in ways that are fundamentally inconsistent with what China would have you believe.” President Joe Biden’s administration has agreed with this view, and just this week, U.S. representatives, led by House Leader Nancy Pelosi, called for world leaders to institute a “diplomatic boycott” of the 2022 Beijing Winter Olympics.

“We cannot proceed as if nothing is wrong about the Olympics going to China,” she said during a congressional hearing.

Gulzira Auelkhan, a Kazakh woman born and raised in Xinjiang, said she was held in one of the internment camps and that days after her release, she was forced to work in a textile factory.

“I wanted to go back home, but they said then, ‘We’ll send you back to re-education center,'” she told ABC News’ Bob Woodruff.

She was able to send a message to her husband in Kazakhstan, including a picture of herself outside of the factory.

“The next day, they picked me and interviewed me at the factory and got me to the car. … They showed our conversation with my husband from [the] computer. … They said, ‘You illegally revealed the factory to Kazakhstan,'” she said.

She said that because she did not remain silent, the Chinese government tortured her, sticking needles into her fingernails and beating her with a stick.

“I thought I have died that day. I felt my soul has passed,” she said.

Auelkhan said she was eventually able to escape to Kazakhstan before leaving for the U.S. The Chinese government has denied her allegations and claims she left China to avoid paying back a loan. It even created a short documentary — released on April 11 — attempting to prove it.

ABC News was unable to contact any of the people featured in the Chinese production.

On that same day, Chinese officials released another video. Kuzzat Altay, who first spoke to ABC News in 2019, a year after he says his father was taken to an internment facility in Xinjiang, said his father was in the video “publicly denouncing me on TV.”

Altay said he’s convinced his father and the other people in the video were forced to participate.

“He started slowly contacting me through WeChat. He said, ‘They’re asking you to stop. Can you stop what you’re doing?'” Altay said. “I said, ‘I can’t. I’m sorry. I cannot stop.’ … And I started asking what happened to him in those concentration camps.”

Altay hasn’t heard from his father since then. While he waits — hopeful that his father will reach out someday — he has continued to advocate for those in Xinjiang.

Meanwhile, in the U.S., amid growing calls for justice from these alleged victims of the Chinese government, apparel companies, among others, have found themselves stuck between the ethical obligation to take action and the need to continue producing goods to meet their bottom lines.

In China, 85% of its manufactured cotton comes from the Xinjiang region, according to John Leonard, U.S. Customs and Border Protection’s acting executive assistant commissioner.

“It’s really a moment of reckoning in that they find themselves … under enormous pressure increasingly from not just advocates like Human Rights Watch, but from consumers, not to use cotton or other products that may have been made by forced labor,” Richardson said. “But they’re under enormous pressure from Chinese authorities not to talk about those issues publicly.”

In January, CBP stepped in, enacting a policy in which cotton products shipped from Xinjiang are held until the importer can prove that the product was not made by forced labor.

Soon after the policy went into effect, CBP Port Director Ed Fox showed ABC News how a cargo container might be stripped out and examined at Port Newark in New Jersey. He said that one container could contain thousands of cartons of apparel and that over the course of a fiscal year, up to a half-million could be shipped from Xinjiang.

Of the clothes, Fox said they “would have gone to some sort of a discount store” and that the “consumer would have gone in and bought it, never knowing that the new shirt that they were putting on their back was the result of slave labor over in China.”

He said that the sender of these goods has 90 days to claim them and cooperate with the CBP investigation or else they will be sent back or destroyed.

“This order only went into effect two weeks ago,” he said. “I’ve already got eight [containers] and five more coming in this week.”

Even today, no one has claimed responsibility for the goods that were sent in that container or attempted to prove that they were not made with forced labor.

The Chinese government has steadfastly called the allegations of forced labor an “outrageous lie.”

“So-called genocide, forced labor, systematic rape and torture in Xinjiang are lies of the century, which never happens,” Chinese diplomat Guo Jiakun said at a U.N. meeting last week. “It will never happen in China. I could tell more truths but you don’t give me more time because you reject the truth.”

The Chinese Embassy in the U.S. ignored ABC News’ request for an interview, instead sending a link to a statement it had published online in February, which included lengthy denials of the allegations being leveled at them, including denying there is any forced labor, noting, some Uighurs were part of the “cotton-picking forces.”

“They worked together, cared for each other and forged a deep friendship,” the statement said. “These cotton pickers in and out of Xinjiang were all voluntary.”

Fri May 21 , 2021
Business mogul Barry Diller on Friday ripped into Apple over the fees it charges companies that have applications on the iPhone maker’s App Store. In an interview on CNBC’s “Squawk Box,” the chairman of IAC and Expedia said his companies, and others like them, are “overcharged in a disgusting manner.” For large companies, Apple […] 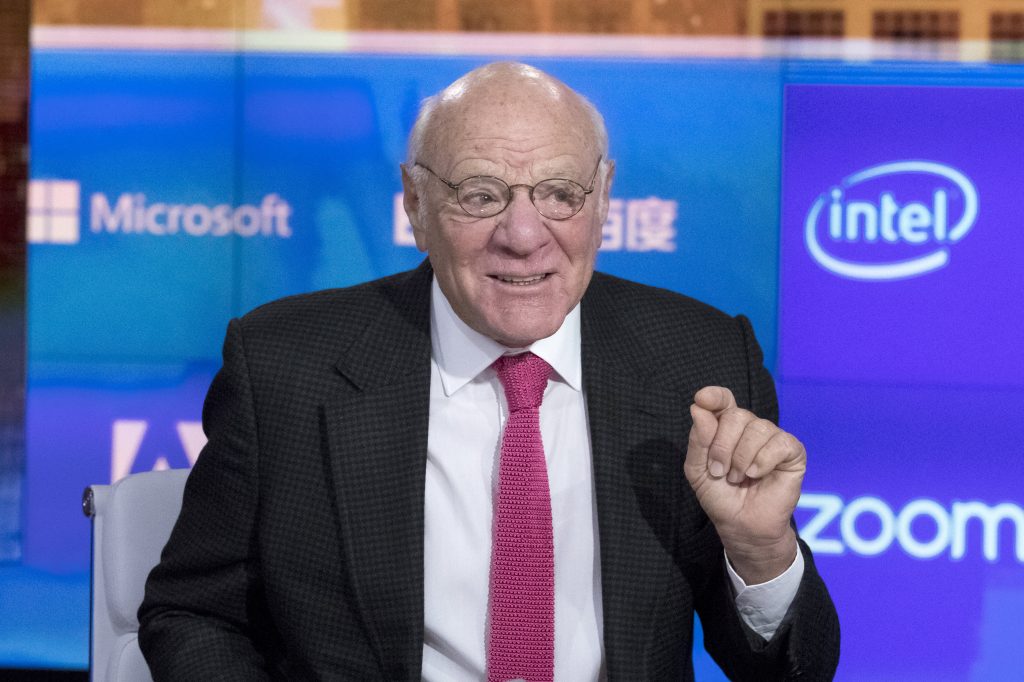