LONDON (Reuters) – British manufacturers urgently need clarity on whether the country will clinch a Brexit transition period to smooth its departure from the European Union, the head of a body representing the industry will say on Tuesday.

With Prime Minister Theresa May hoping to secure an approximately two-year transition deal from her EU peers next month, Judith Hackett, chair of the EEF group, said many companies were confused about what Brexit would mean for them.

“Secretary of state, I cannot stress enough the urgency with which we need clarity on any transition deal,” she said in excerpts of a speech she is due to make to attendees of an EEF conference including business minister Greg Clark.

On the permanent deal that Britain will also try to negotiate this year for its future trading relationship with the bloc, Hackett said: “We must avoid new trade barriers, complex customs arrangements, or vastly different regulatory environments.”

She urged the government to recognize the risks of clamping down too hard on EU workers coming to Britain, despite concerns among many voters about migration which were a big factor behind the 2016 referendum decision to leave the EU.

“Government must lead on making the public case that while industry recognizes broader public concerns over immigration, companies still need access to the skills at all levels which EU workers currently provide and which cannot be backfilled easily in the short or medium term,” Hackett said.

On domestic policy, Hackett slammed the government’s apprenticeship levy which it introduced in 2017 as a way to fund training for workers.

“Whilst the levy has laudable aims, its impact on employers has been disastrous,” she said. “It is complex, companies are unable to access their funds, and many view it as another tax on business. As a result, we have seen new starts collapse, with many companies postponing or halting apprenticeships.”

Tue Feb 20 , 2018
February 20, 2018 LONDON (Reuters) – Britain’s financial sector will be “the servant of industry not the masters of us all” if the opposition Labour Party gets into power, its leader Jeremy Corbyn will say on Tuesday, accusing bankers of taking the economy hostage. Corbyn, a socialist who has won […] 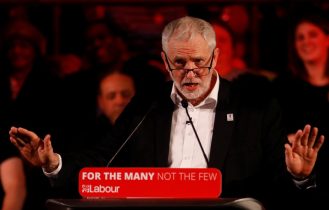