By Svea Herbst-Bayliss and Tim McLaughlin

BOSTON (Reuters) – Some of the biggest public pensions funds in the United States have invested in one of the world’s largest purveyors of video surveillance systems that the U.S. government claims are used in wide-scale repression of the Muslim population of western China.

The Trump administration’s decision to put the company, Hangzhou Hikvision Digital Technology Co <002415.SZ>, on a blacklist last week has prompted at least two of the pension plans to say they are reviewing or monitoring that development.

The blacklist applies to Hikvision and seven other companies because they allegedly enabled the crackdown that has led to mass arbitrary detentions in the Xinjiang region.

“We are tracking the situation given this new development with the Department of Commerce’s announcement,” a spokeswoman for the California State Teachers’ Retirement System (CalSTRS) said in an email.

CalSTRS owned 4.35 million Hikvision shares at the end of June 30, 2018, the last data available. The holding, owned directly and through emerging market exchange-traded funds, would be worth $24 million at that share count.

“Our holdings are primarily held according to their weights in passive portfolios matching the MSCI ACWI ex-U.S. index, our policy benchmark. We are monitoring the situation,” said a spokesman for the teachers’ fund. The ex-U.S. All Country World Index includes stocks from 22 developed and emerging markets.

The blacklisting means Hikvision and the other companies will not be able to buy U.S. technology, such as software and microchips, without specific U.S. government approval. It does not prevent U.S. investors from buying the companies’ shares.

In August, Hikvision had been banned from selling to U.S. federal agencies because the government said its products could allow access to sensitive systems.

Hikvision’s General Manager Hu Yangzhong told Reuters on Wednesday it has been talking to the U.S. government about Xinjiang and has hired human rights lawyers to defend itself against the blacklisting.

A spokeswoman for law firm Sidley Austin LLP, which has lobbied for Hikvision this year, declined to comment.

Another major fund investing in Hikvision shares is the Florida Retirement System (FRS), with 1.8 million shares at the end of June.

A spokesman for the fund said it was working closely with external money managers “related to the issue in order to meet all regulatory and fiduciary requirements.”

Risk consultants say the ease with which money used for the retirements of tens of millions of Americans is being invested in such companies should concern U.S. authorities at every level, as well as Americans generally.

“Hikvision has emerged as the corporate poster child for enabling Chinese human rights abuses, with its surveillance cameras visible atop the walls of detention camps incarcerating some one million or more Uighurs in Xinjiang,” said Roger Robinson, president and CEO of Washington DC-based risk consultancy RWR Advisory Group.

Beijing denies any mistreatment of people at the camps, which it says provide vocational training to help stamp out religious extremism and teach new work skills.

Robinson said that many Americans are unwittingly owning shares in such companies because they are in index funds. “They are picked up by the index providers in sizable numbers and sluiced into U.S. investor portfolios with seemingly very little, if any, due diligence or disclosure in the categories of national security and human rights.”

One other company among the blacklisted eight that is owned by some of the big pension funds is iFlytek Co Ltd <002230.SZ>, a speech-recognition firm. Its shares were owned by funds in Florida, New York State as well as CalSTRS and the California Public Employees Retirement System (CalPERS) indirectly through the iShares MSCI Emerging Markets ETF at their last disclosure dates. IShares, a top ETF provider owned by BlackRock Inc <BLK.N>, declined to comment.

Not all the funds have stuck with Hikvision.

The New York State Common Fund, one of the country’s biggest pension funds, liquidated its position months ago. It had owned 2.7 million shares worth $14.2 million at the end of March through an external fund manager, but sold them in May, a spokesman said, declining to say why.

U.S. mutual funds have also cut or eliminated positions in Hikvision amid the negative publicity, which included it being named in a Human Rights Watch report on mass surveillance in Xinjiang in May.

Just 9% of global emerging markets funds now own Hikvision, down from 20% in 2018, according to Copley Fund Research. One fund to pull out is the $2.7 billion Artisan Developing World Fund <APDYX.O>, which had a $66 million position in Hikvision at the end of March but reported holding no shares three months later, fund disclosures show. Artisan did not respond to a request for comment.

At least one U.S. pension fund had worried this summer about whether to invest in the Chinese surveillance company.

The $33 billion Alaska Permanent Fund had considered an investment in a China fund featuring Hikvision as a top holding, according to minutes of a June meeting of its trustees and staff. The minutes were published last month.

Some Alaska trustees, however, worried about “headline risks” of investing in companies that aid the Chinese government’s surveillance activities, according to the minutes.

Jack Lee, portfolio manager of the China fund, assured Alaska pension officials he had spoken with Hikvision executives. Hikvision will “try to avoid that kind of business,” the trustees were told, but “they don’t necessarily know how their equipment is used,” Lee told the trustees, according to the minutes.

Reuters could not determine whether Alaska made an investment in the Schroders fund that included Hikvision stock.

A spokeswoman for the Alaska Retirement Management Board, which oversees the pension, said it does not have any additional information to share regarding Schroders’ efforts. A Schroders spokesman declined to comment.

Tue Oct 15 , 2019
Tour de France director Christian Prudhomme speaks during a news conference to unveil the itinerary of the 2020 Tour de France cycling race in Paris, France, October 15, 2019. The world’s greatest cycling event, which will start from Nice on June 27 and will finish at the Champs Elysees in […] 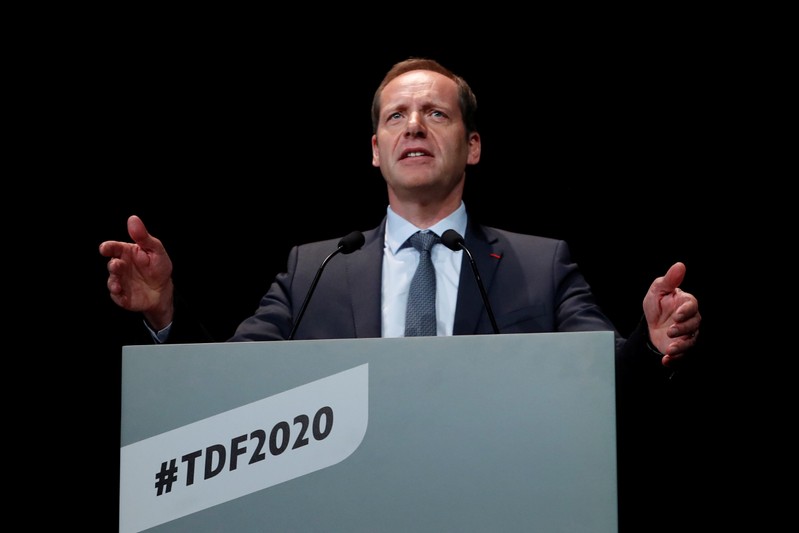