A man walks his dog past a mural depicting factory workers in the historic Pullman neighborhood in Chicago November 20, 2014. REUTERS/Andrew Nelles/File Photo

WASHINGTON, (Reuters) – New orders for U.S.-made goods fell less than expected in October and shipments of core capital goods were much stronger than previously reported, pointing to sustained strength in the manufacturing sector.

Factory goods orders dipped 0.1 percent amid a drop in demand for both civilian and defense aircraft, the Commerce Department said on Monday. September data was revised to show orders increasing 1.7 percent instead of the previously reported 1.4 percent rise.

Business spending on equipment has increased strongly this year as corporations anticipated hefty tax cuts from the Trump administration. Republicans in the U.S. Congress have approved a broad package of tax cuts, including slashing the corporate income tax rate to 20 percent from 35 percent.

Business spending on equipment increased at its fastest pace in three years in the third quarter. That is helping to underpin manufacturing, which makes up about 12 percent of the U.S. economy. Manufacturing is also being supported by a weakening dollar, which has lost about 7 percent of its value against the currencies of the United States’ main trading partners.

Factory activity is also being boosted by businesses replenishing depleted inventories and strengthening global demand, helping to offset a slowdown in spending on mining exploration, wells and shafts.

Motor vehicle orders increased 1.3 percent after being unchanged in September.

Dan Brown on God and artificial intelligence in new thriller

Mon Dec 4 , 2017
Dan Brown’s best-selling series of Robert Langdon mysteries, including the blockbuster “The Da Vinci Code,” have sold more than 200 million copes around the world. His latest thriller, “Origin” (Doubleday), features the return of the symbologist Langdon searching for answers to two fundamental questions of human existence: Where did we […] 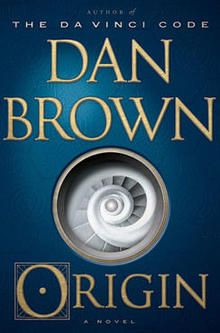