By Daren Butler and Nevzat Devranoglu

ISTANBUL/ANKARA (Reuters) – The Turkish lira weakened more than 1% against the dollar on Monday, after briefly tumbling to 6.47 overnight in what market watchers described as a “flash crash” as Japanese investors cut risk assets over Sino-U.S. trade war worries.

The China-U.S. trade war, which intensified in recent days, “means that EM FX will continue to weaken for the foreseeable future. In the absence of a thawing in trade frictions it remains a market to be structurally short EM and buy dollars on any dip,” currency analysts at Societe Generale said in a note.

On Friday, U.S. President Donald Trump announced an additional duty on some $550 billion of targeted Chinese goods, hours after China unveiled retaliatory tariffs on $75 billion worth of U.S. goods.

The latest friction, which sunk Asian shares Monday, has shaken confidence in the world economy and sent investors steaming to the safe harbors of sovereign bonds and gold, hitting emerging markets (EMs) like Turkey.

The brief plunge in thin overnight yen/lira trading was reminiscent of another “flash crash” on Jan. 3, when Turkey’s currency weakened to a similar level due to a global market sell-off and flight from risk triggered by concerns about slowing economic growth.

“Looks like another flash crash out of Asia,” Timothy Ash, head of emerging market research at Blue Bay Asset Management, wrote on Twitter.

“(It) comes amid a new found weakening trend, driven by fallout from Argentina, concerns about global volatility and nervousness over Turkish monetary policy mix,” he said.

After having gained in recent months, the lira has been newly pressured by concerns over possibly rapid loan growth after a central bank decision to lower required reserves limits and boost returns for lenders with more than 10% loan growth.

The Turkish government has been looking to boost economic activity after the economy sank into recession last year.

The currency has also been hit after Ankara said last week that an air strike on a Turkish military convoy in northwest Syria killed three civilians, fuelling worries about Turkey’s military presence in the region.

The yuan’s fall to a historic low level amid the U.S.-China trade war triggered investors’ flight from risk, said a treasury desk trader at one bank, adding that this appeared to have led to stop-loss yen/lira trades.

The trader added the lira’s brief overnight spike had been exaggerated by the low volumes at that hour.

“While the yuan level has removed a large portion of the risk, the Sino-U.S. trade war is a factor which is strengthening every day and could trigger a global flight from risk in the period ahead,” he said.

(Writing by Daren Butler; Editing by Uttaresh.V and Jonathan Spicer)

Mon Aug 26 , 2019
A trader reacts at his desk in front of the DAX board at the Frankfurt stock exchange, Germany, August 24, 2015. REUTERS/Ralph Orlowski August 26, 2019 (Reuters) – Technology stocks led a tumble in European equities in early deals on Monday as investors fled from riskier assets after another exchange […] 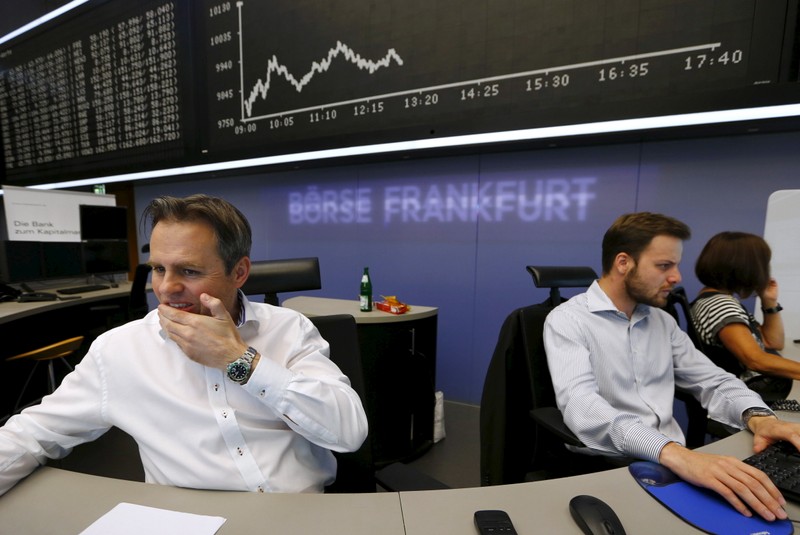