A person holds a vial of the Pfizer-BioNTech Covid-19 vaccine at the University Of Louisville Hospital in Louisville, Kentucky, U.S., on Monday, Dec. 14, 2020.

U.S. states are anxiously awaiting billions in federal aid to fund their vaccine distribution plans, currently held up in Washington and under veto threat by President Donald Trump.

After weeks of silence on the legislation, the outgoing president shocked Washington on Tuesday night by calling the bill a “disgrace” and pushing lawmakers to increase $600 direct payments to $2,000. The package also includes more than $8 billion to fund state vaccine distribution programs, which is now on pause as House Democrats scramble to meet Trump’s demand.

“We’re concerned because this is money we needed in the spring. It’s now the end of December,” said Adriane Casalotti, the top lobbyist at the National Association of County and City Health Officials.

Now that the initial doses of Covid-19 vaccine from Pfizer and Moderna are making their way to the arms of the first few millions of Americans, public health experts are concerned about how they’ll pay for the historic vaccination campaign. Time is of the essence — the U.S. wants to provide doses to all 331 million Americans by the summer.

Trump’s attack is holding up $8.75 billion in desperately needed funding that states thought they were getting to help pay for vaccine distribution, Dr. Marcus Plescia, chief medical officer at the Association of State and Territorial Health Officials, said in a phone interview.

“It’s one of those things where we started celebrating too soon,” he said, adding that his organization has been pushing for vaccine distribution funding for months.

Congressional approval of the funding “came a little late in the game, but I think it’ll be fine. It’ll get to where it needs to get in time,” he said. “If this gets delayed further it’s going to be a problem.”

Vaccine distribution efforts will require additional personnel for vaccination clinics, adequate resources to safely store doses at ultra-low temperatures, needles and other critical supplies and enhanced communication efforts to persuade people of the drugs’ safety, among other costs, experts say. To fund their pandemic responses, the nation’s states and counties have already had to cut spending and suspend capital infrastructure projects to help balance their budgets, experts said.

“We have two vaccines that are authorized for use that are out in the field, and yet we still have no money for distribution,” Casalotti said. “Every minute of delay impacts how many people can get the vaccine and when, so we urge the president to sign the bill as quickly as possible.”

So far, the immunization effort has been slow going. Roughly 9.5 million doses have been distributed and just over 1 million people in the U.S. have received their first dose of a coronavirus vaccine as of Wednesday morning, according to the Centers for Disease Control and Prevention. That’s roughly 19 million doses shy of earlier projections for December and leaves public officials a little more than a week — about 8 days — to try to close that gap.

“Exactly how fast the ramp up of immunizations, shots in arms, is slower than we thought it would be,” President Donald Trump’s coronavirus vaccine czar, Dr. Moncef Slaoui, told reporters during a press briefing Wednesday afternoon. “And as I told you earlier, we’re here to help the states to accelerate appropriately,” he said, adding the goal of 20 million vaccinations is “unlikely to be met.”

The vaccines have arrived at a pivotal point in the nation’s response to the pandemic. New coronavirus cases in the U.S. have climbed to a weekly average of 212,142 cases every day, and the virus is now killing more than 2,669 people daily on average, according to a CNBC analysis of data compiled by Johns Hopkins University.

The U.S. Department of Health and Human Services announced last week that the Centers for Disease Control and Prevention will provide an additional $227 million to 64 states and jurisdictions for vaccine preparedness and response efforts, bringing the federal government’s total contribution to nearly $430 million so far. But the states say they need billions of dollars, not millions, to distribute the shots.

While every dollar helps, the money from HHS is “a drop in the bucket” compared with what will be necessary to fund the comprehensive vaccination plans set forth by the states, Casalotti said. For months, state and local health departments have been calling on Congress to provide $8.4 billion in additional funds to carry out their vaccine distribution plans, which were completed and submitted to the CDC in October.

The Trump administration proposed $6 billion in funding for states, but Congress agreed with the states and set aside $8.75 billion for state vaccine plans in the most recent coronavirus relief package. Even then, additional funding may be needed next year for widespread inoculations, Casalotti said.

“We’re really considering this as a hopeful sign but a down payment,” Casalotti said. A spokesperson for HHS didn’t respond to CNBC’s request for comment.

U.S. officials said Operation Warp Speed, the federal government’s vaccination program, will pick up some of the costs. The U.S. is covering the costs of delivering the doses and will also provide kits with ancillary supplies to administer the vaccinations, including needles, syringes, diluent and other supplies.

Some supplies, however, won’t come from the federal government, including hand sanitizer and gloves. Other expenses, such as tents or personnel to arrange drive-thru vaccine clinics, will need to be covered by the states, said Claire Hannan, the executive director of Association of Immunization Managers, or AIM, which represents state health officials leading the vaccination planning.

“The staffing is really critical, because in order to roll this out for all Americans in a short time frame — in six months or so — to get everyone that wants to be vaccinated, you really need all hands on deck,” Hannan said.

States also need money to enroll more providers to offer the shots, but that process is taking longer than anticipated because some health departments don’t have the staff to respond to their questions and verify their credentials, she said.

“I think it’s more of a concern for the broader scale, but we could see delays in phase one as well if there’s a need for public health to be vaccinating and they’re not able to hire vaccinators,” Hannan said.

The bill for vaccination programs could grow larger as time passes and more people grow more hesitant of the vaccine’s safety, requiring greater outreach to those communities, said Casalotti of the county and city health official group. If the reliance on the Pfizer vaccine becomes greater than on others, there will also be additional costs associated with storing the doses at ultra-cold temperatures.

“All of this work would have been hard enough in advance by itself to try and scale up the largest mass vaccination campaign that we’ve ever attempted,” Casalotti said. “You’re doing all of this now in a truncated time frame with very little resources while you’re also fighting a pandemic.”

The funding that has been distributed by HHS so far has gone directly to 64 jurisdictions, which includes the 50 states, territories and a few of the nation’s largest cities. When it comes to most counties, how much funding they receive depends on whether the money trickles down to them, which doesn’t always happen, said Blaire Bryant, a lobbyist specializing in health-care issues at the National Association of Counties.

“That is a major problem for us because none of our county health departments are really seeing those funds,” Bryant said.

States, counties and local governments alike have already had to make cuts to other programs to accommodate revenue losses from their Covid-19 response, said Teryn Zmuda, the chief economist at the counties group. An August report from the group indicated that the nation’s counties will see a $30 billion hole in unbudgeted Covid-19 response expenses by the end of the 2021 fiscal year.

“We’re seeing many cuts to capital expenditure projects, economic development and investment infrastructure repair,” Zmuda said. “So these projects that may be considered less essential or secondary to public health are seeing cuts to help accommodate for what’s ahead.”

Thu Dec 24 , 2020
Britain and the European Union have struck a provisional free-trade agreement that should avert New Year chaos for cross-border traders and bring a measure of certainty for businesses after years of Brexit turmoil. With just over a week until the U.K.’s final split from the EU, the U.K. government said […] 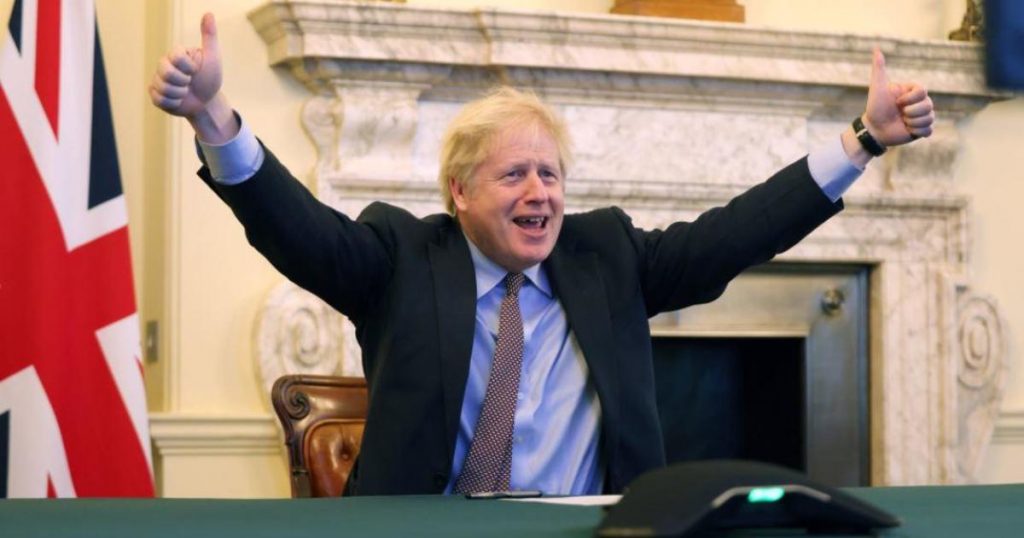