By David Morgan and Richard Cowan

WASHINGTON (Reuters) – Republicans showed no signs of being persuaded to remove President Donald Trump from office on Friday as Democrats prepared to argue he improperly interfered in their probe of his Ukraine dealings.

In their third and final day of opening arguments, Democratic lawmakers serving as prosecutors will seek to build support within the Republican-controlled Senate and the U.S. public at large for Trump’s removal.

In their articles of impeachment, the Democratic-led House of Representatives last month accused Trump of abusing power by pressuring Ukraine’s government to dig up dirt on former Vice President Joe Biden, a contender for the 2020 Democratic presidential nomination, and then obstructing a congressional probe into the scandal.

Senator Rick Scott told reporters the House managers prosecuting the case in the Senate had “done a poor job,” while his Republican colleague Senator Rick Braun said Democrats were trying to build a circumstantial case that was a “tough sell.”

Democrats spent Thursday meticulously outlining their charges that Trump, a Republican, only grew interested in corruption in Ukraine when it appeared that Biden could become a serious political threat. Trump is seeking a second term in a Nov. 3 election.

Republican Senator Lindsey Graham on Friday described those arguments as repetitive and “mindnumbing after a while.”

In a July 25 phone call, Trump pressed Ukrainian President Volodymyr Zelenskiy to investigate Biden and his son Hunter, who served on the board of Ukrainian energy company Burisma. Trump temporarily withheld $391 million in U.S. military aid to Ukraine, which Democrats say was leverage for his demands.

Trump denies any wrongdoing, while his Republican allies have argued his conduct does not rise to the level of an impeachable offense. The U.S. Constitution sets out the impeachment process for removing a president who commits “high crimes and misdemeanors.”

The president is expected to be acquitted in the Senate, where a two-thirds vote is required to convict and remove a president from office. No Republican senator has voiced any support for his ouster.

Once Democrats conclude their opening arguments, Trump’s legal team will have up to 24 hours over three days to mount a defense.

Trump on Friday retweeted dozens of supporters who echoed his criticism of the proceedings as unfair and politically motivated. Trump, a former reality television personality, also complained his lawyers would have to begin arguments on Saturday when, he said, nobody watches television.

“Looks like my lawyers will be forced to start on Saturday, which is called Death Valley in T.V.,” Trump wrote on Twitter.

Democrats have focused their attention on a small group of Republican moderates they believe might support their efforts to bolster their case against Trump with the inclusion of new witness testimony and additional evidence.

“This is a heavy moment. And you don’t know how this sense of constitutional and historical responsibility weighs on the shoulders,” Senator Chuck Schumer, the top Democrat in the chamber, said at a news conference.

On Friday, Democrats will argue that Trump, in addition to abusing power, unlawfully refused to cooperate with the House probe of the matter by directing officials to ignore Democratic requests to testify and for relevant documents.

Democrats sought to have Bolton testify in the trial, but senators voted along party lines on Tuesday against all Democrats’ proposed witnesses.

Fri Jan 24 , 2020
President Donald Trump, who last year froze hundreds of millions of dollars in security aid for Ukraine, claimed “they got all” of it “long before schedule.” That’s false. The freeze that Trump directed lasted about two months last summer and not all of the money was later disbursed on time. […] 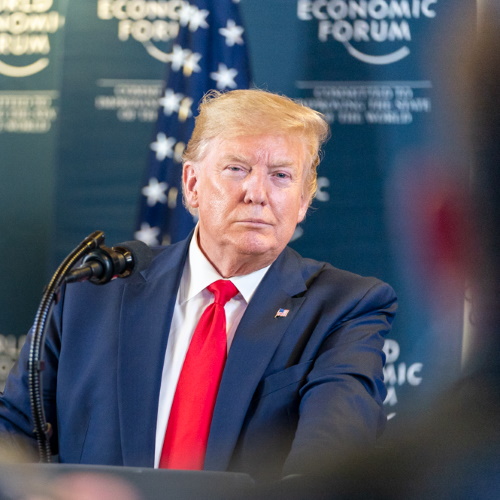