Michael Cohen, the former personal lawyer and fixer for President Donald Trump, has agreed to testify before the House Oversight and Government Reform Committee in February — a month before beginning to serve a three-year prison sentence for a range of crimes which include ones related to Trump.

Cohen’s planned Feb. 7 appearance in an open session of the committee is voluntary.

He said it will give him the opportunity “to give a full and credible acount of the events that have transpired.”

The hearing will come two-and-a-half months months after he pleaded guilty to lying to Congress in 2017 about details of an aborted Trump real-estate project in Moscow, Russia.

Shortly after the Oversight Committee’s chairman Rep. Elijah Cummings, D-Md., announced Cohen would testify, the House Intelligence Committee Chairman, Rep. Adam Schiff, D-Calif., said that “it will be necessary, however, for Mr. Cohen to answer questions pertaining to the Russia investigation, and we hope to schedule a closed session before our committee in the near future.”

Last week, the House of Representatives and its committees came under the control of the new Democratic majority, which has vowed to use its power to investigate a range of controversies involving the Republican Trump and his administration.

Cohen’s decision to testify at the Oversight Committee is the latest example of his radical transformation from a hardcore Trump loyalist who once said he would be willing to take “a bullet” for the president, to a harsh critic and signficant legal threat to the Trump.

Cohen, 52, had worked as Trump’s lawyer for years when the president was a real-estate developer in New York and star of “The Apprentice” reality television show.

His association with Trump began unraveling last April after FBI agents raided his office and residences in Manhattan, seizing evidence that led to his guilty pleas to a raft of federal crimes months later.

Cohen, in his full statement released Thursday by his attorney Lanny Davis, said, “In furtherance of my commitment to cooperate and provide the American people with answers, I have accepted the invitation by Chairman Elijah Cummings to appear publicly on February 7th before the Committee on Oversight and Government Reform.”

“I look forward to having the privilege of being afforded a platform with which to give a full and credible account of the events which have transpired,” Cohen said.

Cummings said, “I thank Michael Cohen for agreeing to testify before the Oversight Committee voluntarily.”

“I want to make clear that we have no interest in inappropriately interfering with any ongoing criminal investigations, and to that end, we are in the process of consulting with Special Counsel [Robert] Mueller’s office,” Cummings said. “The Committee will announce additional information in the coming weeks.”

Cummings noted that earlier this week, he sent sent letters to the White House and the Trump Organization renewing his of four months ago for documents related to “Trump’s apparent failure to report debts and payments to Mr. Cohen to silence women alleging extramarital affairs with the President before the election.”

Cummings last month said he wanted Cohen to testify, predicting that if Cohen did so it would be a “watershed moment” akin to the 1973 testimony by White House counsel John Dean at Watergate hearings that ended up leading to the resignation of President Richard Nixon.

Cohen since last August — even before pleading guilty to criminal charges — has met with investigators from Mueller’s office.

The former FBI Director Mueller is investigating possible collusion by Trump’s campaign with Russians who interfered in the 2016 presidential election, and possible obstruction of justice by the president. Trump denies any wrongoing by himself or his campaign. Mueller has said that Cohen gave the special counsel’s team “information about attempted by other Russian nationals to reach” Trump’s presidential campaign as far back as November 2015.

Cohen also has met with other authorities investigating the president, the Trump Organization and the Trump Foundation charity.

When he was sentenced last month, an emotional Cohen said his “own weakness and a blind loyalty to” Trump had “led me to choose a path of darkness over light.”

“Time and again I felt it was my duty to cover up his dirty deeds,” Cohen said in federal court in Manhattan, where he was ordered to begin serving his 36-month prison stint on March 6.

He remains free on bail until then.

In November, Cohen additionally pleaded guilty to a charge brought by Mueller of lying to Congress in written statements about an unsuccesful effort to build a Trump Tower in Moscow.

Cohen had falsely claimed that the Moscow project died in early 2016, when in fact the effort was continuing until at least June 2016 — when Trump was on the cusp of locking up the Republican nomination for president.

Trump’s current lawyer, Rudy Giuliani, has said the effort may have actually continued until November 2016 — the month of the presidential election.

Trump in late November claimed that Cohen was “lying” about him in an effort to “get a reduced sentence.”

“He’s a a weak person and not a very smart person,” Trump said his former attorney.

Earlier this week, criminal defense lawyers for Trump’s former campaign chief Paul Manafort accidentially disclosed in a court document that Mueller has claimed Manafort lied to the special counsel’s office about having shared campaign polling data with an accused Russian spy in 2016.

At the time that sharing occured, Russia allegedly was engaged in a wide-ranging effort, which included the use of bogus social media accounts, to bolster Trump’s candidacy.

Manafort also had met with that spy in Madrid, and discussed a possible peace plan for Ukraine with him, according to Manafort’s lawyers.

The alleged spy, Konstatin Kilimnik, had worked for Manafort for years.

Manafort pleaded guilty last year to crimes related to his work for a pro-Russia political party in Ukraine, a country that in 2014 had seen its Crimea region annexed by Russia.

His plea deal in that case required him to cooperate with Mueller’s ongoing inquiry, and to not lie.

Manafort is being held in jail without bail awaiting sentencing.

Dog gets dragged by woman on electric scooter 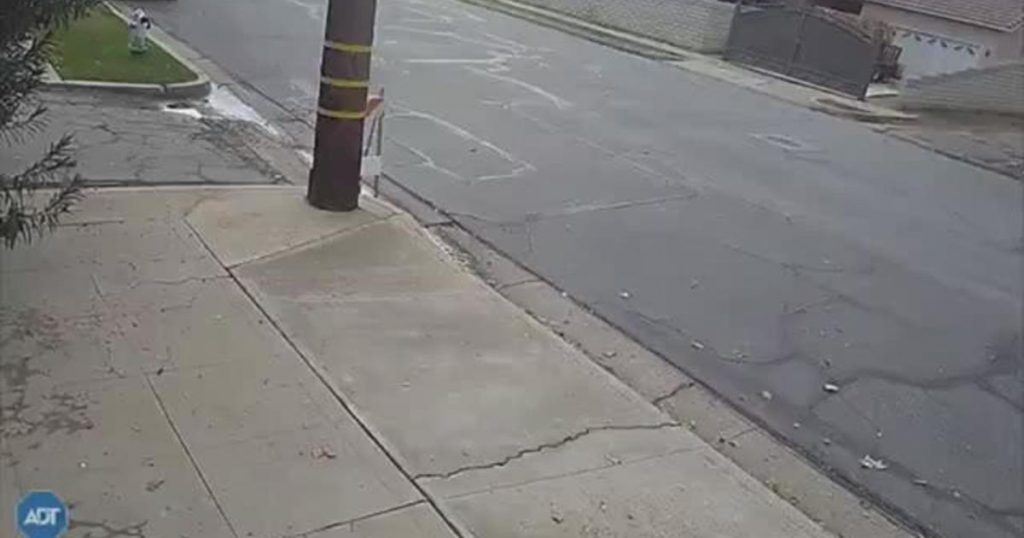