President Donald Trump listens during a White House videoconference with members of military on Nov. 26, 2020.

WASHINGTON – President Donald Trump on Wednesday vetoed the sweeping defense bill that authorizes a topline of $740 billion in spending and outlines Pentagon policy.

“Unfortunately, the Act fails to include critical national security measures, includes provisions that fail to respect our veterans and our military’s history, and contradicts efforts by my administration to put America first in our national security and foreign policy actions,” Trump wrote in a lengthy statement to Congress.

“It is a ‘gift’ to China and Russia,” the president added, without citing specific details.

Earlier this month, the National Defense Authorization Act passed both houses of Congress by veto-proof margins, meaning that any veto by Trump would likely be overridden.

Congress must now vote again to override Trump. The House is slated to return from the holidays on Monday, and Senate Majority Leader Mitch McConnell has said his chamber would vote on overriding the veto Tuesday.

“Donald Trump just vetoed a pay raise for our troops so he can defend dead Confederate traitors,” Democratic leader Sen. Chuck Schumer wrote on Twitter, highlighting one of Trump’s issues with the must-pass defense bill.

“Democrats will vote to override it,” Schumer added.

“Disturbingly, Trump is using his final hours in office to sow chaos, including by denying our servicemembers a long-overdue pay raise and hazard duty pay; our families paid family leave, child care, housing and health protections; and our veterans the benefits that they need and deserve,” House Speaker Nancy Pelosi wrote in a statement.

“Next week, December 28, the House will take up the veto override with bipartisan support,” she wrote.

U.S. Marines and Sailors with the 22nd Marine Expeditionary Unit stand at attention during a formation aboard the amphibious assault ship USS Bataan.

“The Kremlin is actively attacking our cyber networks. Instead of standing up for our national security, the President is downplaying Russia’s involvement – which contradicts U.S. intelligence – and now he just vetoed legislation that contains actionable items that we can use to hold Putin accountable for this kind of belligerent behavior,” Sen. Jeanne Shaheen, D-N.H., a senior member of the Senate Armed Services Committee, wrote in a statement.

“This isn’t about politics, this is about the security of the United States and the safety of our men and women in uniform,” Shaheen added.

Senator Richard Blumenthal, D-CT., wrote in a statement that he was speechless after Trump’s decision to withhold signature on the NDAA.

“Literally right after what could be the most massive cyberattack in our nation’s history, the President is eliminating the new tools and authorities we need for our nation’s cyber defense,” Blumenthal, a member of the Senate Armed Services Committee, wrote.

“I call on Republican colleagues not only to speak out, but stand up and look forward to a strong, bipartisan override vote,” he added.

Trump ally Sen. Lindsey Graham, R-S.C., wrote on Twitter that he would not vote to override the president’s veto. Graham did not vote for the bill in the first place.

Graham, who chairs the Senate judiciary committee, introduced legislation earlier this month that would end Section 230 protections by January 1, 2023.

Trump has offered a variety of reasons for opposing the mammoth defense bill.

Earlier this month, he threatened a veto if lawmakers did not include a measure to eliminate Section 230 of the Communications Decency Act, which protects tech giants like Facebook and Twitter from being held legally liable for what is posted on their platforms.

Trump has repeatedly accused Twitter, his social media platform of choice, of unfairly censoring him.

In his message to Congress, Trump wrote that the NDAA failed ” to make any meaningful changes to Section 230 of the Communications Decency Act.” He called on Congress to repeal the measure.

The president has previously said the measure posed a serious threat to U.S. national security as well as election integrity but did not give any further explanatory details. Trump has also asserted that the bill favors China.

The president’s issue with Section 230 came to light this summer after Twitter added warning labels to several of his tweets that alleged mail-in voting is fraudulent. Trump has still not conceded the election to President-elect Joe Biden.

The NDAA, in its current form, does not include any measure related to Section 230.

Lawmakers on both sides of the aisle have pushed back on Trump’s 11th-hour demand saying that the repeal of Section 230 was irrelevant to the passage of the Pentagon’s top bill.

“[Section] 230 has nothing to do with the military,” Senate Armed Services Committee Chairman James Inhofe, R-Okla., told reporters earlier this month. “I agree with his sentiments, we ought to do away with 230 — but you can’t do it in this bill,” added Inhofe, a Trump ally.

Similarly, Senate Majority Whip John Thune, R-S.D., said earlier this month, “I don’t think the defense bill is the place to litigate” the Section 230 fight, according to The Hill.

Trump has also insisted that the defense-spending bill include language preventing the renaming of military bases commemorating Confederate-era figures.

The Republican-led Senate Armed Services Committee over the summer approved a provision from Sen. Elizabeth Warren, D-Mass., requiring the Pentagon to rename military assets named after symbols of the Confederacy, the group of states that seceded from the U.S. and fought the Union in the Civil War.

Trump, in a multi-tweet post in June, rejected that idea, by contending that the Confederate names of the bases have become part of the nation’s great “heritage.”

“It has been suggested that we should rename as many as 10 of our Legendary Military Bases, such as Fort Bragg in North Carolina, Fort Hood in Texas, Fort Benning in Georgia, etc. These Monumental and very Powerful Bases have become part of a Great American Heritage, and a history of Winning, Victory, and Freedom,” Trump wrote on Twitter.

“The United States of America trained and deployed our HEROES on these Hallowed Grounds, and won two World Wars. Therefore, my Administration will not even consider the renaming of these Magnificent and Fabled Military Installations,” the president wrote. 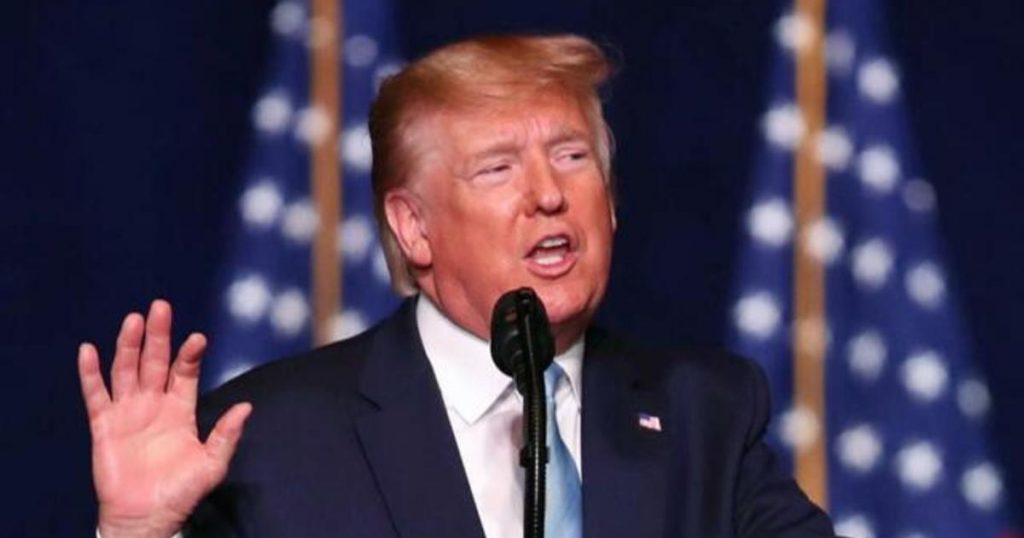