In a tweet, President Donald Trump on Nov. 12 pushed the baseless theory that voting systems deleted millions of votes for him and switched thousands of votes cast for him to his Democratic rival, President-elect Joe Biden.

No evidence has been produced to support that assertion.

Hours after Trump’s tweet, a group of federal, state and local officials overseeing the nation’s voting system said that in the recent election, “There is no evidence that any voting system deleted or lost votes, changed votes, or was in any way compromised.” The joint statement, by the Elections Infrastructure Government Coordinating Council and the Election Infrastructure Sector Coordinating Executive Committees, described the recent voting as “the most secure in American history.” The statement was distributed by the federal government’s Cybersecurity and Infrastructure Security Agency, which is part of the Department of Homeland Security.

A firm whose research was mentioned in similar allegations to Trump’s told us it has “no evidence” of irregularities with votes and hadn’t produced any research on the subject.

And voting machine experts told us what the president was suggesting could not have been detected in the time that has elapsed since the election on Nov. 3.

Trump’s claim can be traced back to an anonymous post on a pro-Trump message board.

Trump did not link to or cite a specific report. But at the end of his tweet he listed OANN, the conservative television news outlet that is a favorite of the president. And OANN recently ran a segment with similar allegations.

In the segment, reporter Lilia Fifield claims there was rampant vote theft linked to the Denver-based company Dominion Voting Systems.

OANN, Nov. 12: Election systems across the country are found to have deleted millions of votes cast for President Trump. According to an unaudited analysis of data obtained from Edison Research, states using Dominion Voting Systems may have switched as many as 435,000 votes from President Trump to Joe Biden. And the author also finds another 2.7 million Trump votes appear to have been deleted by Dominion, including almost 1 million Trump votes in Pennsylvania alone.

While the report makes explosive charges, it provides no evidence. The segment is only 48 seconds long. It is not clear what the data is, who analyzed the data and who the “author” is.

We asked OANN to support its claim but never heard back.

The numbers mentioned by Trump seem to come from the conservative website Gateway Pundit, which cites an anonymous person’s post, claiming to have done this analysis, on a pro-Trump site called thedonald.win. Gateway Pundit, which has a history of spreading misinformation, wrote “we have not verified the results so we currently are labeling his results ‘unaudited.’”

The anonymous author claimed the data came from Edison Research.

Trump has long warned, without evidence, about potential widespread voting fraud. Despite the fact that major media outlets have declared Biden the winner, the president has refused to concede.

While these claims cite analysis of data from Edison Research, the company said it had “no evidence” of irregularities with votes and hadn’t produced any research on the subject. Based in New Jersey, Edison Research is a consumer research firm that handles the vote count on election night for the National Election Pool, which includes ABC News, CBS News, NBC News and CNN.

Dominion Voting Systems’ equipment had nothing to do with any vote switching, Kay Stimson, its vice president for governmental affairs, told us in an email.

Stimson, Nov. 12: Dominion Voting Systems categorically denies any claims about any vote switching or alleged software issues with our voting systems. Our systems continue to reliably and accurately count ballots, and state and local election authorities have publicly confirmed the integrity of the process.

Two voting experts told us they knew of no evidence for the claims about vote stealing.

“I am aware of no credible evidence of any kind that voting technology from Dominion Voting Systems is responsible for tabulation errors or mischief on the scale the president alleged,” Edward Perez, global director of technology development & open standards for the OSET Institute, told us in a telephone interview. OSET is a nonprofit that focuses on voting technology research and development.

Is such grand theft possible? “It’s highly unlikely for malfeasance on such a grand scale to go undetected,” Perez said. “In the United States voting technology does not exist in a vacuum. There are documentation and transparency procedures that include a wide array of cross checks and safeguards. It borders on the absurd to believe that almost like wildfire that many votes could be deleted or flipped.”

Gregory Miller, the institute’s co-founder and COO, said even if such a big heist had been pulled off, there’s no way we would already know it.

“The only way you would know it is with a complete audit of the votes and a forensic analysis of the equipment nationwide,” Miller said. “There is no way it could have been determined in the time that has elapsed since the election. It’s just not possible.”

Perez points out that the genesis of the vote stealing/Dominion Voting Systems saga seems to lie in a number of cases last week that involved small-scale human error and were corrected long before they became part of the official count.

“These wild claims of massive technological mischief are stemming from a dubious connecting the dots exercise that started with simple cases of human error in Michigan and Georgia,” he said.

We wrote about one of the cases in Shiawassee County, Michigan. Here’s how we summed it up: “A data input error that briefly showed an unusually large uptick in votes for Joe Biden in Michigan prompted suspicions online and an unfounded claim of voter fraud. The error came down to a typo by a county’s reporting that was quickly corrected.”

But the five cases in the two states, some involving Dominion Voting equipment, triggered conspiracy theories on right-wing social media accounts. The New York Times investigated and found that there was no nefarious intent in any of them, and that at any rate, all were promptly detected and corrected.

And one other thing is clear: There is no credible evidence of switched and/or deleted votes, and federal, state and local officials have said so.

Fri Nov 13 , 2020
Lawyers for the Trump campaign have asked a judge to halt Pennsylvania’s election results certification, despite there being no meaningful evidence of voting irregularities. Richard Griffault, the Joseph P. Chamberlain Professor of Legislation at Columbia Law School, joins CBSN’s Anne-Marie Green to talk about the legal election challenges in a […] 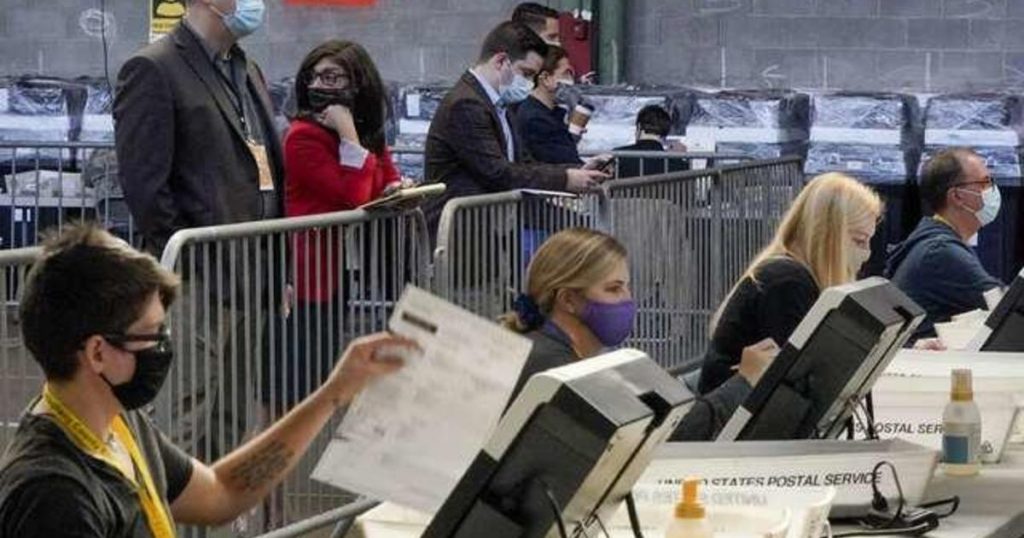