A pedestrian walk past the U.S. Capitol ahead of a possible partial government shut down in Washington, U.S., December 20, 2018. REUTERS/Joshua Roberts

WASHINGTON (Reuters) – U.S. President Donald Trump met with Republican senators on Friday after threatening a “very long” government shutdown just hours ahead of a midnight deadline, demanding $5 billion for border wall funding and seeking to shift blame for a holiday showdown to Democrats.

The Republicans gathered at the White House at 10:30 a.m. (1730 GMT) to discuss the dilemma. Senator Richard Shelby said he doubted the issue would be resolved on Friday, and John Cornyn, the No. 2 Republican in the Senate, said there may be room for compromise but that Trump is unlikely to go for any bill that does not include money for the border wall he has been promoting since 2015.

The Republican-led Senate already had approved funds for the government through Feb. 8 without money for the wall. On Thursday Trump pushed fellow Republicans in the House of Representatives to use the short-term funding bill as leverage to force through the border wall money despite Democratic objections.

In a series of early-morning tweets on Friday, Trump urged Senate Majority Leader Mitch McConnell to take up the amended bill from the House.

Last week Trump had said he would be “proud” to shut down the government over the issue of border security and “I’ll be the one to shut it down.” But on Friday he shifted the responsibility, saying on Twitter, “The Democrats now own the shutdown!”

“If the Dems vote no, there will be a shutdown that will last for a very long time,” he said in another tweet.

“Senator Mitch McConnell should fight for the Wall and Border Security as hard as he fought for anything,” Trump tweeted. “He will need Democrat votes, but as shown in the House, good things happen.”

He also urged McConnell to use the “nuclear option” to force a Senate vote on legislation with a simple majority, rather than the standard “supermajority” of 60 votes. But there was not enough support among Republican senators to do so.

The threat of a U.S. government shutdown, which would leave thousands of federal workers idled at Christmas, continued to fuel investor anxieties on Friday over the trajectory of global economic growth as world stocks extended a steep sell-off.

The showdown added to tensions in Washington as lawmakers also grappled with Trump’s sudden move to pull troops from Syria, which prompted Defense Secretary Jim Mattis to resign, and furthered concerns over the investigation of Russian meddling in the 2016 election that Trump won.

Three-quarters of government programs are fully funded through the end of the federal fiscal year next Sept. 30, including those in the Defense Department, Labor Department and Health and Human Services.

But funding for other agencies, including the Department of Homeland Security, the Justice Department and the Agriculture Department, is set to expire at midnight on Friday.

If the House measure is put to a vote in the Senate, Democrats have pledged to deny it passage.

The Senate was set to convene at noon EST (1700 GMT), and it remained unclear what would happen if the House measure fails there.

A partial government shutdown could begin, with affected agencies limiting staff to those deemed “essential” to public safety. Such critical workers, including U.S. border agents, and nonessential employees would not get paid until the dispute ends. National parks also would close unless the government declares them essential.

Alternatively, lawmakers could seek a solution that Trump finds acceptable, although it was unclear what that would be.

White House spokeswoman Sarah Sanders said Trump was “not going to back down on this fight” and would stay in Washington rather than go to his Mar-a-Lago resort in Florida for the holidays as planned.

Asked how long any potential shutdown would last, Sanders said: “Let’s hope that that doesn’t have to happen.”

Trump’s border wall was a key campaign promise in the 2016 election, when he said it would be paid for by Mexico, and sees it as a winning issue for his 2020 re-election campaign.

Democratic U.S. Senator Chris Coons on Friday said he hoped Trump would change course and support the Senate-passed bill, which includes funds for border security but not specifically for the wall.

“This is a fight more over message and the president trying to fulfill a campaign promise rather than substance,” Coons told CNN in an interview on Friday.

Fri Dec 21 , 2018
A White House effort to win support for a border wall describing the project as “border security” with “steel slats” only serves as a reminder that the president’s steep tariffs on the metal would make any such project much more expensive. So far this year, the price of milled steel […] 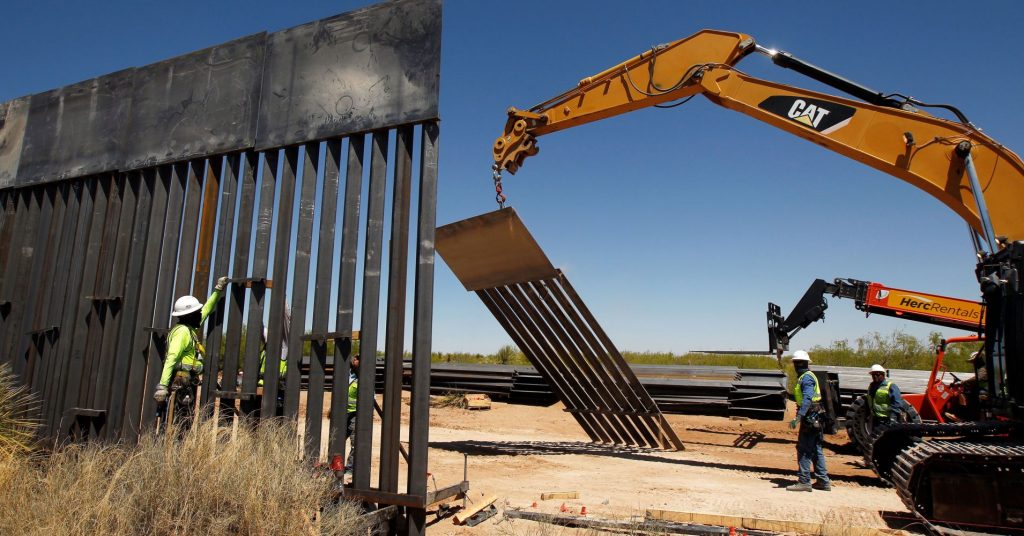