U.S. President Donald Trump walks down the West Wing colonnade from the Oval Office to the Rose Garden to deliver an update on the so-called “Operation Warp Speed” program, the joint Defense Department and HHS initiative that has struck deals with several drugmakers in an effort to help speed up the search for effective treatments for the ongoing coronavirus disease (COVID-19) pandemic, at the White House in Washington, U.S., November 13, 2020. REUTERS/Carlos Barria

WASHINGTON (Reuters) – President Donald Trump’s supporters will take to the streets on Saturday to back his unsubstantiated claims of election fraud as he pushes ahead with a flurry of longshot legal challenges to overturn President-elect Joe Biden’s victory.

Trump has made little headway in the courts with his lawsuits and for the first time on Friday he began to sound doubtful about his prospects, telling reporters “time will tell” who occupies the White House from Jan. 20.

There have been other pro-Trump protests around the country since Biden was projected the winner on Nov. 7, but they have been small and unfolded with few incidents.

The pro-Trump demonstrations in Washington and other cities are scheduled to feature a mix of the president’s backers, far-right personalities and members of the Oath Keepers militia and Proud Boys in a public display of support for his effort to stay in power.

Organizers have given the rallies various names, including the Million MAGA March, the March for Trump and Stop the Steal. MAGA is an acronym for the Trump campaign slogan “Make America Great Again.” Trump has tweeted his support.

Some left-wing groups are planning counter-demonstrations in Washington and other cities.

Biden further solidified his victory on Friday as results from Edison Research showed him winning Georgia, giving him a final tally of 306 Electoral College votes, far more than the 270 needed to be elected president and above Trump’s 232.

The 306 votes was equal to what Trump won in his 2016 victory over Hillary Clinton, which he then called a “landslide.”

Trump briefly appeared close to acknowledging the likelihood he will be leaving the White House in January during remarks at a White House event.

“This administration will not be going to a lockdown. Hopefully the, uh, whatever happens in the future – who knows which administration it will be? I guess time will tell,” Trump said in his first public remarks since Biden was projected as the election’s winner a week ago.

With the election outcome becoming clearer, Trump has discussed with advisers possible media ventures and appearances that would keep him in the spotlight ahead of a possible 2024 White House bid, aides said.

He is considering starting a television channel or social media company to compete with those he felt betrayed him and stifled his ability to communicate directly with Americans, according to several advisers.

In the near term, Trump is expected to campaign for Republican candidates in Georgia ahead of two Jan. 5 runoff elections that will determine which party controls the U.S. Senate.

Trump has refused to concede to Biden and claims without evidence that he was cheated by widespread election fraud. State election officials report no serious irregularities, and several of his legal challenges have failed in court.

A Michigan state court on Friday rejected a request by Trump’s supporters to block the certification of votes in Detroit, which went heavily in favor of Biden. And lawyers for Trump’s campaign dropped a lawsuit in Arizona after the final vote count there rendered it moot.

Federal election security officials have found no evidence that any voting system deleted, lost or changed votes, “or was in any way compromised,” two security groups said in a statement released on Thursday by the lead U.S. cybersecurity agency.

To win a second term, Trump would need to overturn Biden’s lead in at least three states, but he has so far failed to produce evidence that he could do so in any of them.

States face a Dec. 8 deadline to certify their elections and choose electors for the Electoral College, which will officially select the new president on Dec. 14.

Trump’s refusal to accept defeat has stalled the official transition. The federal agency that releases funding to an incoming president-elect, the General Services Administration, has yet to recognize Biden’s victory, denying him access to federal office space and resources.

But Biden, who will meet with advisers about the transition on Saturday in his home state of Delaware, has pressed ahead with the process, identifying legislative priorities, reviewing federal agency policies and preparing to fill thousands of jobs in the new administration.

“We’re charging ahead with the transition,” Jen Psaki, a senior adviser to Biden’s transition team, said while stressing Biden still needs “real-time information” from the Trump administration to deal with the resurgent coronavirus pandemic and national security threats.

Although the national popular vote does not determine the election outcome, Biden was ahead by more than 5.3 million votes, or 3.4 percentage points. His share of the popular vote, at 50.8%, was slightly higher than Ronald Reagan’s in 1980 when he defeated incumbent Jimmy Carter.

Thousands of Thai protesters call for removal of prime minister

Sat Nov 14 , 2020
A protester attends a rally to call for the ouster of Prime Minister Prayuth Chan-ocha’s government and reforms in the monarchy in Bangkok, Thailand, November 14, 2020. REUTERS/Soe Zeya Tun November 14, 2020 By Matthew Tostevin and Chayut Setboonsarng BANGKOK (Reuters) – Thousands of people protested in Bangkok on Saturday […] 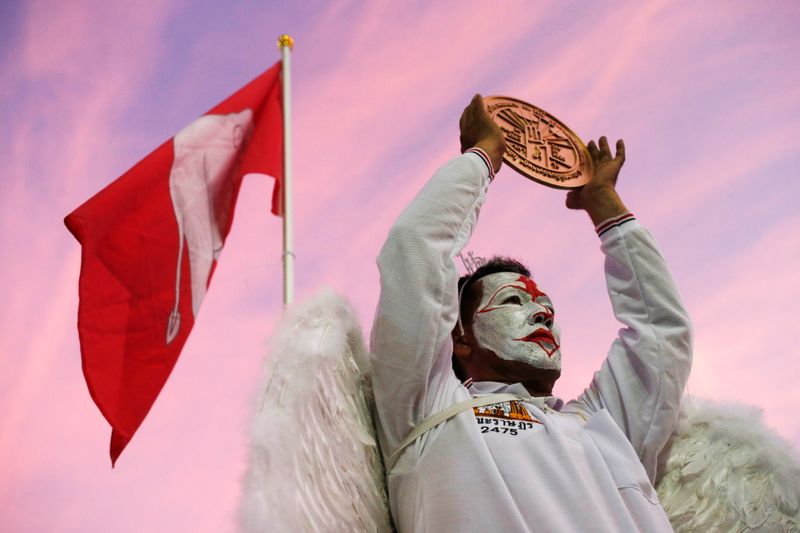