Former President Trump is suing Facebook, Twitter and YouTube for banning his accounts, arguing in remarks on Wednesday that they have violated his First Amendment right to free speech in “illegal, unconstitutional censorship.”

Mr. Trump was barred from Twitter and Facebook after a mob of his supporters overran the Capitol in a deadly attack on January 6, with the companies citing concerns that he would encourage more violence.

“We’re demanding an end to the shadow-banning, a stop to the silencing and a stop to the blacklisting, banishing and canceling that you know so well,” Mr. Trump said on Wednesday. “I am confident that we will achieve a historic victory for American freedom and at the same time freedom of speech.”

In complaints filed with the U.S. District Court for the Southern District of Florida, Mr. Trump asked the court to overturn Section 230 of the Communications Decency Act, which protects social media companies from liability for content posted on their platforms, and restore his accounts on Twitter and Facebook, as well as his channel on YouTube. He’s also asking the court to prevent Twitter, Facebook and YouTube from “exercising censorship, editorial control or prior restraint in its many forms” over the posts and uploads of the presidents.

Mr. Trump is being represented by John Q. Kelly and John P. Coale, who are directing a team of 20 attorneys, according to Coale. Coale said his legal team includes attorneys he worked with in Louisiana when negotiated for smokers in the tobacco trials of the 1990s.

The legal effort is being funded the American First Policy Institute, a think tank and 501(c)(3) non-profit created earlier this year by former Trump administration officials and headed up by Brooke Rollins and Linda McMahon.

Coale told CBS News he anticipates “thousands and thousands” will join the former president in his class-action lawsuit. “It’s basically anybody who was harmed or censored in one way or another by these companies, whether it’s editorializing what they tweet or what they put on Facebook. The reason that Donald Trump is the main class rep is because he got it worse than anybody.” Lawyers plan to have “subclasses” for a range of individuals stripped of social media privileges.

As spelled out in the complaint, Coale alleges that removals by Twitter, Facebook and YouTube amount to censorship and violate a First Amendment right to free speech, despite protections under Section 230 of the Communications Act of 1934.

Coale said there will be “a lot of high profile people … coming out of the woodwork” in the coming days.  There were a number of Trump associates and backers kicked off the platform, including Steve Bannon, Roger Stone and Proud Boys leader Enrique Tarrio.

“I think it’s going to be thousands and thousands of people. So that’s why we’re hearing today from lots and lots of people. I think it’ll be a pretty good class size actually, when it’s all said and done.”

The former president’s legal team plans to file a motion for preliminary injunction early next week – likely Monday or Tuesday – in an attempt to prohibit an injuction from the social media companies currently banning the former president and others from their platforms.

Coale said he first talked to the former president over the phone about three months ago, and Mr. Trump agreed with Coale that they would keep the lawsuit under wraps until Wednesday’s announcement.

The Facebook Oversight Board upheld the initial suspension of Mr. Trump’s account in May, and the company announced in June that it would ban the former president from its platform for at least two years.

Mr. Trump’s accounts were banned after Twitter and Facebook found that his posts encouraged the attack on the Capitol. In a video posted to Facebook on January 6, Mr. Trump falsely claimed that the presidential election had been stolen from him as rioters overran the building seeking to overturn the election results.

He later posted to both Twitter and Facebook that “these are the things that happen when a sacred landslide election victory is so unceremoniously & viciously stripped away from great patriots who have been badly & unfairly treated for so long.”

Although his online influence has been diminished, Mr. Trump has continued to spread falsehoods about the election, which are also promoted by many Republican lawmakers. A former spokesperson for Mr. Trump also recently launched a new social media site called “GETTR,” advertised as an alternative to the major platforms.

Here are the lawsuits:

More Americans say they are "cutting the cord" these days

Wed Jul 7 , 2021
More and more Americans seem to be “cutting the cord” and switching away from cable and satellite subscription services in favor of streaming services, reflecting changes in the way they consume television.   Five years ago, 63% of Americans mostly watched television through cable and satellite. Today, that percentage has […] 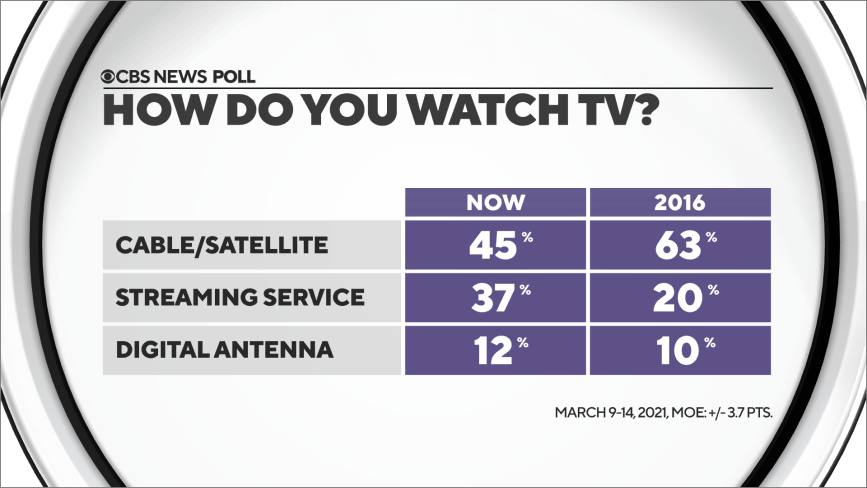