President Donald Trump‘s promise to protect pre-existing conditions coverage, perhaps the most popular Affordable Care Act provision, rings hollow. That’s because his administration is backing a lawsuit that would scrap it.

As Republicans face midterm election pressure from an energized Democratic base over their efforts to repeal Obamacare, the president tweeted Thursday that “all Republicans support people with pre-existing conditions” or “will after I speak to them” if they do not already. He added that “I am in total support.”

His administration’s actions suggest otherwise. The Justice Department has declined to defend the health care law in court against a suit from 20 GOP-led states challenging Obamacare’s constitutionality. They argue the rest of the law does not hold up after Republicans rolled back its individual mandate provision last year. By doing so, the Trump administration tacitly supported the suit, which could roll back Obamacare’s coverage guarantees for people with pre-existing conditions if it succeeds.

As Democrats try to flip control of the House, candidates across the country have attacked the GOP for threatening coverage for people with pre-existing conditions. Amid the broadsides, Republican lawmakers who have pushed to repeal Obamacare for years are pledging to protect the provision. The GOP has good reason for its sudden shift on the issue: about a quarter of Americans do not want pre-existing conditions protections to be reversed, according to a Kaiser Family Foundation survey earlier this year.

That shift includes Trump, who ran for president in 2016 on scrapping Obamacare and nearly succeeded in doing so last year. In his recent string of promises to protect pre-existing conditions coverage, he has mentioned neither his push to repeal the law nor the lawsuit to dismantle it that his administration is backing.

The White House did not immediately respond to CNBC’s request to comment on Trump’s apparent contradiction over pre-existing conditions coverage.

Arguments over the provision have played out in key Senate and House races across the country. It is a particularly prominent issue in competitive Senate races in Missouri and West Virginia, where state attorneys general and GOP Senate candidates Josh Hawley and Patrick Morrisey signed on to the lawsuit filed by states.

In a Missouri Senate election debate Thursday, Hawley said “we can protect people and we must with pre-existing conditions.” But he reiterated his support for repealing and replacing Obamacare, saying people “shouldn’t be forced to pay the prices they are paying now” and “shouldn’t have the narrowing of networks that we are seeing all over this state because of Obamacare.”

Democratic incumbent Sen. Claire McCaskill, one of the most vulnerable senators up for re-election this year, argued Hawley had no concrete plan. She said “you don’t go to court and get rid of important protections when there is no backup, when people will be in freefall.”

It is unclear how Republicans would shield people with pre-existing conditions outside the structure of Obamacare. As they face electoral pressure over health care, GOP lawmakers have proposed legislation to protect those patients.

But the proposals are not as ironclad as Obamacare and come with possible loopholes that could jeopardize coverage, according to Politifact.

Trump rallies in Arizona as part of western tour

Fri Oct 19 , 2018
President Trump is in Mesa, Arizona, Friday evening to rally for Republican candidates in the state. This rally is part of a three-state tour through the west. President Trump held a rally in Montana on Thursday and is holding a rally in Elko, Nevada, on Saturday. The president is meeting […] 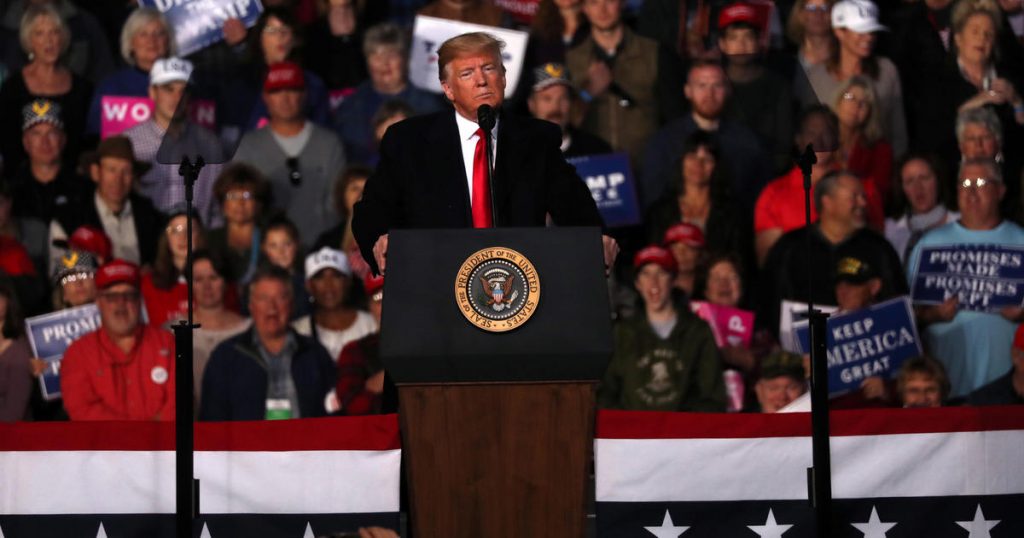