MANILA (Reuters) – U.S. President Donald Trump said on Monday he had a “great relationship” with his Philippine counterpart, Rodrigo Duterte, while a White House official said human rights got only a brief mention when the two met on the sidelines of an Asian summit.

Their meeting was one of the most anticipated of the summit of East and Southeast Asian leaders in Manila, with human rights groups pressing Trump to take a tough line on Duterte over his bloody war on drugs, in which thousands of people have been killed.

“We are your ally. We are an important ally,” Duterte told Trump at the beginning of their talks, according to reporters allowed in to the meeting room.

Trump replied: “We’ve had a great relationship. This has been very successful. And the ASEAN (Association of South East Asian Nations) conference has been handled beautifully by the president in the Philippines.”

When a reporter asked Trump if he would raise human rights at the meeting, Duterte said: “Whoa, whoa. This is not a press statement. This is the bilateral meeting.”

“The conversation focused on ISIS (Islamic State), illegal drugs, and trade. Human rights briefly came up in the context of the Philippines’ fight against illegal drugs.”

Duterte, who has spoken highly of Trump, said last week he would tell the U.S. president to “lay off” if he were to raise accusations of rights violations.

Duterte has been called the “Trump of the East” for his brash style and provocative language.

Trump was criticized in May for praising Duterte during a phone call for the “great job” he was doing to counter illegal narcotics.

More than 3,900 people have been killed in a war on drugs that Duterte declared when he took office last year. His government says the police act in self defense, but critics say executions are taking place with no accountability.

The United States and the Philippines, a former U.S. colony, have been strategic allies since World War Two. But their relations have been strained by anti-U.S. outbursts from Duterte and his enthusiasm for better ties with Russia and China.

However, Duterte clearly appears to be getting on better with Trump than with his predecessor Barack Obama.

The two leaders seem to have warmed to each other after meeting for the first time on Saturday at an Asia-Pacific Economic Cooperation (APEC) group meeting in Vietnam.

On Sunday, Duterte crooned hit Filipino love song “Ikaw” (You) at a gala dinner for summit leaders in Manila, saying it was on “the orders” of Trump.

One of the song’s verses, translated from Filipino, begins: “You are the light in my world, a half of this heart of mine”.

“Ladies and gentlemen, I sang uninvited, upon the orders of the commander-in-chief of the United States,” Duterte said later, according to the ABS-CBN news channel.

“Rodrigo,” he said, “I would like to commend you on your success as ASEAN chair at this critical moment in time, and in the association’s history.”

Duterte’s Communications Secretary Martin Andanar told reporters the two leaders got on well, after a tense relationship between Duterte and Obama.

“The issue between President Duterte and former President Barack Obama is a thing of the past,” Andanar said.

“They really hit it off,” he said of Trump and Duterte. 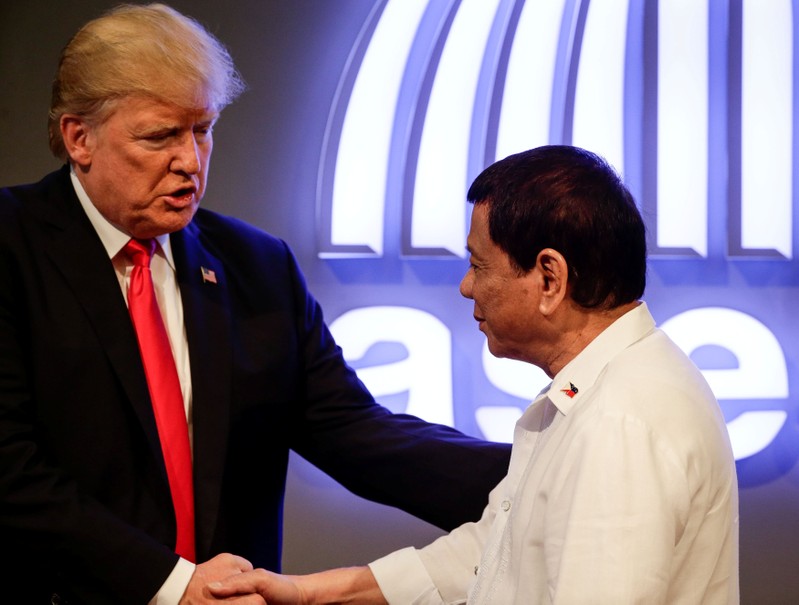