President Donald Trump left Walter Reed National Military Medical Center on Monday to return to the White House, where he will continue to be treated for the coronavirus even as he looks to restart his reelection campaign.

Trump, dressed in a dark suit and blue tie and wearing what appeared to be a surgical face mask, tapped a handrail as he descended the steps on his own outside the hospital. He took no questions from the gaggle of reporters waiting for him, but said “thank you very much” as he walked by. He then stepped into a black SUV, which drove him to his helicopter, Marine One.

As he entered the White House through the south portico, Trump turned to watch Marine One fly off. As he did, he appeared to remove his mask and put in the outer pocket of his suit jacket. He saluted the chopper and eventually entered the residence, without putting his mask back on.

Shortly before his departure, Trump said he planned to promptly return to the campaign trail, where he has less than a month left to fight for a second term in office.

“Will be back on the Campaign Trail soon!!! The Fake News only shows the Fake Polls,” Trump tweeted.

Trump had entered the hospital just three days earlier on Friday evening, the same day he announced in a tweet that he and first lady Melania Trump had tested positive for Covid-19.

But earlier Monday, Trump said he would come back to the White House by that evening, saying he is “feeling really good,” and telling his nearly 87 million followers, “Don’t be afraid of Covid.”

More than 210,000 people have died from Covid-19 in the United States, according to data compiled by Johns Hopkins University.

In a press briefing following that tweet, Trump’s doctors said that the president’s condition has “continued to improve” over the past 24 hours.

But “he may not entirely be out of the woods yet,” Dr. Sean Conley, the White House physician, cautioned.

The president remains infected with the virus. His treatment will continue at the White House, his doctors said.

When questioned by reporters outside the hospital, Conley said that the president’s medical team is “cautiously optimistic,” but added, “we’re in a bit of uncharted territory” with regard to Trump’s treatment regimen.

“So we’re looking to this weekend. If we can get through to Monday with him remaining the same or improving, better yet, then we will all take that final deep sigh of relief,” Conley said.

Throughout the roughly 15-minute presser, Conley had been peppered with specific questions about the president’s health, such as when his last negative test results were taken. Conley refused to answer many of them, citing federal disclosure rules.

“There are HIPAA rules and regulations that restrict me in sharing certain things, for his safety and his own health and reasons,” he said in response to a question about why he would not say what the president’s lung scans showed.

Conley did add, however, that Trump “has not been on any fever-reducing medications for over 72 hours.” Trump will receive another dose of the antiviral therapy remdesivir — one of the many treatments that he has taken — before his departure, Conley said.

Minutes before announcing his imminent departure, Trump defended his decision Sunday to make a drive-by appearance in front of a group of his supporters outside the hospital. Health experts had condemned the move, noting that the president, who is possibly still contagious, may have put Secret Service members at risk.

“It is reported that the Media is upset because I got into a secure vehicle to say thank you to the many fans and supporters who were standing outside of the hospital for many hours, and even days, to pay their respect to their President,” Trump tweeted Monday afternoon.

When asked how that Sunday drive could be considered medically safe, Conley said that the Secret Service members in the car were all wearing protective equipment in consultation with infectious disease authorities.

Health experts say that the virus can have a lasting impact on health, and that a full recovery is sometimes not possible.

“This virus does more than kill people. As a Covid survivor myself, I can tell you that you don’t necessarily recover fully. You can have cognitive dysfunction. You can be fatigued. There are all sorts of people with this long-haulers syndrome, so even if he comes through this without this terrible reaction which can occur around days seven to 10, he may not recover fully. We won’t know that for some time,” Dr. Ian Lipkin, an infectious disease expert at Columbia University, said Monday on CNBC’s “Closing Bell.”

Trump will be leaving Walter Reed as a growing list of officials in his administration test positive for the virus.

Earlier Monday, White House press secretary Kayleigh McEnany announced that she had tested positive for Covid-19 and would begin a “quarantine process.” The same day, it was revealed that two of her deputies also tested positive.

At least 18 people in the White House, or connected to Trump’s reelection campaign or to recent White House events, have tested positive for Covid-19 since late last week.

Trump’s personal battle with the virus came after spending months downplaying the threat of the pandemic and at times questioning, or simply ignoring, the strict social distancing measures that have been recommended by health experts or implemented by state leaders.

The president has even mocked his reelection opponent for taking the precautions extolled by health experts in his own administration.

With less than a month to go until the Nov. 3 election, polls show former Vice President Joe Biden extending his lead over Trump in the wake of the candidates’ brutal first debate last week.

Since announcing his diagnosis early Friday morning, the president has been unable to forge ahead with his heavy campaign schedule, nor has he been able to lead the signature in-person campaign rallies that helped propel him to victory in 2016.

The same day he revealed that he and first lady Melania Trump had tested positive for Covid-19, Trump left the White House for Walter Reed. While officials initially said Trump was experiencing only “mild” symptoms, it was shortly revealed that the president was being treated with numerous drug therapies.

On Sunday, Trump’s doctors said they had begun treating him with the steroid dexamethasone. Conley had already revealed that the president has taken remdesivir, along with zinc, vitamin D, melatonin, a daily aspirin and the histamine blocker famotidine. Trump has also taken an experimental antibody cocktail from pharmaceutical giant Regeneron, Conley said.

— CNBC’s Christina Wilkie and Kevin Stankiewicz contributed to this report.

Special Report: Trump returns to the White House after testing positive for coronavirus 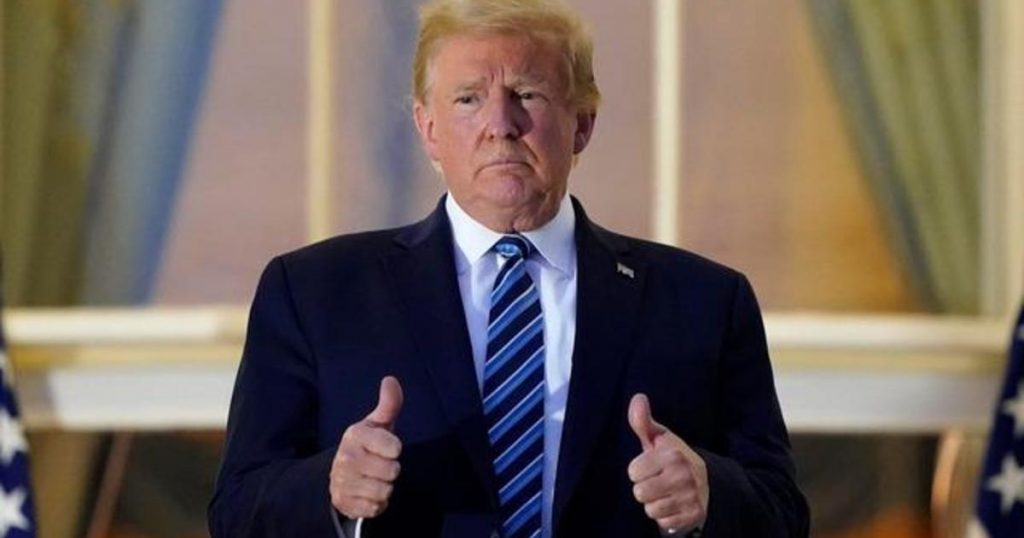