President Donald Trump, in an extraordinary phone call this weekend, pressured Georgia’s Republican secretary of state to overturn President-elect Joe Biden’s victory in the state by finding votes to slant the count in his favor, according to audio obtained by NBC News.

Secretary of State Brad Raffensperger resisted pressure from Trump to change Georgia’s election results even as the president made veiled threats about potential criminal prosecution if he was refused. The call took place Saturday.

Trump, who has refused to concede the election, said during the call that he wanted “to find 11,780 votes” to change the result in Georgia.

He told Raffensperger, a fellow Republican, that Georgia’s vote count was off by hundreds of thousand of votes and suggested that the secretary of state announce he had recalculated the numbers to show a Trump victory in the key swing state.

Raffensperger and the secretary’s general counsel, attorney Ryan Germany, also pushed back on Trump’s assertions that ballots had been shredded or that the company Dominion had removed parts of voting machines in Georgia that would show more Republican votes.

The contents of the phone call were first reported by The Washington Post.

Trump referenced the Saturday phone call in a Sunday morning tweet, saying that Raffensperger could not answer his questions about alleged voter fraud and saying “he has no clue.” Raffensperger responded on Twitter, writing, “What you’re saying is not true. The truth will come out.”

Georgia is one of several states where the Trump campaign or the president’s supporters have fought unsuccessfully to change or invalidate vote counts since Trump’s loss to Biden in the November election.

None of the lawsuits, recounts or investigations in any state has found the type of widespread voter fraud or miscounting that would be needed to flip the election in Trump’s favor.

The vote counts in Georgia and other states from the November election have already been certified, and the Electoral College has confirmed Joe Biden’s victory.

The president also hinted at potential legal consequences for Raffensperger if his demands were not met.

Bob Bauer, a senior adviser to President-elect Biden, slammed Trump’s actions in a statement on Sunday.

“We now have irrefutable proof of a president pressuring and threatening an official of his own party to get him to rescind a state’s lawful, certified vote count and fabricate another in its place,” Bauer said. “It captures the whole, disgraceful story about Donald Trump’s assault on American democracy.”

The phone call comes just days before two key Senate runoffs in Georgia, where victories by the Democratic candidates in both races would flip control of the chamber, and less than a month before Biden’s inauguration. Trump is holding a rally in the state for the Republican candidates on Monday.

The White House did not immediately respond to CNBC’s request for comment.

Biden’s victory in Georgia was a major shift in the Republican-controlled state as he became the first Democratic presidential candidate to win since Bill Clinton in 1992. After the initial count showed Biden as the winner in the state, Georgia conducted a recount that showed the same result. Raffensperger certified the result on Nov. 20.

The narrow margin of victory and the presence of Republicans in key offices has made it a target in the Trump team’s efforts to change the results of the election. Trump has also pressured Gov. Brian Kemp to help him overturn the result, but Kemp said it was not legal for him to call for a special legislative session to appoint a new slate of presidential electors.

Biden’s victory is scheduled to be certified by a joint session of Congress on Wednesday, but a group of 11 Republican senators and senators-elect, including Texas Sen. Ted Cruz, want to delay the move, as do some Republican House members. Vice President Mike Pence “welcomes” the move to delay the certification, according to his chief of staff, but others such as Utah Sen. Mitt Romney have harshly criticized the plan.

Trump is expected to attend protests against the certification in Washington on Wednesday.

Gerry Marsden, Gerry and the Pacemakers frontman, has died at 78

Sun Jan 3 , 2021
Gerry Marsden of Gerry and The Pacemakers performs on the TV show Beat-Club in 1965 in Bremen, Germany. Photo by Gunter Zint/K & K Ulf Kruger OHG/Redferns via Getty Images Gerry Marsden, the British singer who was instrumental in turning a song from the Rodgers and Hammerstein musical “Carousel” into […] 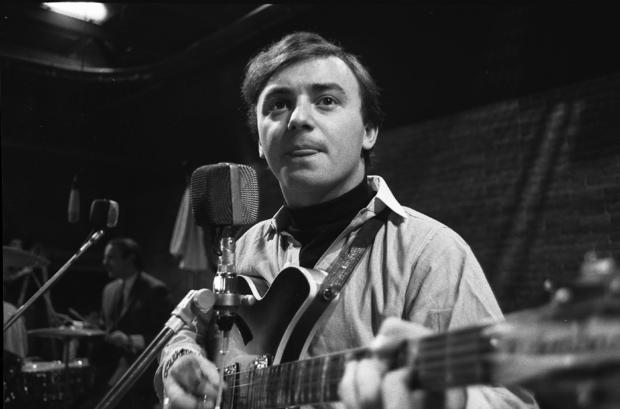