White House press secretary Kayleigh McEnany and two of her deputies have tested positive for the coronavirus as President Donald Trump remains hospitalized with the virus.

McEnany and her two deputies, Chad Gilmartin and Karoline Leavitt, are among at least 18 people people in the White House, or connected to Trump’s reelection campaign or to recent White House events, who have tested positive for Covid-19 since late last week.

“After testing negative consistently, including every day since Thursday, I tested positive for COVID-19 on Monday morning while experiencing no symptoms,”  McEnany said on Twitter.

“No reporters, producers, or members of the press are listed as close contacts by the White House Medical Unit.”

In addition, at least three journalists who were at the White House over the past week have tested positive for the coronavirus, according to the White House Correspondents Association.

McEnany, who is married and gave birth to a daughter last November, briefed reporters at the White House on Thursday, hours before Trump’s advisor Hope Hicks was revealed to have tested positive.

Trump announced his diagnosis and that of his wife, first lady Melania Trump, shortly after Hicks’ diagnosis became public.

“I definitely had no knowledge of Hope Hicks’ diagnosis prior to holding a White House press briefing on Thursday,” McEnany tweeted Monday.

“As an essential worker, I have worked diligently to provide needed information to the American People at this time,” she wrote.

“With my recent positive test, I will begin the quarantine process and will continue working on behalf of the American People remotely.”

In February, McEnany, during an appearance on Fox News that preceded her appointment as press secretary, said that under Trump’s leadership “We will not see diseases like the coronavirus come here, we will not see terrorism come here, and isn’t that refreshing when contrasting it with the awful presidency of President [Barack] Obama?”

When her comments to Fox News resurfaced after her appointment, McEnany on Twitter accused  a reporter who had tweeted her interview of “ridiculous spin,” and added, “I was asked about travel restrictions & stated the intent of those restrictions: ‘We will not see diseases like the coronavirus come here. ‘ ”

“President Trump works to defeat the invisible enemy while you mislead the nation!” McEnany wrote on a post aimed at that reporter.

In White House circles, McEnany has become a symbol of how closely held the early diagnoses of Covid-19 were among high-ranking officials.

While Hicks tested positive for the coronavirus early Thursday, McEnany was not immediately informed of the diagnosis, nor that she herself had been exposed to the virus, until Thursday evening, when press reports began to emerge about Hicks.

A senior White House official told NBC News that McEnany was pulled from the group accompanying Trump to his golf club in Bedminster, New Jersey, on Thursday but was not told why.

The official said McEnany did not learn until later that afternoon that Hicks had tested positive that day.

In the hours between Hicks’ positive test and when McEnany learned of it, she briefed the press in the White House briefing room while not wearing a mask.

McEnany told reporters on Saturday that she had tested negative, and she was seen wearing a mask on White House grounds on Friday when the president was moved to Walter Reed National Military Medical Center.

But on Sunday, she removed her mask in order to tape an appearance on Fox News. She removed it again moments afterward to speak to reporters on the White House North Lawn.

As of Sunday night, the White House had not reached out to any of the three infected correspondents to conduct contact tracing.

Ben Williamson, senior communications advisor at the White House, tweeted Monday about McEnany’s lack of a mask: “For those asking about this: @PressSec briefly removed her mask at the mic to answer questions, was there for two questions and only 58 seconds.”

White House Correspondents’ Association President Zeke Miller said in a statement, “We wish Kayleigh, the president and everyone else struggling with the virus a swift recovery.”

“As of this moment we are not aware of additional cases among White House journalists, though we know some are awaiting test results,” said Miller, an Associated Press reporter. “We strongly encourage our members to continue following CDC guidance on mask-wearing and distancing — especially when at the White House — and urge journalists to seek testing if they were potentially exposed.”

Editor’s note: This story was updated to note that at least 18 people connected to the White House have tested positive for Covid-19 recently.

Mon Oct 5 , 2020
If a ballot is tossed because of some issue — maybe a missing signature or it got damaged — will the voter be notified that the ballot’s been invalidated By The Associated Press October 5, 2020, 4:37 PM • 2 min read Share to Facebook Share to Twitter Email this […] 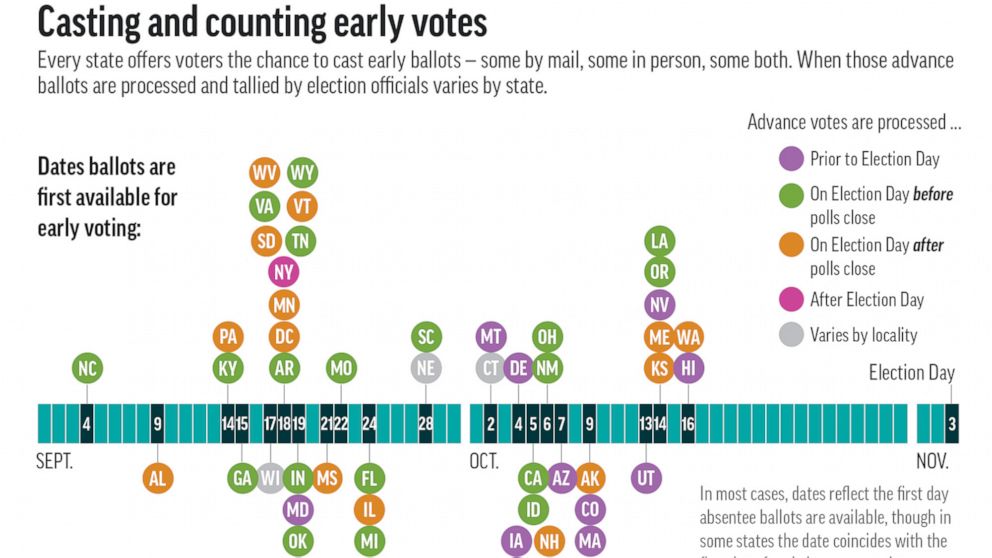