President Trump and first lady Melania Trump are continuing their commemoration of the 75th anniversary of the D-Day invasion of Nazi-occupied northern France by Allied forces. After a day of events in Portsmouth, England, where the president spoke alongside several other world leaders marking the historic occasion, the focus shifted on Thursday to the site of the invasion — the beaches of Normandy.

The risky maneuver launched on June 6, 1944 saw more than 150,000 American, British and other Allied troops cross the English Channel to halt the advance of Adolph Hitler’s war machine in northern France. It would cost the Allies some 10,000 men, but it would become the turning point of World War II.

Mr. Trump was joining French President Emmanuel Macron and his wife Brigitte at a ceremony marking the somber occasion.

President Trump and First Lady Melania Trump touched down in Normandy on Thursday morning aboard Air Force One, after making the trip from Ireland.

Mr. Trump was among the world leaders to deliver speeches at a ceremony commemorating the 75th anniversary of the D-Day invasion of Nazi-occupied northern France by Allied forces in World War II.

After landing at the airport in Caen, Normandy, Mr. Trump quickly boarded his Marine One Helicopter for the short flight to the landing zone at the Normandy American Cemetery, where the day’s ceremony was being held.

Trump to laud the fallen and our “cherished alliance”

The White House released excerpts of Mr. Trump’s D-Day commemoration speech in advance on Thursday morning, a rare move for an administration.

“Today, we remember those who fell here, and we honor all who fought here. They won back this ground for civilization,” Mr. Trump was to tell the gathered world leaders at the ceremony at the Normandy American Cemetery, where some 9,000 U.S. casualties were laid to rest.

Mr. Trump was to laud the tens of thousands of Allies forces who faced the German war machine head on as, “the citizens of free and independent nations, united by their duty to their compatriots and to millions yet unborn.”

In a nod to the international bonds that the United States helped forge during that fight, embodied today in the NATO alliance which Mr. Trump has been critical of, he was also to praise “all of our friends and partners – our cherished alliance was forged in the heat of battle, tested in the trials of war, and proven in the blessings of peace. Our bond is unbreakable.”

At the World War II memorial in Washington, D.C., commemorations of the 75th anniversary of D-Day stretched on for hours on Wednesday. The event included a public reading of the names of some 9,000 troops who are buried at the Normandy American Cemetery in France.

Seventy-five years after he parachuted into Normandy in the vanguard of the D-Day invasion, Tom Rice, 97, returned for the anniversary. On June 6, 1944, he was among the 18,000 paratroopers dropped behind enemy lines.

Their job was to prevent German reinforcements from reaching the front as the main invasion force stormed the beaches. “Chase ’em out, run ’em across fields, through cemeteries, jumping over tombstones, chase ’em all the way back to the German border as fast as we can,” Rice said.

It was dark then, so he’s not sure exactly where he landed. But in a field not far from that fateful spot, he made a tandem jump — and a perfect landing — on Wednesday this week, to mark the momentous anniversary.

“I represent a whole generation,” he said. Asked how his D-Day comrades would have felt about him jumping, Rice told The Associated Press, “They would love it.”

On June 6, 1944, over 150,000 Allied soldiers landed on the beaches of Normandy, France. Their mission: to free Europe from Nazi control.

It was the largest seaborne invasion in history, carried out by American, British, Canadian and Australian troops with soldiers also coming from a total of 12 countries. At stake was the liberation of Western Europe from Hitler’s rule.

Some historians consider it the single most important day in the 20th century. The attack had been planned for more than a year. More than 11,000 aircraft and 5,000 ships landed across Normandy’s five beachheads, code-named Utah, Gold, Juno, Sword, and Omaha.

The amphibious landings were supported by an airborne drop of 13,000 paratroopers, with 4,000 additional men gliding in behind enemy lines later that night. Disorganization and confusion characterized the initial landing, but up until that point the Allies managed to keep it a secret, taking the Germans by surprise.

The Allies would not be deterred in the face of an estimated 10,000 casualties, with 4,414 confirmed dead. Between 4,000 and 9,000 German troops were killed. The invasion of Normandy brought a decisive Allied victory over the Axis powers in France, and set the stage for victory over all of Europe one year later.

Thu Jun 6 , 2019
CBSN Some historians consider it the single most important day in the 20th century: D-Day. On June 6, 1944, 150,000 Allied forces stormed the beaches of Normandy, France, and began to turn the tide in World War II, leading to the eventual defeat of Nazi Germany. President Trump is in […] 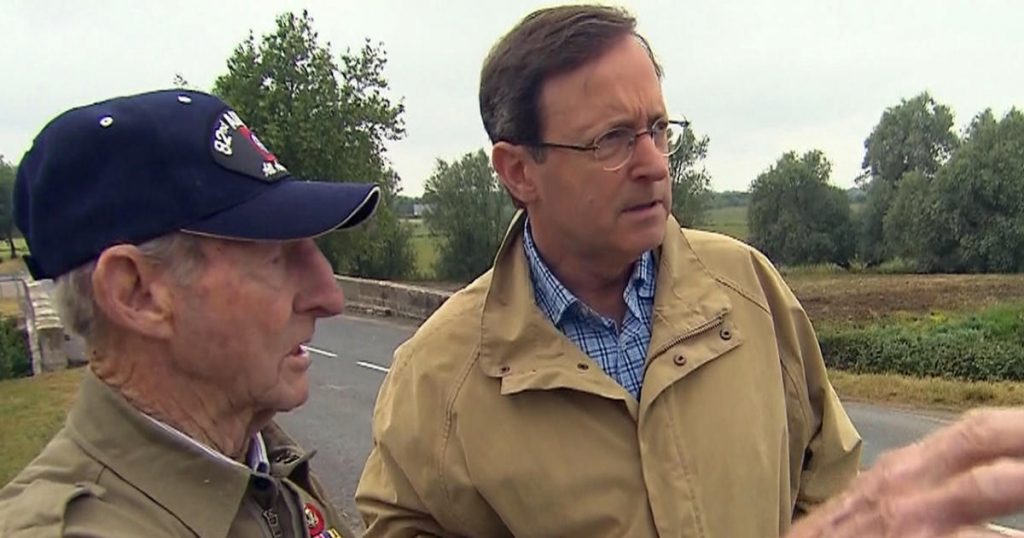