Barring anything unusual happening, the president’s Electoral College victory could easily surpass his 2016 win over Democrat Hillary Clinton, which came by a 304-227 count.

Moody’s based its projections on how consumers feel about their own financial situation, the gains the stock market has achieved during Trump’s tenure, and the prospects for unemployment, which has fallen to a 50-year low. Should those variables hold up, the president looks set to get another four-year term.

The modeling has been highly accurate going back to the 1980 election, missing only once.

“If the economy a year from now is the same as it is today, or roughly so, then the power of incumbency is strong and Trump’s election odds are very good, particularly if Democrats aren’t enthusiastic and don’t get out to vote,” said Mark Zandi, chief economist at Moody’s Analytics and co-author of the paper along with Dan White, the firm’s director of government counseling and public finance research, and Bernard Yaros, assistant director and economist. “It’s about turnout.”

Three models show Trump getting at least 289 electoral votes, assuming average turnout. His chances decrease with maximum turnout on the Democratic side and increase with minimum turnout expected.

Of the three models, he does best under the “pocketbook” measure of how people feel about their finances. In that scenario, assuming average nonincumbent turnout, he gets 351 electoral votes to the generic Democrat’s 187. “Record turnout is vital to a Democratic victory,” the report states. “Our ‘pocket¬book’ model is the most economically driven of the three. If voters were to vote primarily on the basis of their pocketbooks, the president would steamroll the competition,” the report states. “This shows the importance that prevailing economic sentiment at the household level could hold in the next election.”

Stock market levels also are key, and the two are intertwined. Zandi said that even a garden-variety 12% market correction around election time could sway the race, as could an unexpected downturn in the economy.

The results might come as a surprise given Trump’s consistently low favorability ratings — 40% in the latest Gallup poll — and as most head-to-head matchups against Democrats show the president losing.

However, the report said that Trump’s relatively stable ratings help provide a good benchmark for how he will do once election time comes.

Zandi said the race could come down a few key counties in Pennsylvania, which Trump flipped in 2016 after the state had voted Democrat in the previous five presidential elections. Specifically, he said Luzerne County, in the northeast part of the state, “is the single-most important county, no kidding, in the entire election.” The longtime Democratic stronghold favored Trump, 51.8% to 46.8% in the election.

Trump doesn’t even have to win the county, but merely needs a strong turnout, Zandi said.

The Moody’s models have been backtested to 1980 and were correct each time — except in 2016, when it indicated Clinton would win a narrow victory. The authors attributed “unexpected turnout patterns” in Trump’s favor caused the error and they adjusted for that in the latest projections. They also said the will be updating the projections as conditions develop and change.

Saddleridge fire began near base of transmission tower, investigators say

Tue Oct 15 , 2019
The Saddleridge Fire that has burned through thousands of acres in Southern California began near the base of a transmission tower in northern Los Angeles, according to investigators. Fire officials determined that inferno, which erupted around 9 p.m. Tuesday, originated in a 50-by-70 foot area directly beneath an electrical transmission […] 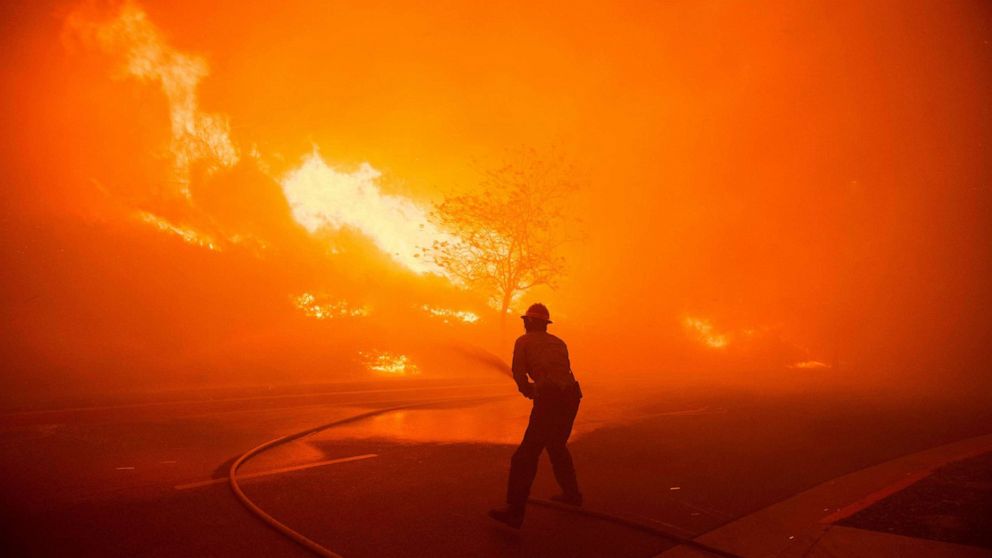