By Mimi Dwyer and Gabriella Borter

PHOENIX (Reuters) – Backers of President Donald Trump ramped up demonstrations on Thursday night against an election they believe was rigged or being stolen, in some cases bringing guns or clashing with counter-protesters as they rallied in battleground states.

In Arizona, one of five U.S. battleground states where votes were still being counted in the too-close-to-call race between Trump and Democratic challenger Joe Biden, Trump supporters massed outside the Maricopa County Elections Department in Phoenix.

Some briefly chased a man who held up a sign depicting the president as a Nazi pig behind a stage where right-wing talk-radio host Alex Jones was speaking.

Police intervened and broke up the altercation after the man and his small group of counter-demonstrators were surrounded by Trump activists, according to a Reuters witness. There were no reports of injuries.

“They are trying to steal the election but America knows what happened and it’s fighting back,” Jones told the throng of some 300 people. “1776 is the answer to 1984,” he said, an apparent reference to the U.S. Declaration of Independence and the dystopian George Orwell novel.

In Milwaukee, some 50 Trump supporters gathered in front of a city building where votes were being counted, blasting country music, waving flags and carrying signs reading “Recount” and “Rigged”.

Roughly a dozen counter-protesters arrived after an hour, shouting “Black lives matter” and “say their names,” referring to the victims of police brutality. Others threw eggs at the Trump supporters from a passing car.

“My country’s future is what brings me out here tonight,” said Mitchell Landgraf, a 21-year-old construction worker who cast his first vote in a presidential election for Trump. “I’m afraid if it goes one way that this country will go downhill fast.”

Trump’s campaign has called for a recount in Wisconsin, where news organizations have pronounced Biden the winner by a razor-thin margin.

Protests have been scattered, small and largely peaceful since Americans went to the polls on Tuesday.

Facebook Inc said it had taken down a rapidly growing group the social media site said pro-Trump activists had posted with violent rhetoric calling for “boots on the ground” to protect the integrity of the election.

Biden supporters have adopted the slogan “count every vote,” saying a complete and accurate tabulation in the remaining battleground states would show the former vice president had won the 270 electoral votes needed to win.

Biden supporters danced to music behind a barricade across the street.

In Harrisburg, about 100 Trump supporters gathered on the steps of the Pennsylvania State Capitol Building on Thursday afternoon as part of a “Stop the Steal” demonstration organized by Virginia conservative activist Scott Presler.

“This is not a rally supporting a particular candidate,” Presler said. “This is a rally fighting for two things: truth and justice.” He said in an interview that he planned to raise funds for an audit of the state’s vote count.

Republican U.S. Representative Jim Jordan of Ohio, an outspoken supporter of Trump, said at the state capitol building he was concerned about ballots arriving in the mail without a clear postmark.

Earlier on Thursday, a state appellate court ruled more Republican observers could enter the building in Philadelphia where poll workers were counting ballots.

At least 400 protesters gathered outside the Clark County Election Department in Las Vegas. Loud patriotic anthems blared over speakers as scores waved giant Trump and American flags. Biden has a lead of just over 11,000 votes in Nevada as counting continued.

In Washington, D.C., a procession of cars and bicycles sponsored by activists from a group called Shutdown DC paraded slowly through the streets of the capital to protest what they called “an attack on the democratic process” by Trump and his “enablers,” according to its website.

Trump has said repeatedly without evidence that mail-in votes are prone to fraud, although election experts say that is rare in U.S. elections.

Democrats are projected to lose House seats but keep their majority

Thu Nov 5 , 2020
U.S. House Speaker Nancy Pelosi, a Democrat from California, speaks during a news conference at the Democratic Congressional Campaign Committee headquarters in Washington, D.C., U.S., on Tuesday, Nov. 3, 2020. Alyssa Schukar | Bloomberg | Getty Images Democrats will keep their U.S. House majority in the next Congress, according to […] 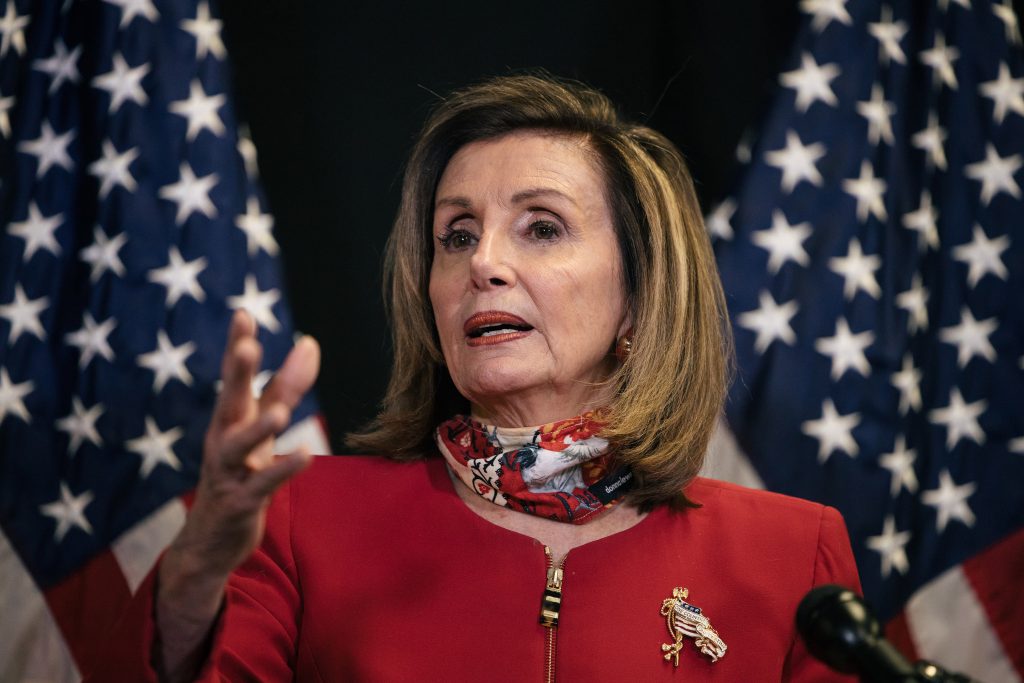