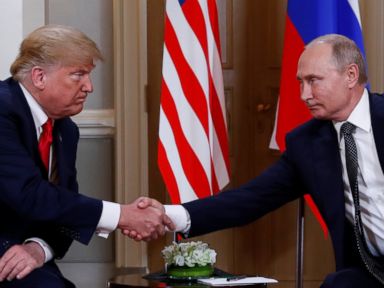 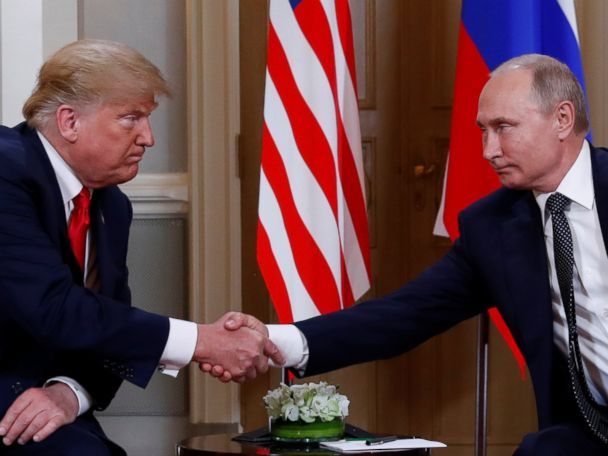 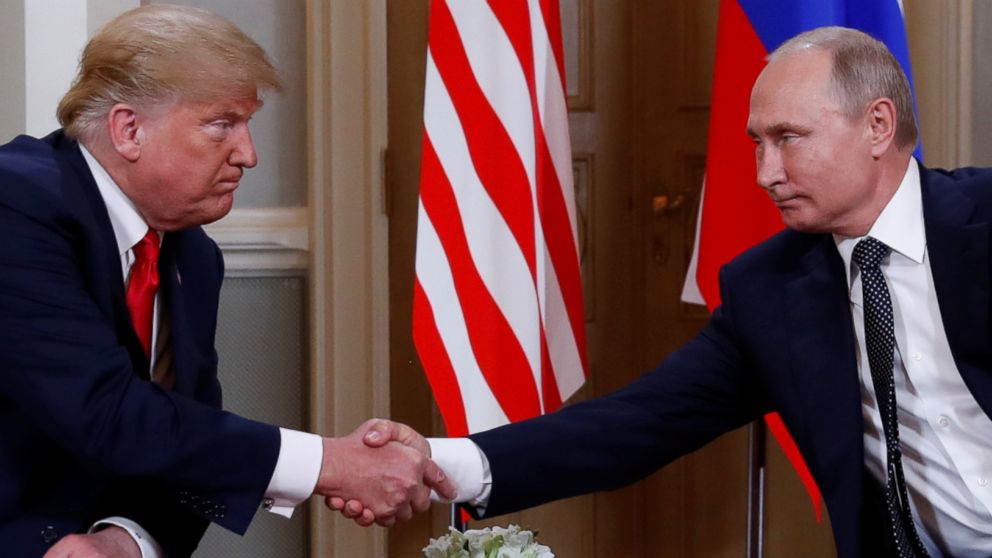 President Donald Trump and Russian President Vladimir Putin met and shook hands Monday to kick off a long-anticipated summit on neutral ground in Finland in a final –- and crucial -– stop on the president’s chaotic weeklong diplomatic tour through Europe.

The two leaders walked into a room in the Presidential Palace in Helsinki quietly. Against the backdrop of six American and Russian flags, the silence was broken when President Trump congratulated Putin on hosting the World Cup.

“I’d like to congratulate you on a really great World Cup, one of the best ever,” Trump said. “And for also your team doing so well.

“It was beautifully done,” he added, saying he watched the finals.

Trump said he’ll be talking about trade, military and China.

He said among the major topics will be repairing the deteriorating relationship between the two countries.

“We’ve been not getting along for the past years,” Trump said. “We’ll have an extraordinary relationship.

“And I really think the world wants to see us and get along,” the U.S. president added. “We are the two great nuclear powers. It’s not a good thing, its a bad thing. So we’ll be talking about that among other things.”

Trump did not make any mention of the election meddling, Syria, or the annexation of Crimea in his brief remarks.

Putin, who is known to keep world leaders waiting, arrived almost 30 minutes late in Helsinki for the summit with Trump.

After the remarks, the two leaders briefly shook hands.

Now, they’ll have a 90-minute, bilateral meeting with advisors, followed by a press conference.

The meeting happened after a week of worldwide anxious anticipation spanning from the U.S. to Europe to Russia.

Just hours before they, Trump tweeted, “Our relationship with Russia has NEVER been worse thanks to many years of U.S. foolishness and stupidity and now, the Rigged Witch Hunt!”

Trump has said he hopes to improve relations between the United States and Russia, but has placed blame for the deteriorated relationship on his predecessor, President Barack Obama, rather than Russian aggression and meddling.

When asked about his message to Putin during a breakfast at the Finnish president’s residence, Mäntyniemi, with the president of Finland, Sauli Niinistö, and the first lady of Finland, Jenni Haukio, Trump simply replied, “we’ll do just fine, thank you.”

The stakes are high for the summit. Just days before Trump arrived in Helsinki, special counsel Robert Mueller issued indictments on 12 Russian spies for their interference in the 2016 election.

News of action by Mueller added additional pressure on the president to address election meddling and hold Putin accountable for Russian aggression. Monday’s meeting loomed large over each leg of the president’s tour.

At NATO, allied leaders condemned Russian aggression in Eastern Europe, and in Britain, Prime Minister Theresa May said at a press conference with Trump she welcomes “the strong response from the U.S. on the poisonings in Salisbury.”

Trump said election interference, along with Syria, Russia’s illegal annexation of Crimea, and meddling will be among the topics on the table Monday.

“I know you’ll ask will we be talking about meddling. And I will absolutely bring that up. I don’t think you’ll have any, ‘Gee, I did it. I did it. You got me.’ There won’t be a Perry Mason here, I don’t think. But you never know what happens, right? But I will absolutely firmly ask the question,” Trump said at Chequers, May’s residence, on Friday.

Still, Kremlin press secretary Dmitri Peskov told reporters ahead of the summit that should Trump bring up interference in the U.S. election, he will “reiterate that Russia did not and could not bear any relation to the matter on which such speculations are centered.”

Over the weekend, Trump and his White House advisers tried to downplay the impact of the summit. For the White House, the meeting isn’t so much about resolving problems but building a diplomatic bridge between two countries that have not seen worse relations since the Cold War.

Trump himself said he did not have “high expectations” for their talks, and White House National Security Adviser John Bolton, who took the lead on orchestrating the summit by traveling to Moscow to meet with Putin, said the United States should not expect any deliverables or written agreements, like the joint agreement made by Trump and North Korea’s Kim Jong Un in Singapore in June.

“We have asked and the Russians have agreed that it will be basically unstructured. We’re not looking for concrete deliverables here,” Bolton said Sunday on ABC’s “This Week.” “I think it’s very important that the president has a direct one-on-one conversation with President Putin. That’s how this is going to start.”

U.S. Ambassador to Russia Jon Huntsman even said it’s not a “summit” but a “meeting” on NBC’s “Meet the Press.”

“Listen, and it isn’t a summit. I’ve heard it called a summit. This is a meeting. In fact, it’s the first meeting between the two presidents. They’ve had some pull-asides, one at the G20 in Hamburg and the other at the APEC Ministerial in Da Nang, Vietnam,” Huntsman said. “But this is really the first time for both presidents to actually sit across the table and have a conversation. And I hope it’s a detailed conversation about where we might be able to find some overlapping and shared interests. This has not happened before.”

Trump went on to call it a summit later in a tweet.

While allied NATO leaders like May were encouraging of Trump’s meeting with Putin, lawmakers at home expressed skepticism ahead of the talks in Finland and even told Trump to cancel their meeting if Trump could not guarantee a hard-line response to election meddling.

“President Trump must be willing to confront Putin from a position of strength and demonstrate that there will be a serious price to pay for his ongoing aggression towards the United States and democracies around the world,” Republican Sen. John McCain said in a statement. “If President Trump is not prepared to hold Putin accountable, the summit in Helsinki should not move forward.”

Concern has grown the president will make concessions with Russia, or come out with nothing much to show for the meeting except handshakes, smiles and photos, particularly as aides have said the president hasn’t been keen on studying up ahead of the summit, according to ABC News sources.

“Will I be prepared? I’m totally prepared. I have been preparing for this stuff my whole life,” Trump said at a rally in Montana before he left for Europe.

Trump spent the weekend before the summit at Trump Turnberry resort on the coast of Scotland meeting with advisers, tweeting and playing golf.

Early Monday and hours before the meeting, protests broke out in Helsinki calling for human rights and democracy.

It’s the first official summit between the presidents of the United States and Russia since 1997 when Bill Clinton and Boris Yeltsin produced a breakthrough agreement on arms control in Helsinki.

Other issues of world importance to be discussed include the U.S.-Russia nuclear arms race, and Russia’s alleged violations of the Intermediate-Range Nuclear Forces Treaty signed in 1987 by President Ronald Reagan and former Soviet Union leader Mikhail Gorbachev.

Another big topic is expected to be the involvement of the U.S. and Russia in the ongoing civil war in Syria.

The United States has had a military presence in Syria since early 2016 to train and advise Kurdish and Arab rebel forces fighting ISIS in northern and eastern parts of the country. Russia, a longtime ally of Syria, has backed Syrian President Bashar al-Assad, despite accusations from the U.S. and others that the dictator has repeatedly used chemical weapons on his own people.

In April, U.S., Britain, and France launched a series of strikes on three locations identified as critical to Syria’s production of chemical weapons, including a scientific research center in Damascus, and a production facility and storage facility in Homs. Russia denounced the airstrikes, warning of “consequences.”

Trump was evasive during a press conference last week when asked if he and Putin will also discuss sanctions approved by Congress against Russia for its 2014 forcible annexation of the Crimean peninsula from Ukraine.

“Long before I got here, President [Barack] Obama allowed that to happen. That was on his watch, not on my watch,” Trump said at a press conference at the end of the NATO summit in Brussel’s last week.

“What will happen with Crimea from this point on, that I can’t tell you, but I’m not happy about Crimea,” he said of the subject that has fueled the icy relationship between the White House and Moscow.

During a meeting last week, Trump heard complaints from May about the attempted murders in March of a former Russian spy Sergei Skripal and his daughter, Yulia, who were both attacked with the Russian-made nerve agent Novichok in southern England.

“The government has concluded that it is highly likely that Russia was responsible for the act against Sergei and Yulia Skripal,” May said in an address to the British House of Commons.

Last month, two other people were sickened by the same nerve agent in a town near where the Skripals were exposed. A woman, Dawn Sturgess, 44, died Sunday in a hospital; Charlie Rowley, 45, who was with Sturgess when they were exposed to Novichok, was initially in critical condition but has since regained consciousness.

Trump, however, is expected to keep U.S. interests at the forefront of the summit agenda, Bolton said.

“I think the president is going into this meeting determined to advance the national interest of the United States,” Bolton said. “That’s what he was elected to do. 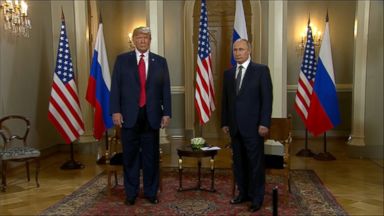