When the Columbia River Highway was built in the early 1900s, it was an instant hit with motorists. It was the first scenic highway in the United States.

“Folks called it the ‘king of roads,’ because it was so far advanced compared to anything else they’d seen for a rural highway in this country,” said historian Robert Hadlow, who knows every twist and turn of the historic Oregon roadway.

This carefully-crafted stretch of pavement was designed to highlight the best of the Columbia River Gorge. One mile, you’re perched on a scenic overlook; the next, you’re at the base of a thundering waterfall, like the mighty Multnomah.

The most scenic routes in America are known as national scenic byways. Part of a program created by the Department of Transportation in the 1990s, these roads have been given a branding boost to inspire more Americans to get off the interstate.

“Byways are really about real America,” said Anne Klenke, who is on the board of the National Scenic Byway Foundation. “Seeing what’s really there, not just what you can see from driving an interstate at 70, 80 miles an hour.”

The organization is volunteer-based. So, why do they do it? “Because we love byways,” Klenke said.

Klenke’s hometown byway is Louisiana’s Creole Nature Trail, a 180-mile collection of roads that cuts through the marshes and beaches of a region known as “Louisiana’s Outback.” It’s an especially popular drive for birders – the nature is everywhere you look.

As she and correspondent Conor Knighton took a stroll, Klenke pointed out the local flora and fauna: Wildflowers, turtles. “There’s probably alligators right there that we can’t see.”

“Woah, wait, back to that part … What do you mean There’s alligators over here I can’t see?

“They’re right there! They’re wild. Not to worry. We’ve never lost anyone.”

A thousand miles safely away, drivers hoping to spot some reptiles along the Dinosaur Diamond Prehistoric Highway will find that most of them are extinct.

“From the tops of those hills in the distance to the tops of the hills over here, is all Jurassic-age rock. This is the original Jurassic Park!” said Julia McHugh, a paleontologist who does most of her work along this byway.

The Dinosaur Diamond Prehistoric Highway is a 512-mile series of roads stretching through some of the most picturesque parts of Colorado and Utah. Long before cars traveled this landscape, it was a dinosaur super-highway.

McHugh said, “Western Colorado and eastern Utah is one of the most abundant corridors for paleontology.”

Today, there are museums along the way where drivers can learn about the region’s former inhabitants, but plenty of their fossils are still right along the road … or right under your foot. The rock Knighton chose to sit on was a vertebra – part of a prehistoric pelvis.

“It’s very easy to be caught up in getting to where you wanna go,” said McHugh. “And sometimes people forget that the journey to where they’re going is just as amazing.”

Flying cars: Ready to take off

Sat May 18 , 2019
If your memories of the past accept a “Jetsons” vision of the future, your concept of flying cars is not very accurate. But after decades of promises, it looks like flying cars are finally becoming real. A Dutch-made mash-up of automobile and helicopter, called a PAL-V, made a splashy debut […] 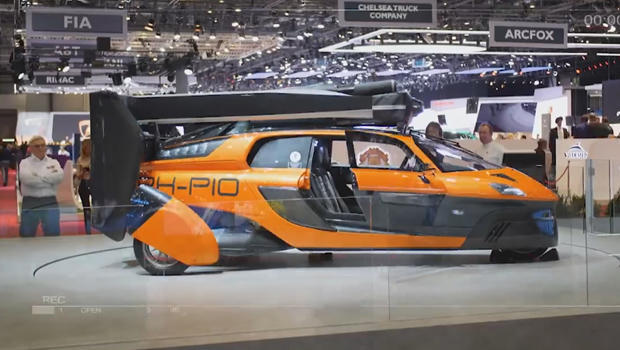