The streaming wars are generally discussed as a competition between the large global legacy media companies — Disney, Comcast’s NBCUniversal, AT&T‘s WarnerMedia, ViacomCBS, Discovery — and incumbent players Netflix and Amazon. There’s good reason for this: the products are similar, typically consisting of films, TV series, and sometimes live news and sports.

But as television becomes predominately delivered over the internet, the competitive lines between traditional media companies and online video services like TikTok, Google‘s YouTube, Facebook‘s Instagram and Amazon‘s Twitch are blurring. The differentiation that exists today — user generated content vs. scripted, free vs. subscription, short-form vs. long-form, gaming vs. professional sports — is bound to dissipate over time as each company tries to dominant consumer attention.

“Although it’s still commonplace for consumers and industry execs alike to consider cable and streaming video services as ‘TV,’ and platforms such as TikTok, Facebook, and Instagram as ‘social media,’ they’re one and the same,” said Kirby Grines, founder and CEO of 43Twenty, a strategic advisory and digital marketing firm focused on the streaming video industry. “These binary labels are increasingly becoming antiquated every day.”

Netflix caught on to this last year when it listed TikTok as a competitor for the first time. In Netflix’s opinion, anything that interrupts Netflix usage — even sleep — is competition.

But there’s a reason why Netflix called out TikTok specifically. TikTok may have started out as a user-generated music-dance video service, but thousands of creators earn salaries scripting videos for the service. These influencers are already becoming A-list celebrities for teenagers, and the crossover between TikTok and Netflix has already begun. It’s one of the reasons I suggested Netflix should seriously consider buying a stake in TikTok when it was temporarily forced into finding potential acquirers last year.

This isn’t the first foray into video for Facebook‘s Instagram, which launched IGTV in 2018 and TikTok-competitor Reels, a short-form video feature that allows Instagram users to create content with overlaid audio and augmented reality effect, in August 2020. Instagram’s move toward showing full-screen videos in user feeds suggests it wants to capture more video advertising dollars while also developing more opportunities for its creators and giving users new entertainment options.

“We’re no longer a photo-sharing app or a square photo-sharing app,” Instagram Chief Executive Officer Adam Mosseri said in a June 30 video. “There’s some really serious competition right now. TikTok is huge, YouTube is even bigger, and there’s lots of other upstarts as well. People are looking to Instagram to be entertained. There’s stiff competition, there’s more to do, and we have to embrace that.”

As legacy media companies shift their businesses to streaming, competitors that don’t have enough content or global scale are already starting to consolidate. AT&T’s decision to merge WarnerMedia with Discovery and Amazon’s $8.5 billion deal for MGM were the latest two examples, but Time Warner and Fox’s decisions to sell AT&T and Disney can both be braced to the eventually fall of linear television.

As TikTok, Instragram and YouTube become closer competitors to legacy media, it becomes easier for relatively smaller media companies such as ViacomCBS, NBCUniversal or even the combined Warner Bros-Discovery to claim they should be allowed to merge with each other or acquired by a larger competitor. It’s unclear if putting together, say, two large film studios will still matter to regulators if movies make up a fraction of entertainment viewing time.

The Federal Trade Commission’s treatment of Amazon’s MGM acquisition will be a test bed for how it views the tech industry’s move into legacy media. If the FTC blocks the deal, it’s a sign the government has moved away from a competition-based antitrust definition and more toward a “we don’t like big, powerful companies” definition, said Doug Melamed, a Stanford Law professor and the former acting assistant attorney general of the D.O.J.’s antitrust division.

New FTC chair Lina Khan has a history of thinking this way, Melamed noted. Amazon has already called for Khan to recuse herself from ongoing antitrust probes of the company, given her previous critiques of Amazon’s market power. Democratic Sen. Elizabeth Warren, D-Mass., wrote a letter to the FTC this week urging it to carry out a “broad and meticulous review” of the MGM deal, arguing it could have anticompetitive effects in the streaming industry.

But from a strict antitrust perspective, more competition among large companies should be good news for firms looking to engage in deals, Melamed said.

“If you have 10 competitors constraining you, competitors who could steal your customers, you’re less worried as a regulator than if there are just two or three,” he said.

Paradoxically, regulators may decide a more realistic approach to fighting Big Tech dominance is to support their expansion into non-core areas, said Melamed. That is, regulators could ensure Facebook, Google, Amazon, Apple and Microsoft don’t dominate an industry by promoting competition against each other and other large companies — such as TikTok or Disney or Comcast.

“It’s something academics are beginning to talk about,” said Melamed. “Maybe the best way to make sure Google doesn’t dominate search is to other big guys compete — whether that’s Facebook, or Apple, or Microsoft. If that’s true, the government should be supporting these companies in broadening their scope.”

It’s also likely to be a topic at this year’s annual Allen & Co. media and technology conference, which draws top executives from nearly all of the world’s biggest companies. That conference just happens to begin this weekend.

Disclosure: Comcast-owned NBCUniversal is the parent company of CNBC.

Mon Jul 5 , 2021
NEWPORT, WALES, UNITED KINGDOM – 2021/01/09: A shopper seen pushing her groceries outside Morrisons supermarket in Wales. May James/SOPA Images/LightRocket via Getty Image WM Morrison, Britain’s fourth-largest supermarket chain, could be about to become the target of an international bidding war. Apollo Global Management announced Monday it was mulling a […] 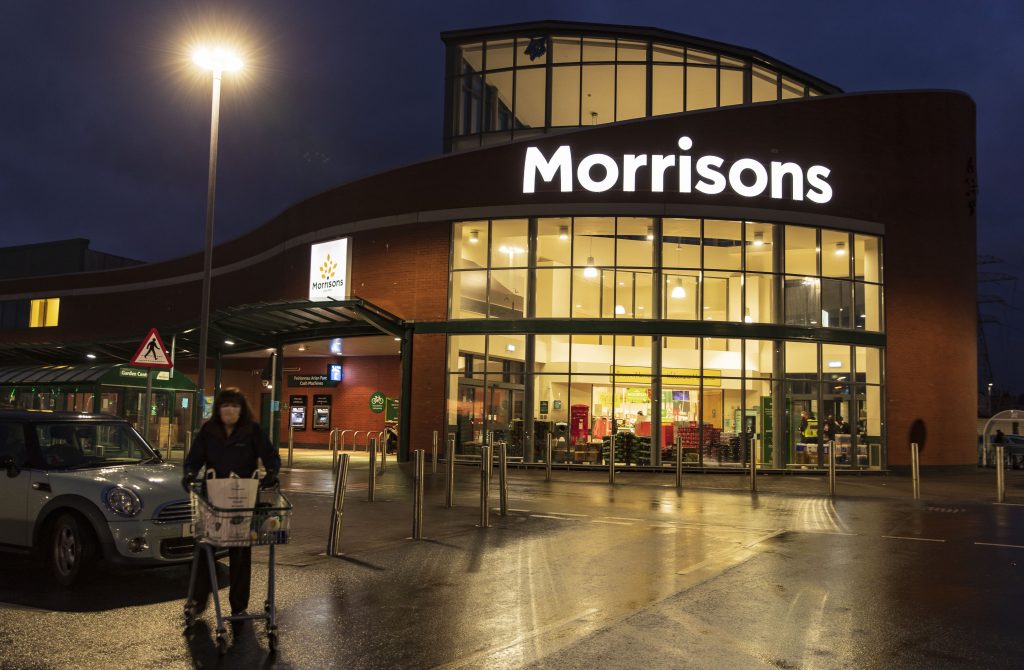