The auditorium held about 2,500 people while about 1,500 more stood outside the building in the rain, listening to what was being said inside on loudspeakers, the station added.

Jeffrey H. Finkelstein, president and CEO of the Jewish Federation of Greater Pittsburgh, began the vigil.

“After a raging anti-Semite shot up a holy place of worship on our Shabbat and murdered our extended Pittsburgh Jewish family, we needed to be here because at times like these, we need community. We need the comfort of each other. We need love, not hate, and we need that giant hug that this Pittsburgh Jewish community always gives,” Finkelstein said.

Finkelstein went on to thank all the officials in attendance at the vigil before singers performed The Star-Spangled Banner and the “Hatikvah,” the national anthem of Israel.

Speaking next was Naftali Bennett, the minister of diaspora affairs for the state of Israel. Bennett flew from Israel to Pittsburgh on Saturday night after receiving news of the shooting.

Bennett called the shooting the deadliest anti-Semitic attack in the history of the United States.

Bennett spoke about fighting against anti-Semitism “wherever it raises its head.”

“We stand together as Jews from all communities united as well as members of all faiths. Together we stand, Americans, Israelis, people who are together saying no to hatred,” he said.

Rabbi Danny Schiff from the Pittsburgh Federation and Rabbi Ron Symons from the Jewish Community Center of Greater Pittsburgh took the podium together to say a few words.

Fitzgerald spoke about how he and his wife decided to move to Squirrel Hill to live and raise their family.

Peduto took the microphone, speaking passionately about the Pittsburgh community and combating hatred.

He spoke about the toughness of the Pittsburgh community.

“We will drive anti-Semitism and the hate of any people back to the basement on their computer and away from the open discussions and dialogues around this city, around this state, and around this country,” Peduto said.

His words prompted a standing ovation from those in the room.

“Here’s another thing about Pittsburgh — we’re a resilient people. We will work together as one. We will defeat hate with love. We will be a city of compassion welcoming to all people no matter what your religion or where your family came from on this earth or your status,” Peduto said.

Finkelstein then welcomed clergy representing the diversity of the Pittsburgh community onto the stage.

As they were taking the stage, a pre-recorded video message from the president of Israel, Reuven Rivlin, was shown.

“You are not alone. The people of Israel and the entire Jewish people stand with you,” Rivlin said in the video.

Wasi Mohamed with the Islamic Center of Pittsburgh and Emgage Pennsylvania then took the microphone. Saying that at such a tragic time, paying for a funeral or medical costs should not be an issue or a concern, Mohamed said he and the Muslim community set up a Muslims Unite For Pittsburgh Synagogue fundraiser.

In just one day, the fundraiser has already collected more than $80,000 for victims and grieving families.

Mohamed went on to say their work was not finished with the fundraiser alone.

“We just wanna know what you need. You know, if it’s more money, let us know. If it’s people outside your next service protecting you, let us know, we’ll be there. If you need organizers on the ground, Emgage will provide them. If you need anything at all, if you need food for the families, if you just need somebody to come to the grocery store because you don’t feel safe in this city, we’ll be there and I’m sure everybody in the room would say the same thing. We’re here for the community,” Mohamed said.

Pittsburgh Police chaplain Rev. John Welch was the final speaker of the group.

“Our goal in working together is to make sure that Pittsburgh is a place where we can triumph over terrorism and tragedy and where we can be the city of bridges that brings together what others want to divide. God bless Pittsburgh, God bless the Jewish community,” Welch said.

Finkelstein then called to the stage the leadership of the three congregations from the Tree of Life Synagogue.

“Yesterday, on our holy Sabbath, we lost three pillars of our community. Three men who would give you the shirt off their back. Who volunteered their time and thought of our synagogue night and day. And they were always the first ones to be there on Saturday morning. We mourn their loss, but I know that they would want us to continue onward,” he said.

He went on to say, “These three men cannot be replaced. But we will not be broken. We will not be ruined by this event.”

“If I weren’t out of town celebrating Shabbat with my family yesterday, I would have been in the building. We are shaken, sickened and suffering, not just by our own tragedy of loss and injury, but for all those who share the Tree of Life building,” she said. “Although we are broken, these acts of violence will not define our hopes and dreams for the future, and we will never let hatred be the victor. Never.”

Rabbi Jeffrey Myers, of the Tree of Life/Or L’Simcha Congregation, was the final speaker of the group, calling himself a victim, survivor and mourner and giving a harrowing description of what happened.

“I began services at 9:45 a.m. The shooting started a few minutes after. There were twelve of us in the sanctuary at that time. And as in customary in the Jewish faith, and I’ve also seen it in other faiths, all the early people come and sit in the back. I helped pull out the people that I could from the front, but alas I had eight people in the back. One fortunately survived. Seven of my congregants were shot dead in my sanctuary. My holy place has been defiled. We will rebuild,” he said.

Myers went on to say the path to choosing good over hate starts with speech.

“Words of hate are unwelcome in Pittsburgh,” he said. “It starts with the people in this room.”

He then called upon the political leaders in the room, saying, “Ladies and gentlemen, it has to start with you as our leaders.” His words prompted chants of “Vote! Vote! Vote!” to break out in the auditorium.

“My words are not intended as political fodder. I address all equally. Stop the words of hate. My mother always taught me, if you don’t have anything nice to say, say nothing,” he said, to laughter and applause. “If it comes from you, Americans will listen, but let’s not forget one really important thing. Independent of what happens tonight, independent of what any of our elected officials choose to do from here on, it’s us. We the people.”

Myers said Tree of Life will rebuild “so that collectively, people will come and say, ‘Wow, that’s how you’re supposed to live your life.'”

Before closing with a memorial prayer in memory of those who died, he called on everyone in the room to endeavor be the person to end hate.

“It starts with one simple step. Just stop the hate. Don’t say it. Zip the lip. Just don’t say it. It just takes one person to make that difference. The caution I have for you is, any of you the person to do that? I leave you with that question. You have to answer it for us,” he said.

The vigil ended with a performance from the Pittsburgh Symphony.

Mon Oct 29 , 2018
Image 1 of 2 ▼ In this Saturday, Oct. 27, 2018 photo, a man rides his electric bike as the Tower of the Juche Idea is silhouetted agains the sunrise in Pyongyang, North Korea. North Korea is exploring a grand plan to become a regional transportation hub, inspired in part […] 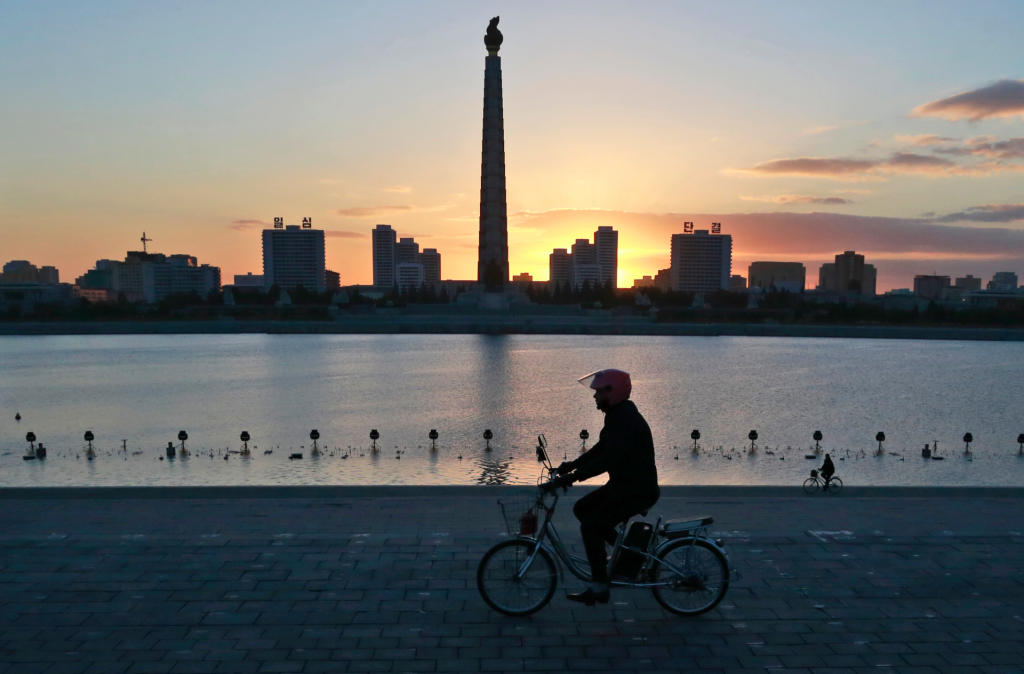