It’s time to buy calls in AT&T, according to several options traders.

With the stock’s dividend yield now at 6.3% — nearly three times that of the U.S. 10-year Treasury after its recent declines — AT&T’s current setup may look attractive to dividend-seeking investors. But the telecom giant’s unique characteristics make an options trade the better bet, contends Mike Khouw, co-founder and chief strategist of Optimize Advisors.

“You’ve got a tremendous amount of debt on this balance sheet. They’re obviously dealing with the Time Warner integration,” he said Friday on CNBC’s “Options Action.” “Usually, when you’re looking at heavily indebted businesses, the thing you’re concerned about is if they also have significant negative cash flow.”

But there’s the catch: despite the fact that it’s the most heavily indebted company in the world, AT&T actually has significant free cash flow to offset its leverage, Khouw said.

Moreover, the stock’s chart appears to be bottoming, which tends to precede a sustained move higher, said Carter Worth, chief market technician at Cornerstone Macro, calling the stock “an old-line loser that is coming to life.”

Still, even with strong cash flow, large debt loads tend to make the underlying stocks more volatile, which is part of the reason investors should consider buying options on AT&T rather than purchasing the stock itself, Khouw said.

“Let’s say … you really don’t want to reach and buy the stock despite that high dividend because you are concerned about that downside risk. That high dividend tends to make those calls cheap,” he said. “We actually see that.”

“The July $32 calls, when I was looking at that earlier [Friday], were trading for about 95 cents, and let’s consider that those were already about 30 cents in the money,” Khouw said. “That’s really 65 cents of extrinsic premium to make a bullish bet in AT&T because of that high dividend in case the price should start moving up. So, I think there’s actually a pretty inexpensive way to bet on that positive price action without taking a lot of downside risk by just simply going out and buying calls here.”

Dan Nathan, co-founder and editor of RiskReversal.com, liked how Khouw and Worth approached AT&T’s situation.

“You’re not risking a whole heck of a lot — a few percent for about a month and a half, close to two months. It’s already in the money here,” Nathan said. “The purchase of Time Warner is really setting up for this all to come together, and at some point, it’s going to make a lot of sense to start thinking about what this company looks like when they have 5G, they have the content. What does a new telco media company look like? “

For now, though, the combination of the high yield, AT&T’s bottoming pattern, and investors’ flight to safety amid escalating trade tensions made Nathan bullish on this particular trade.

“I think it makes sense,” he said. “I think at some point towards the latter half of this year you’re going to see some investors start thinking about what this company looks like in 2020, ’21, the way we saw Disney just explode once they were able to articulate putting all those pieces together and what their future looks like. “

AT&T shares lost more than 1% in Tuesday trading. The stock has gained nearly 12% year to date.

Tue May 28 , 2019
article When Lonnie Bunch started working on the Smithsonian’s first black museum, he had no collection, no building and one employee. Continue Reading Below The Smithsonian Institution rewarded the founding director of the wildly popular museum on Tuesday by putting him in charge of all 19 of its museums, making […] 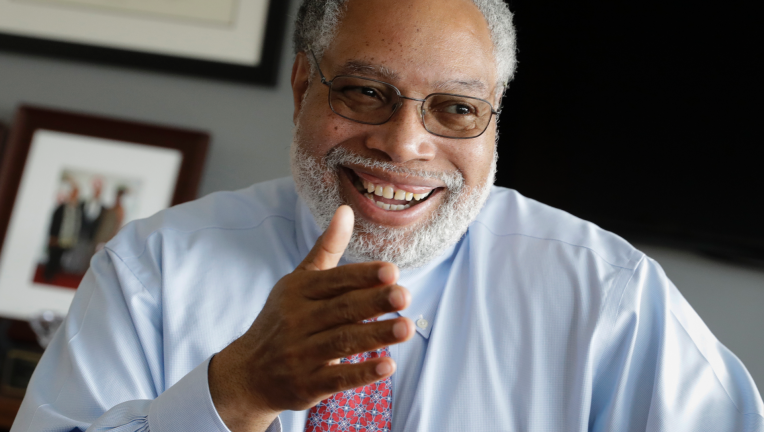