Despite the chaos at the Capitol, the S&P 500 closed Wednesday at a new high, baffling some observers.

“I think most feel this [the Washington protests] is more of a one-off situation, that this as an isolated event as opposed to some sort of bigger movement, and because of that we can look to the new government and to stimulus,” said Peter Tchir of Academy Securities.

“Look at the small cap Russell 2000. It was up 4%. The Nasdaq 100 was down 1%. That is a sure sign the market is betting on stimulus and some change in tax policy. The market is looking forward to earnings and growth down the road.”

Others agreed. “It is a bit hard to reconcile all the different forces at play, but ultimately it seems like the election is carrying the day,” said Jack Miller, head of trading at Baird.

That transition to power has come with a belief that more stimulus is coming: materials, energy, industrials and other cyclicals that would benefit from stimulus were all up 2%-4%. Banks were higher on a steeper yield curve.

“The reality that we’re seeing in the markets [Wednesday] is because the Fed will not have to shoulder as much of  the burden of fiscal aid and fiscal stimulus, which is more effective in dealing with the wake of the crisis and filling the hole left by Covid and getting us on a stronger recovery track,” Diane Swonk of Grant Thornton said on CNBC.

Tech was down due to concerns about additional regulation, and possible higher capital gains taxes.

What happened to the idea that Democrats in control of the Senate would lead to higher taxes and lower stock prices? For the moment, traders are choosing to believe that the economy will be too fragile for a broad tax hike.

Tchir notes that while raising taxes on individuals may be controversial, “raising capital gains taxes on rich people will generate far less controversy. I’m not sure the public will be upset with that.”

He also said there may be some appetite for a modest hike in the corporate tax rates, or at least a minimum corporate tax.

What’s next? “The Democrats sweeping the Georgia elections means that stimulus and the reflation trade, and confidence in the economy, is going to remain the main story,” said Alec Young, chief investment officer at Tactical Alpha. “We need clarity on the tax picture from Biden, but that will not come any time soon.”

Thu Jan 7 , 2021
Stocks rose to all-time highs on Thursday as Congress confirmed the election of Joe Biden as president. The Nasdaq Composite popped 2.1% — breaking above 13,000 for the first time — as shares of Facebook, Amazon, Apple, Netflix and Alphabet all gained at least 2%. The S&P 500 advanced 1.4% […] 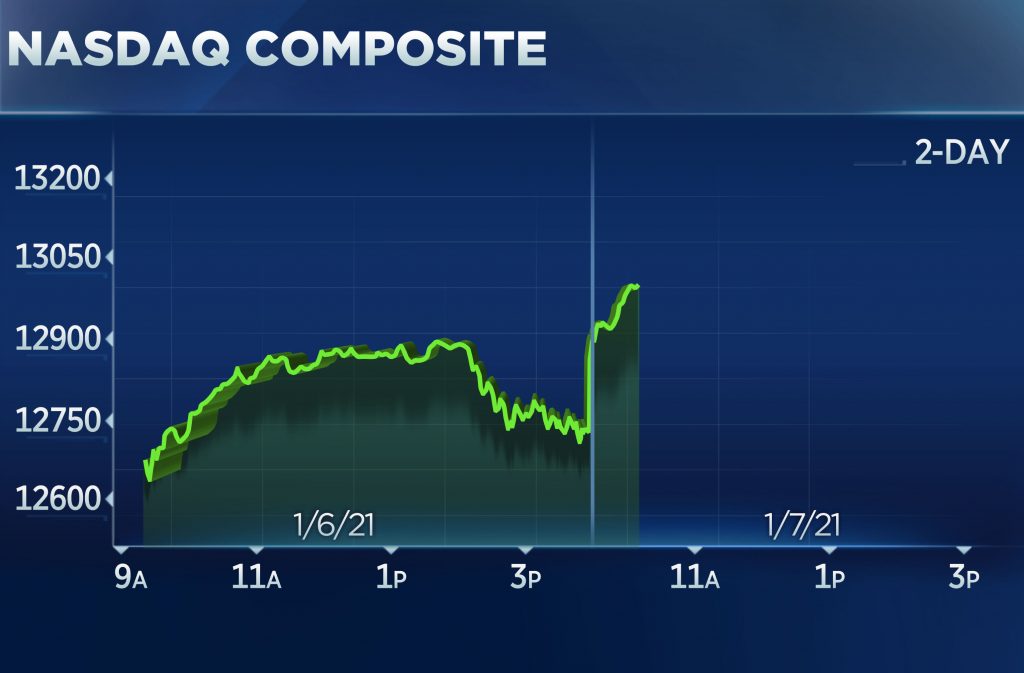