Grabbing a bottle of wine can be an intimidating task.

There are so many factors to consider: price, terroir, vintage, reputation, varietal. It’s enough to give even the most serious oenophile pause. All too often, the choice ultimately comes down to the label.

Winemakers know this. (It might hurt their pride a little, but they know it.) And, increasingly, they’re looking for innovative ways to stand out on crowded store shelves by doing everything from incorporating augmented reality into their labels to designing labels to appeal to different age and demographic groups.

“People buy with their eyes,” said James Harder, co-founder of Tank Garage Winery in Napa Valley. “When I see something — I don’t care if it’s a new car or what — if the design is beautiful, I want one. I don’t care what’s under the hood. You’re captured with that first moment.”

Last year the wine industry filled 717,866,271 bottles, according to the Treasury Department’s Alcohol and Tobacco Tax and Trade Bureau. And much to the chagrin of winemakers looking to sell those, there’s no magic bullet for making a great label. Some vineyards, like Tank, opt to keep the designs in-house, sometimes working with outside artists. Others rely on design studios, like CF Napa, to differentiate their look.

But whether they work on the labels in-house or with an outside firm, part of the key to finding what resonates with the customer is knowing what vintners want their wine (or their winery) to stand for. That’s key for the more than 9,600 wineries that make up the $63 billion U.S. wine market that have seen sales rise for the past 25 consecutive years.

Harder, for instance, tells the story of the inspiration behind Tank Garage Winery’s Lost At Last, a skin-fermented white wine blend. The California winery found itself with a rare lull in harvest season, so he and the winemakers took advantage of the downtime with a trip to Joshua Tree, the well-known national park near Palm Springs, California. There they met a photographer friend when their flight landed and decided to see what fate had in store for them.

They had a chance meeting with fans of musician Gram Parsons, who took them to the spot where the singer/songwriter’s body was cremated. They explored the park. And for a short period they forgot all about the looming work of the next phase of harvest as they took photos of the unique plants that grow there.

One of those shots was a black-and-white sunrise picture with a Joshua tree framed in the background. And that, along with the trip, proved to be the theme — and look — of the wine.

“The idea is, in order to find yourself, you have to go get lost,” said Harder.

Shoppers, of course, don’t know the backstory of the wine unless they go onto Tank’s website. But that’s intentional.

“We keep the labels really subtle,” he said. “We don’t want to give too much way. I think in the corporate branding world, they give too much away. Instead, we try to pull back and pique your interest.”

Universally, though, label designers say the right label depends on the customer you’re trying to attract. In other words, the label on a $100 bottle of wine, such as a Cakebread Cabernet. is going to be a lot different than a $20 bottle of Clois du Bois Merlot.

“You can typically put far less information on the front label [of a $100 bottle],” said Dave Schuemann, owner and creative director at CF Napa, whose extensive client list ranges from Jordan Vineyard to Kendall-Jackson to J Vineyards and Winery. “They tend to be more conservative, in general. That price point is a place you don’t need to be as reassuring to the consumer. … [For $20 bottles] there has been a strong trend toward developing lifestyle brands, something that has its own personality, and it tires to own that. It’s less about the winemaker and more about an attitude.”

Schuemann points to the Ménage à Trois line of wines as an example of that. There’s no talk of the wine’s region of origin (beyond California) or the experience of the wine maker. Instead, the label talks about taking “a walk on the wild side” and gives brief tasting notes. It’s designed to appeal to younger adults, who don’t especially care about the details a wine enthusiast would.

Two others might include Treasury Wine Estates’ 19 Crimes and The Walking Dead wine. Neither focuses on technique or vintage on their label. Instead, both offer an augmented reality experience. (The Walking Dead wines show characters and zombies coming to life, while 19 Crimes feature a criminal on the bottle who tells the story of their crimes.)

“Storytelling is a critical way to engage with consumers,” says Andrew Floor, vice president of brand and digital marketing at Treasury. “It’s a way to engage on an emotional and rational level. It’s as important for Beringer as it is for 19 Crimes. With 19 Crimes, though, the consumers aren’t that involved in the wine category or the wine experience. They know they like wine. They have a flavor category in wine they enjoy. They’re much more emotionally led.”

It was, in fact, emotion that led to the creation of the 19 Wines label. John Boyle O’Reilly fronts the flagship red. The Irish poet and rebel was sent to Australia in lieu of the gallows in 1867 and went on to be national hero there for his later literature and early work with civil rights.

Seven years ago, Treasury was looking for a way to make its Australian wine stand out as the category suffered and was struck by O’Reilly’s story. The company began talking with biographers and family members to learn more about his journey from rebel to hero.

“It’s a story that’s very true to our hearts,” he says. “It’s very emotional. It’s full of qualities like persistence and patriotism. We thought this is a great way to tell the country of origin story, to tell the history of Australia and how it came to be through the heroes and heroines, who happened to be convicts at the time. … We wanted to make a hero of the people who led that life. It was about going out and finding real-life heroes who inspired us, whose story was very interesting. And it was a great way to encapsulate the story of Australian colonization.”

A few years after launch, the company incorporated augmented reality into the labels, using the Living Wine Labels app. The technology brings the stories of each wine bottle to life by animating the labels’ photographs and prompting characters to give monologues to reveal the story behind each bottle. That has led to an even greater explosion of business.

Augmented reality might just be the future of wine labels, in fact. Schuemann says that there’s a “huge opportunity” – and not just for low cost wineries.

“I can see a message from the winemaker in a $100 wine, where he’s talking about the vintage or maybe how long he suggests you lay this wind down,” he says. “And it can change, so you can check back to see the notes on how the wine is tasting now. We’re just scratching the surface of AR.”

It’s catching on fast, though. The Living Wine Labels app, which supports five wine brands now, has been downloaded more than 1.3 million times globally. And there are more than 200,000 videos of the app in action on social media platforms.

Sometimes, though, the label is less about the artwork on it and more about location. Local wineries that are located in areas where the “Buy local” movement is especially strong can use the label to help catch the eyes of shoppers with those passions.

“The wine label helps in New York City and in retail. The design process is intimate and wants to capture the feeling of a family-owned special wine,” said Gabriella Macari, director of marketing and sales at Macari Vineyards, a family-owned winery in Mattituck, Long Island.

High-end wine labels often feature serene images. Mid-level wines regularly feature flowing descriptions of the tastes to expect. And inexpensive options may focus on experience. There are, however, a few universal truths when it comes to wine labels.

First, you have limited space — and you have to be aware of exactly what’s acceptable, as all labels must be preapproved by the Alcohol and Tobacco Tax and Trade Bureau before they go on store shelves.

Second, the label should be sufficiently unique, so if consumers love the wine, they can easily describe the bottle to friends when making a suggestion. (The wine world recently has started taking a lesson from the craft beer industry in how it utilizes word of mouth to boost sales.)

Finally, the label should make the wine look more expensive than it actually is. That way, whoever brings the bottle to a dinner can impress their friends.

“We try to make labels that look $10 to $15 more than the price point to make a value proposition built in,” said CF Napa’s Schuemann. “The consumer wants to know, Does it look like I spent money on it?”

So how much does a good label impact sales? That’s not as easy a question as it seems. Relabeling a wine usually comes as part of a larger marketing push, so is it the label? The refocused message? The marketing?

Treasury Wine Estate’s Floor points to the rejuvenation of Sterling last year. The bottles went from a dark rectangle with a sedate image to a brushed silver/chrome flowing label that features an embossed seal of the winery. That gave the wine a more sophisticated look that went hand in hand with its new slogan: “Always polished, never dull.” But Floor stops short of giving the label all the credit for the brand’s revival (which he declined to detail financially).

“There’s a myriad of things that rejuvenated the brand,” he said. “Without a doubt, the label and packaging is important [though]. It’s one of the first things that draws people’s attention.”

Fri Jun 8 , 2018
President Donald Trump on Friday suggested that Environmental Protection Agency Administrator Scott Pruitt shoulders some of the blame for the controversies that have engulfed his agency. “Scott Pruitt is doing a great job within the walls of the EPA. I mean, we’re setting records,” Trump told a reporter, who asked […] 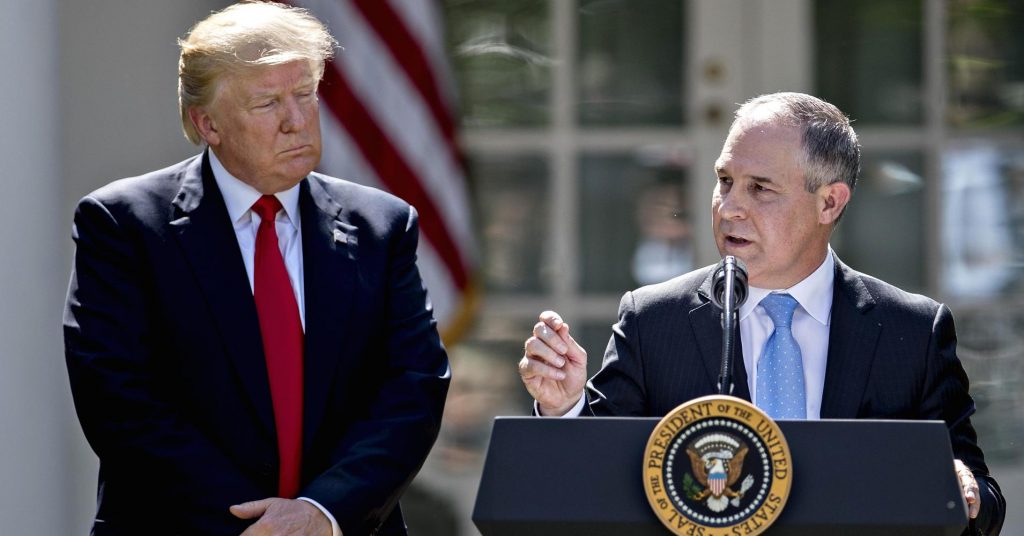