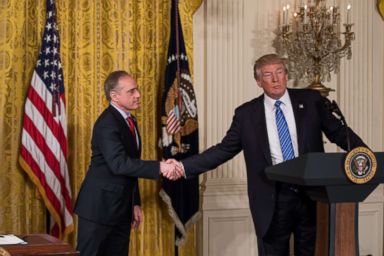 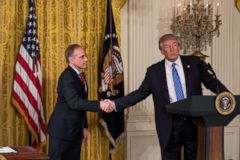 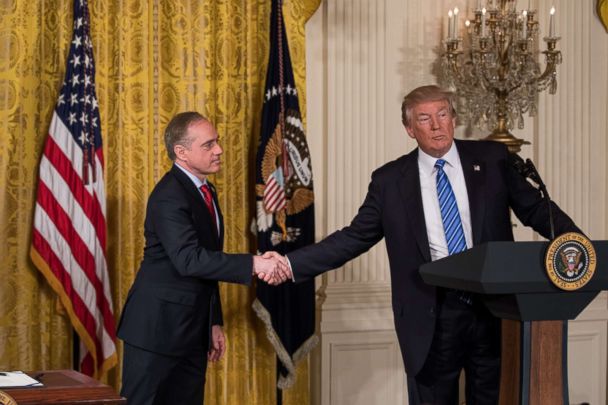 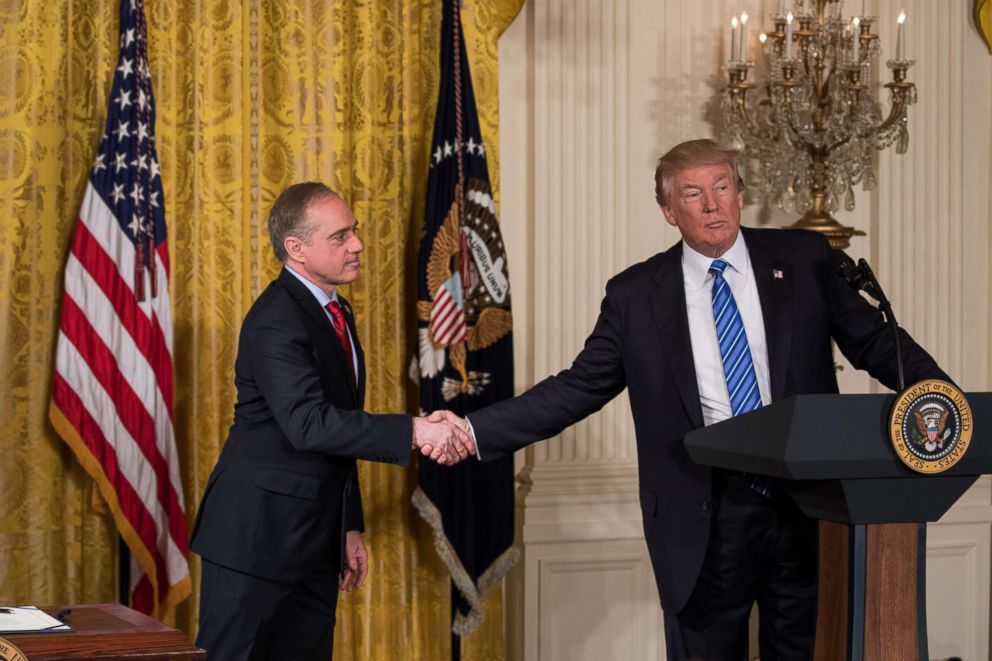 It counts as a slow week when only one Cabinet secretary is ousted, just days after an adult-film star goes on television to allege an affair with the president.

The replacement of David Shulkin as Veterans Affairs secretary might barely merit a footnote in this month of uncommon turbulence. In the past four weeks, a White House communications director, a national security adviser, and a chief economic adviser all announced they were moving on, and a secretary of state was relieved of his duties via Twitter.

But Shulkin’s firing could have the longest tail. He’s telling a story of political retribution and an agenda driven by private profits that he claims was pushed by the Trump administration’s “political appointees” at the VA – and he’s doing it on the record, continuing on “Good Morning America” this morning.

“I have been falsely accused of things by people who wanted me out of the way,” Shulkin wrote in a New York Times op-ed. “It should not be this hard to serve your country.”

Recent weeks may have emboldened President Donald Trump around his trademark disruption, with more still to come.

But when others get their own platform to respond – whether that’s Stormy Daniels or David Shulkin – the counter-puncher may find himself pulling a punch or two.

In many ways, it was the week President Trump stayed quiet.

He was quiet in the face of a primetime television program airing allegations of an affair.

He was quiet when his administration ousted Russian diplomats – and quiet on a police shooting in Sacramento that turned California’s capital city upside down.

Although one secretary is gone amid a scandal about improper travel expenses, the president didn’t offer a peep when another one of his cabinet members faced questions about his use of a Capitol Hill home tied to a top energy lobbyist.

Maybe silence will be golden for Trump. A judge has denied Stormy Daniels’ lawyer’s request for an expedited jury trial and the opportunity to depose the president and Michael Cohen, Trump’s personal attorney who has acknowledged paying Daniels $130,000 shortly before the 2016 election.

But it’s not like this president to hold back, and the silent stance could backfire, too. The longer he goes without addressing what are clearly ongoing, national issues between black communities in the country and police, the harder it will be for him to eventually weigh in with authority. The same could be true on Russia, if he goes much longer only having others push back on Putin – out loud.

The TIP with Emily Goodin

The chaos continues for Republicans in Pennsylvania – sparked by Democrat Conor Lamb’s win in the 18th Congressional District.

Republicans had expressed frustration with their candidate in that race, Rick Saccone, and, on Thursday, GOP Sen. Pat Toomey endorsed Saccone’s primary opponent in the 14th Congressional District, where Saccone is running in the midterm election.

Toomey’s blessing could help boost state Sen. Guy Reschenthaler’s bid and it also adds to the aura of defeat that surrounds Saccone after his loss to Lamb.

Across the state, retiring Rep. Ryan Costello’s decision to remove himself from the 6th Congressional District’s primary ballot leaves state GOP leaders in a tough spot.

The deadline to file for the ballot has passed and tax attorney Gregory Michael McCauley – with little political experience and even less name recognition – looks to be the GOP nominee.

Unless Republicans can find a way around that.

The party has been mum on the issue and it’s unclear what options they have. Had Costello stayed on the ballot through the primary, won that contest, then withdrawn from the race, the state GOP could name his replacement.

“I heard you’re actually the devil incarnate and I wanted to meet you.” — Secretary of Defense James Mattis joked to Trump’s incoming national security adviser John Bolton at a meeting between the two Thursday at the Pentagon.

Federal judge rejects Stormy Daniels’ request for expedited trial. Adult-film star Stormy Daniels – who is trying to get out of a nondisclosure agreement over an alleged sexual encounter with Donald Trump – might still get her day in court, but it won’t be anytime soon after a California judge Thursday rejected her request for an expedited jury trial. (Lauren Pearle) https://abcn.ws/2J7B0CH

Veterans groups respond cautiously to VA secretary nomination. Despite his active duty status as a Navy rear admiral (lower half) and his medical experience, veterans service organizations are responding cautiously to the nomination of Dr. Ronny Jackson for secretary of Veterans Affairs. (Sarah Kolinovsky) https://abcn.ws/2GkBgMY

Trump signals withdrawal ‘very soon’ of US troops from Syria, surprising Pentagon and State Department. “By the way, we’re knocking the hell out of ISIS,” Trump told a crowd in Ohio during a speech on infrastructure spending. “We’re coming out of Syria very soon. Let the other people take care of it now, very soon. Very soon, we’re coming out.” (Elizabeth McLaughlin and Conor Finnegan) https://abcn.ws/2uwUrBQ

In Senate race showdowns, tough odds for Democrats fuel Republican hopes. Republicans’ best chance of keeping control of one chamber in Congress most likely lies in the Senate. http://abcn.ws/2GKn1BK

US set to request five years of social media history for all visa applicants. The move is a major expansion of President Donald Trump’s effort to implement “extreme vetting” and change how immigrants and visitors to the U.S. are processed. (Conor Finnegan) https://abcn.ws/2pQ3iJX

Russia to expel 60 US diplomats in retaliation for response to spy poisoning. The move is part of a tit-for-tat retaliation against the coordinated wave of expulsions of dozens of Russian diplomats ordered by the United States and other countries earlier this week. (Patrick Reevell) https://abcn.ws/2Gmnycl

Alarmed by cuts and lack of leadership, 200 US diplomats call on Congress to defend diplomacy. Over 200 former U.S. ambassadors are ringing the alarm about a “crisis” in American diplomacy and the urgent need to restore its power and influence in U.S. foreign policy. (Conor Finnegan) https://abcn.ws/2GXeQTe

President Trump attacks Amazon again in new tweet. “I have stated my concerns with Amazon long before the Election. Unlike others, they pay little or no taxes to state & local governments, use our Postal System as their Delivery Boy (causing tremendous loss to the U.S.), and are putting many thousands of retailers out of business!” he wrote in a tweet. (Meghan Keaneally) https://abcn.ws/2pQuBUo

Trump bids farewell to close aide Hope Hicks. The goodbye left Hicks tearful, according to a West Wing staffer who joined with Hicks and another staffer in her office following the presidential farewell. (Jordyn Phelps) https://abcn.ws/2GBKurp

The Washington Post reports on a GoFundMe launched by former FBI Director Andrew McCabe to help with legal costs. So far, the donations have exceeded expectations. https://wapo.st/2GnKLLk

The Note is a daily ABC News feature that highlights the key political moments of the day ahead. Please check back Tuesday for the latest.

Fri Mar 30 , 2018
Working from home is a terrific perk that countless employees benefit from today. In fact, it’s estimated that 34% of workers do their jobs from a remote location. That said, working from home isn’t a right, but a privilege. And until you earn it, you may have a hard time […]